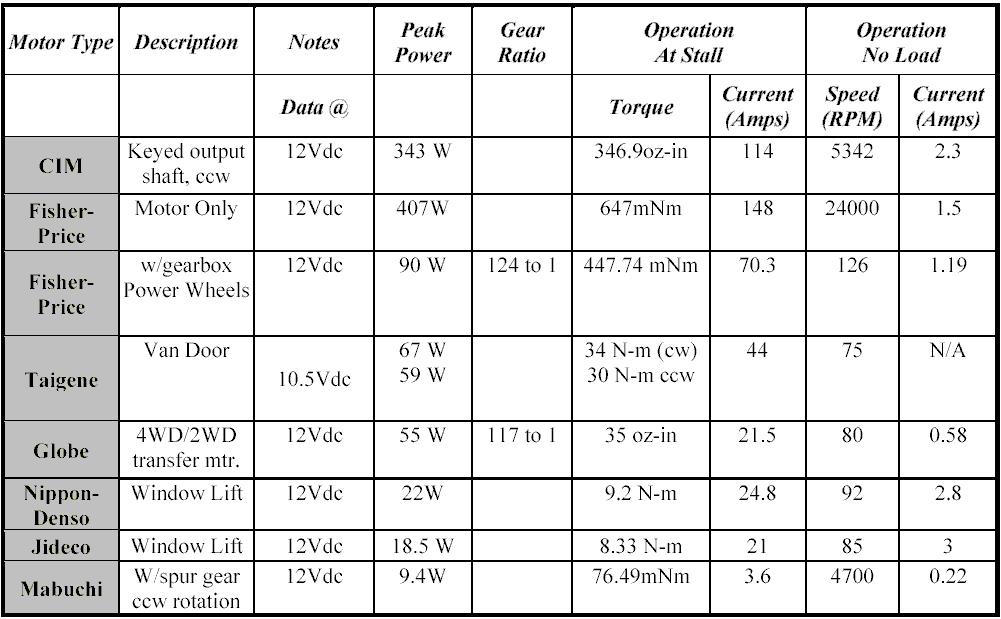 I’ve seen a lot of requests for this data, so here it is. It was obtained from page 7 of the “FIRST Guidelines, Tips & Good Practices” document.

Thanks so much karthik. This will help a lot of us.

you are a genius! Thank you so much!

I noticed the Fisher Price motor peak power is 407W, while the motor with a gearbox is 90W peak power. I cannot imagine how bad a gearbox it would take to reduce the power from 407W to 90W.

I know there has been some confusion regarding part numbers and spec sheets, so that might be the reason. Any clarification will be great!

I can’t do it, or it’d have been done already – but, can someone move this thread to the Motors forum and sticky it to the top?

The F-P with the gearbox is obviously wrong.

It is easy enough to convert the data to 12V, but the range is more problematic.

to pull the print or perhaps even see if they have some dyno data on this motor next week some time.

One more thing:
There are a lot of notes that talk about the 407W being a scary number for that small motor. Find these notes and read them before you decide to actually try to get that much power out of those little beauties.

The Globe motor data is also wrong. The gear ratio is misplaced. I think the torque data is for the motor only. I will track it down.

The Van Door motor has advanced timing in the CW direction, hence the double specs. Also, to me the specs for the Fisher Price motor with gearbox seem to be taken at 6V, while the motor without gearbox are taken at 12V.

Are there any updates for the correct motor information yet?

Did you even read the thread you posted to?

The first post in this thread documents the specifications of the motors provided in the kit as provided by FIRST. You can generate power curves using this data.

Here’s the spreadsheet I’m working from. I stole karthik’s chart and tweaked it a bit - there are some curves on the second tab. Thanks also to JVN for info in his DesignCalc workbooks. I fudged the FP gearbox torque: multiplied the motor torque by the gear ratio (the listed torque is 69% of the motor only, so I used that for the efficiency factor).

I can’t say I have a whole lot of confidence in some of the data supplied by FIRST, however. The CIM data looks good, but as Dr Joe, Paul and others have noted, there are some glaring discrepancies for some other motors. I can’t reconcile the torque they give for the van door motor with what we did with it on our tower last year. I guess having questionable data is better than no data…

Question from the floor?

Why is the stall current on the FP motor different from the FP motor with gearbox? If the motor is stalled, how does it know or why does it care that there’s a gearbox attached to it? Shouldn’t it have the same resistance and stall current whether you stop the rotation on the output shaft, or the motor pinion, or anywhere in between?

Oops, I see that Mike Betts asked the same question in the FP pinion thread. I’ll wait and see what all the empirical data provides.

The Van Door motor has advanced timing in the CW direction, hence the double specs. Also, to me the specs for the Fisher Price motor with gearbox seem to be taken at 6V, while the motor without gearbox are taken at 12V.

Can anyone help with a question related to the “Intro to Motors” [Heinzmann & Mikus] presentation posted on the 2005 Kick Off Workshop List? Near the end they list a “simple strategy” of assuming a higher motor resistance to calculate a new power curve. They then say to “operate at half the new peak power”. I’m wondering if it was supposed to say “… half the new peak torque”. Half of the already greatly reduced power seems REALLY low.

So are we in agreement then with the specs that were in the excel sheet?

I updated the spreadsheet, with a few corrections and new data - attached here. I haven’t heard from Brandon if I can update the link in my post earlier in this thread.

I would use THIS SPEC for the Taigene motor.

I updated the spreadsheet, with a few corrections and new data - attached here. I haven’t heard from Brandon if I can update the link in my post earlier in this thread.

Hold on a sec…
I think the oz-in numbers are wrong on the van door, jideco and denso. They’re WAY too low. lb-ft numbers look right though.

ok…maybe I should investigate before I speak… When the numbers were converted from Nm to oz-in, they used mNm to oz-in conversion. I’ve fixed them, assuming that the spec actually is Nm and not mNm.