Alright, so now that Palmetto is functionally full, I guess it’s time for the talk to begin about 2005.

I also notice we’re picking up a few new faces…179 with 180 should be sufficiently loud, and I’m going to be interested to see how this batch of five rookies are going to perform. We seemed to get some pleasant surprises last year, didn’t we?

So, who all is coming?

<edit>By the way, I’m going to work on a guide to the USC campus, especially the eating part. I had no idea there were this many options until I got on campus. Palmetto-goers, fear not: there is more to eating in Columbia than the Colonial Center and Wendy’s!</edit>

Well, as you mentioned before, my team (team 11) is coming again to South Carolina Again this year. We decided that the 14 hour bus ride from New Jersey was worth it. We had a great time last year, and of course, winning the regional was fun too. See you in the spring!

S.P.A.M. is ready to come back again!! we had fun at palmetto-- liked the cool weather too–change for us but it’s all good

It looks like we won’t be returning to Palmetto. The trip was expensive, but it was worth it - we had a lot of fun, we actually did well in the competition, we won the Sportsmanship award, and we made a lot of friends on 393 and 507. We’re signed up for Detroit and Great Lakes, and we’ve never gone to more than two regionals.

C’mon, I need another crack at riding in your van back from Sonic. This time, I won’t go headfirst into that parts washer, I swear!

(long story, and sort of an in-joke)

Alright, now I’ve got some motivation for y’all to come to Palmetto beyond great robot action…

USC’s putting in a new wireless network, which guests can get access to (provided your system is patched up properly). The network only opens up http access, but it’s enough for me to check ChiefDelphi from the couch in the Preston lobby.

I have not been down to the Colonial Center to test access, but you definitely can get access on the Horseshoe, which is a couple of blocks uphill. (If you’re looking at a USC map, the wireless network goes functionally from the Horseshoe to Swearingen–perhaps the Bates area at the south end of campus. I don’t believe that Computer Services is aiming the network down to the Colonial Center area.)

And I’m still working on that campus guide slowly but surely…expect it after ship day.

25 can literally not wait to get down there and experience the “southern” play style and a “foreign” regional. Annapolis is the farthest weve gone for aregional before, and we saw many famliar faces there, hopefully we will meet a lot of new people and make them familiar faces. Im sure its gonna be a great time.

Glad to see this thread opened up … we are deep into the planning to make this the best regional yet. Following all of the teams input from last year, we are making all of the recommended changes that we can…i.e. large projections screen in the pits, walk through in front of the playing field so teams don’t have to climb steps then come down…and so on. We are trying to incorporated as many of those type of changes, as possible. We are excited about the teams that are joining us this year. Great group with a lot of diversity. Stay tuned to this thread as we will be posting more information as it develops. Also, go to the Palmetto Regional website located on FIRST and check in…updated information is starting to appear. Again, we look forward to hosting the second Palmetto Regional and we wish all the teams the best of luck…we (343) will be seeing many of you in FLA a couple of weeks earler.

Alright, as a bit of a prelude to my planned guide to the USC campus, I present…

Alright, so the nearest Krispy Kreme store to the event site, the Colonial Center, is about two miles away. Trust me, it is not something you want to walk to. But hey, we all have our cravings.

Note that if you follow Mapquest’s directions, you’ll not only start at the wrong spot, but also potentially contend with construction traffic. (Do NOT plan on being able to go from Assembly to Greene–it is blocked for utility construction.)

Starting from the fountain in front of the Colonial Center, you should be able to see the Carolina Coliseum on your left, and further beyond that is the Strom Thurmond Wellness and Fitness Center. These points are important to get headed the right way, and they’re really hard to miss–the Strom is bright yellow and new, while the Coliseum is gray and…not new. With that said:
[/size]

(And by the way, feel free to hook me up with some if you’re going. :rolleyes:)

The Palmetto regional was by far the best regional our team has ever gone to. The weather was beautiful, the venue was great, and it was awesome to just be there. Im glad to see so many new faces coming to the regional also (ie. 179 and 25). You guys are in for a real treat.

Of course 845 Cutting Edge will be back in our home regional. Good luck to every one!

Yes Good 'ole palmetto, can’t wait to see how much diversity of teams there will be this year from different states. The only thing I hope to be better this year is the social. I mean seeing a dude in a chicken costume was interesting but not quite what i hoped for. Anyway good luck to everyone, live long and prosper or whatever.

Can’t wait! :ahh: 1251 will be up at Palmetto can’t wait to see the competition our first year there so it should be a great time . 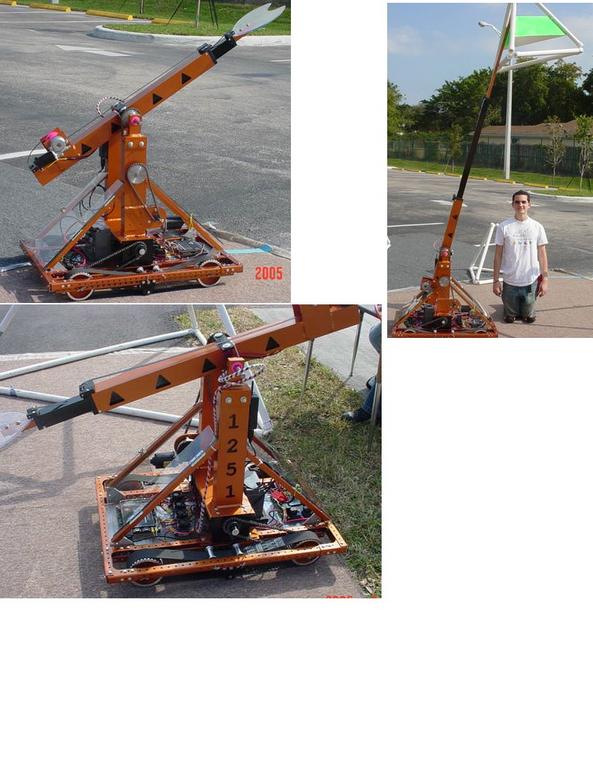 I mean seeing a dude in a chicken costume was interesting but not quite what i hoped for.

Personally, as long as the pizza’s there…

The Palmetto regional was by far the best regional our team has ever gone to. The weather was beautiful, the venue was great, and it was awesome to just be there. Im glad to see so many new faces coming to the regional also (ie. 179 and 25). You guys are in for a real treat.

Thanks for the comments…we are working hard for Palmetto to be the best…Great that you guys are headed back…Good Luck.

Yeah, the Palmetto regional was great last year…I’ll be there…sporting my Clemson gear!

Personally, as long as the pizza’s there…

Anyways, I still think the guy in the CHICKEN suit was corny. The Tigers are by far better.

the mascot was on our bus…trying to give us directions to the social…lol…we got lost w/ the mascot on our bus too but that’s okay…we got there and had tons of fun… i can’t wait-- only 4 s.p.a.m. girls including me are going so it’s gonna be interesting for me but all wellz…yeah the dancing signs…what fun they are when they are up…can’t wait for this trip though…week after spring break so yay!!

I would like to append my prior my prior guide to finding Krispy Kremes. They aren’t ten seconds removed from the production line, but they’re close.

After finding a slew of receipts from Carolina Dining, it has come to my attention that the Grand Marketplace and the Sidewalk Café sell Krispy Kreme donuts. (The receipt says KK donuts, and now that I think of it, they sure did taste like Krispy Kremes.)

I’ll take this opportunity to run down my experiences with Carolina Dining:

In the Russell House University Union
(Take Greene Street (the one that runs between the Koger Center and the Coliseum) and keep walking straight. It will be on your right, across from Preston and Woodrow Colleges.)

Grand Marketplace - First floor - The Grand Marketplace (or GMP, or “gimp” as students call it) place has the variety, and is about the largest place to eat in the building. There is a line for sushi, subs, standard cafeteria-like food, burgers, soups, and salads. And they have the all-important Krispy Kremes, as well as a Coca-Cola fountain (rare, as USC is largely a Pepsi school.)

Sub Connection - First floor - Sub sandwiches, about the same as those in the GMP. If you have a choice, pick Beezer’s, which I’ll cover in a later post.

Zia Juice - First floor - Smoothies, aimed to be health-conscious. A bit pricey for someone on a meal plan, but if it’s your thing, go for it. To satisfy your ice cream fix, go to Marble Slab upstairs.

Pandini’s - First floor - Italian food. Sometimes good, sometimes not, always expensive. Stick to the pizza and the pasta, and expect to pay at least $6 for an entree and the drink. (And whatever you do, do not order extra breadsticks.) This is also a Coca-Cola restaurant.

Einstein Bros. Bagels - Second floor - The best breakfast place on campus. Period. They’ve got bagels of all sorts, along with milk and caffeine. Lunch is good, too.

Marble Slab Creamery - Second floor - Their ice cream will blow your mind. It does come at a cost, though; expect to spend four bucks on a cone with a mix-in, more if you have to have every kind of berry in existence. Closed Saturdays.

***(Note: I’m leaving out a few places, such as the Bates location, because I don’t reasonably expect anyone to navigate the USC campus, or walk too far from the Colonial Center for their grub.)
*
Cooper’s Corner - Thomas Cooper Library (Right before you see the Russell House, on the right side of Greene Street, across the reflecting pool) - Coffee, soda, ready-made sandwiches, chips, and cookies. If that’s all you need, you may want to try this place instead of the Russell House, as it’s usually quiet. You’d expect that in a library.

Fast Break - Carolina Coliseum (down in the bottom, where classes are held–the far side from the Koger Center) - Similar to Cooper’s Corner.

Sidewalk Café - Welsh Humanities Building (Walk to the Horseshoe, then go all the way back, then pass McKissick Museum in the back, then cross the bridge. Welsh is the building in the back of the courtyard in the building.) - Similar to the above, but it also has some hot items such as hot dogs, Krispy Kreme donuts, and Coca-Cola. It’s the longest walk in this list, and I only recommend it if it’s nice outside, as the seating is outside.

For hours of all the locations on campus, go to http://www.sc.edu/dining/letseathours.pdf

For what Carolina Dining says about the locations, visit http://www.sc.edu/dining/brochure_2004-2005.pdf