So who’s coming to the San Diego Regional this year?

So who’s coming to the San Diego Regional this year?

Our team is going through a raging debate between San Diego, NYC and Finger Lakes for week #2. As of now San Diego is winning with about half the votes counted.

After doing some research, it looks like a great event and obviously a great town.

One question… Any word on whether there will be a social on Thursday or Friday? Hopefully we will see you in March.

I’m not sure if there will be a social. Most likely there won’t, but things can change.

If you stay in one of the hotels across the street from or in the same neighborhood as the venue, there’s several beaches and parks within walking distance. If there isn’t going to be a social, perhaps one of the local teams can plan something at a park or beach.

Team 1323 is debating between San Diego and Silicon. We hope to make it to both if we have the money.

Miss Daisy has officially registered for San Diego and I have to say that we are very excited to be making the cross-continental journey! Due to the change up in regional scheduling this year we can’t go to our usual regionals but I have to say I am not disappointed to be visiting some fresh new teams and making some new friends! Can’t wait to see you all there in the spring!

Also, I hear there’s beaches? Any good ones our team should check out?

Also, I hear there’s beaches? Any good ones our team should check out?

Mission Bay/Beach is the closest beach to the event. There’s lots of stuff to do there, including Belmont Park, which is home to the historic Giant Dipper. There’s also several good restaurants right on the board walk. We took team 1998, a team we were hosting from Michigan, here last year and they had a blast.

Ocean Beach is the next closest. This is home to the longest pier on the west coast (over 1000 ft long). It’s also considered a mecca for antique enthusiasts. Also another good place for food. Hodad’s is about 2 blocks from Ocean Beach and is probably one of the best burgers in San Diego.

Pacific Beach is just north of Mission Beach. In fact there’s a boardwalk connecting the two beaches. A good place to go if you have an extra day. The concentration of bars makes it much more adult oriented at night. However, if you do have an extra day to spend, it’s worth the visit. Lots of thrift shops, restaurants just blocks from the beach. One of the best places to get breakfast is at Kona’s. Just make sure you have enough time. The line is usually a block or two down the street.

Any beaches beyond those three and it’s going to be a bit of a drive. If you’re staying near the venue you should be able to get to any of those beach withing 10-15 minutes by car.

If anyone is brave enough to go snorkeling, La Jolla Cove is pretty awesome. I’m not sure if all the fish and sea life are around in March, and the water would be quite cold, but it was very cool the time I went there.

If you twitter a reply to @FIRSTSD, it will be retweeted to everyone following FIRSTSD.

My goal is to offer a way for anyone at the San Diego Regional to Twitter with others at the regional.

For more details of how to use this Twitter account, and how it works, go to http:\www.robokong2493.com witter_accounts.html

Good luck and see you at the competition!

The URL gets kind of messed up for some reason, I believe it should be http://www.robokong2493.com/twitter_accounts.html

Oh I’m required to be there…

I’ll be there.
Volunteering, i hope

IF anyone gets back to me (hint hint john jack) 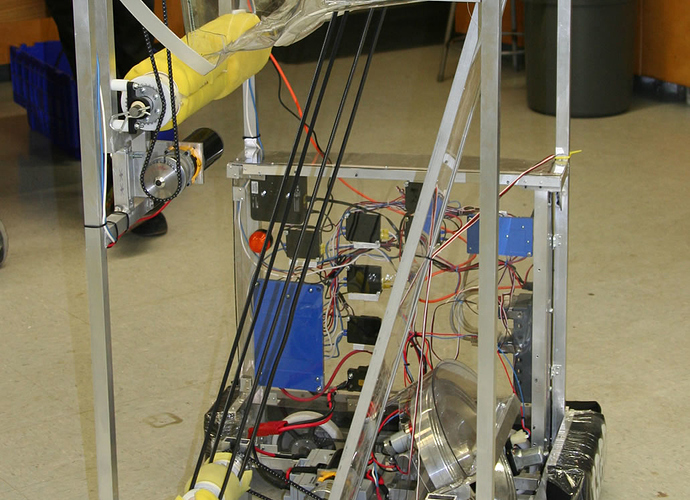 It’s a few days earlier than we wanted to show this off, but who cares. Gyration, meet CD. CD, meet Gyration. For the few of you who wanted to see a control movement gyroscope on a 2009 bot, you’re in luck. We managed to cut a few pounds here and...

At the beginning of build season I thought about doing something like this, and then came up with a hundred reasons why we couldn’t/shouldn’t do it.

You have proven me wrong.

This was one of my ideas too. I am thoroughly excited to see this on the field.

We are flying out in the morning. Can’t wait to play in SD.

Dang it, I knew we should’ve gone to San Diego.

Andy, you’re our head ref? Oh now I’m VERY excited. I will be a scorekeeper.