This off-season our team decided to design, build and program a turreted 2017 fuel shooter.
Decided to post it now since some parts of the project may be relevant this season.

nice design, any thoughts on how you would funnel balls up into the hood?

Decided to post it now since some parts of the project may be relevant this season.

It kills me to see all that hard work go to waste. Why, oh why didn’t you share this prior to kickoff instead of waiting until afterward?

R15. Software and mechanical/electrical designs created before Kickoff are only permitted if the source files (complete information sufficient to produce the design) are available publicly prior to Kickoff.

the shooter itself was uploaded to grabcad prior to the kickoff so its completely legal. (you can check the upload date in the grabcad page)

we had another sub system with a single 775 motor that funneled the fuels up, it wasn’t too good tho, it always had 3 fuels left in it after shooting so its not very relevant this season. 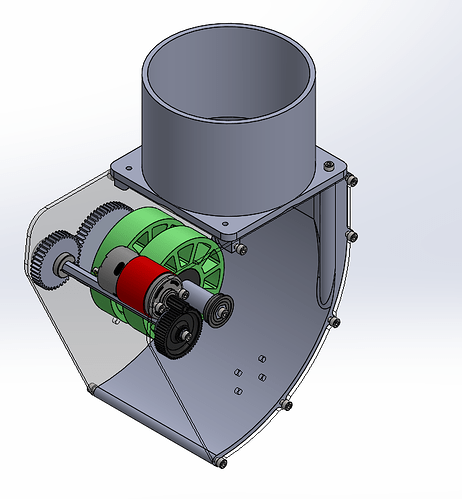 Sweet. Do you have any photos or video of it operating?

I only have a video of the turret moving. I’ll be able to send some more videos of it actually shooting later today. (Keep in mind - the front plate is missing in the video)

Nice! Any lessons learned, or things you’d do differently you be willing to share? This looks remarkably like the turreted shooter we built in 2012.

the only major problem we had was with the feeder, it applied so much compression to the ball to the point where the fuels wont move, so we cut the outer part of the compliant wheels (and made them about 3" in diameter). we also tackled some problems with 3d printing the hood. the bed adhesion wasn’t good enough so the top part of the hood was sort of angled a bit. (that’s solvable by adding supports for the side the print)

I didn’t catch that the hood was 3D printed. Nifty.

I really like your feeder design. Is it able to feed out every ball, or does one get left behind between the feeder and the shooter? One of our problems was that the balls were delivered slightly differently to the shooter depending on the orientation of the turret. This resulted in variability in the shot trajectories. The cylindrical section of your feeder seems to solve this problem.

Unfortunately between 2-3 balls get stuck inside the feeder. We haven’t tested it enough to tell whether the orientation of the turret affects anything, but we plan on doing some tests on the new field in the next couple of days, so we’ll see how that goes.

Yesterday, we got the vision worked out on the turret, and it now auto adjust as can be seen in the video.

That is Beautiful! Just for grins, could you mount a laser pointer on the side of the hood, so you can see the aim spot on the target? That lets you evaluate how well you are tracking azimuth without actually shooting balls. It’s one of my wildest dreams to have an FRC bot which can drive anywhere near a vision target and have it hold a laser pointer spot centered on a vision target. Once you can do that, you can keep the same code for azimuth and tweak the elevation code to control shooter wheel speed instead. That gives you the holy grail: accurate scoring while driving.

Your testbed gives you a huge leg up. Congrats on a good choice of summer development project.

Thanks for the great suggestion, we are going to mount a laser pointer to the shooter soon.

tweak the elevation code to control shooter wheel speed instead.

Can you clarify please what you mean by “elevation code”?

Awesome! Where did you source the turret timing pulley/sprocket?

We cut the plate sprocket ourselves on our CNC router. It’s just flat 3mm sheet, no bevel added or anything. The chain is well tensioned (to reduce backlash) so there’s no real play between the sprocket and chain despite the gap between chain plates being larger than the plate width.

Can you clarify please what you mean by “elevation code”?

If you’re using vision to keep a laser pointer pointed at a target, you are controlling azimuth and elevation of the pan/tilt mechanism on which the laser pointer is mounted. In a shooting game, the “pan” algorithm would be tweaked to control a turrent or the steering of your drive train. The “tilt” code would be tweaked to adjust your range, possibly by adjusting the angle of your shot, or the speed of your shooter wheel. Your first task would be to instantly be able to hit your target wherever you stopped to shoot. The next step would be to integrate knowledge of your robot’s motion relative to the target (from drive train sensors) to accurately hit the target while on the run.

OK, so if I understand correctly what you said, you suggest putting a laser pointer which will indicate whether, and how fast, the turret/drivetrain aim at the vision target?

Better late than never. As far as I can tell there’s no rule against gaining inspiration from CAD created before but released after kickoff. I agree that teams should make their designs/code public sooner.