And we’re not all in violation of G3 any more!

I suspect the team updates will be smaller and less impactful this year. Aside from I1-I5, there aren’t many problematic or contentious rules. Specifically, no yellow cards for normal match play or other disproportionate penalties.

The G9 definition of travelling

They have to change that interpretation of traveling, or else the rule is completely unenforceable. Any ball loaded into a robot that briefly leaves contact with the robot at any time (eg bouncing around a hopper) while that robot drives down the full length of the field would technically break the rule in that interpretation.

That’s just a case of where everyone knows what the intent of the rule is, and a good standard to enforce it (i.e. using the definition of control). It’s simply an error. I wouldn’t count changing that as an “impactful” change, since it wouldn’t change how refs call things.

Compare it to the change to defensive rules (contact inside frame perimeter) which led to yellow/red cards last year (and the whole issue of unwritten rules).

Am I missing something on the updated definition of control? It sounds like a robot can have 5 powercells inside the robot and herd more than that as long as they don’t change direction?

The definition hasn’t changed. It was the same prior to the update and simply was reformatted to correct the lettering.

Q&A opens tomorrow. Expect that to be a top question

It really shouldn’t be. This is merely a slightly different wording for the standard FRC verbiage used to describe “herding”. This line is clearly intended to be interpreted like the “herding” bans in the 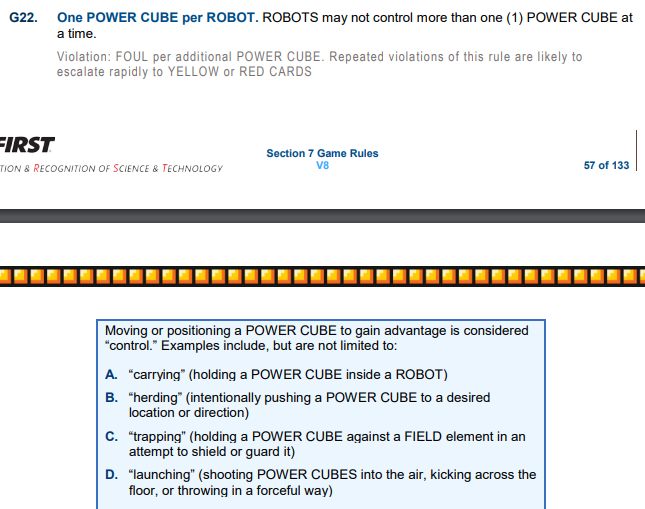 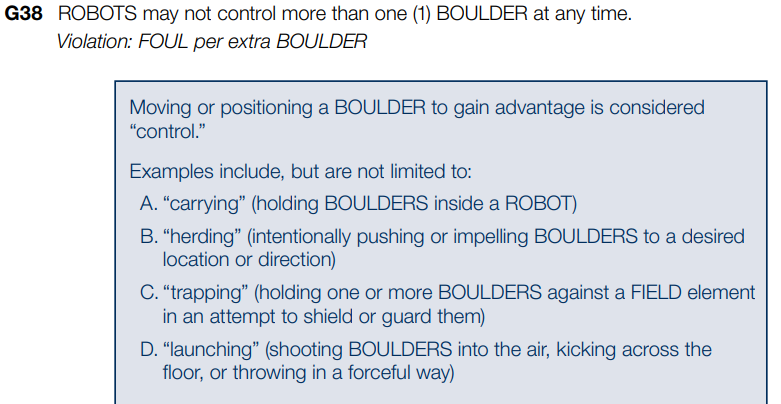 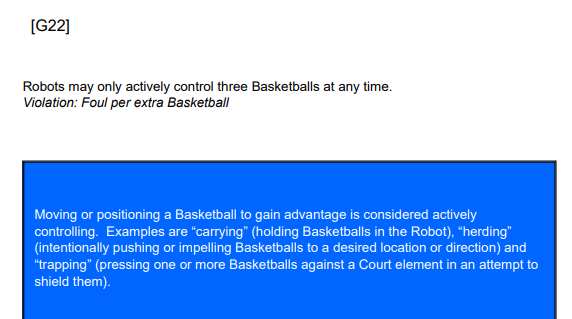 Its almost like they copy paste the rule manual every single year and only update the relevant rules and names. I recall at least one year since 2017 where the initial Tuesday Team Update contained a change removing the previous game’s game element name and replacing it with the current game element.

wait i read the 2017 rules wrong about the gears
“We must carry the gear. Can’t push it across the field.”

I agree that they re-use a lot of the wording (for good reason) but I disagree that if this definition of control is close enough to the previous definitions, they removed the wording about intent that is in all the previous years you list. I do see your point about the change of direction not needing to occur to be controling a cell, but the removal of intent language still seems a strange choice because with the current definition of control, a robot could be carrying 5 balls and have a kicking mechanism to propel balls in front of it without needing to worry about intention.

Intent was never required, it was merely an example. (as stated by the top of the blue boxes)

Under this definition that lacks any mention of intent, the rules would be MORE strict, not less, because even unintentional contact with a ball can be CONTROL per part B.

That quote is fancy engineer speak for “the game piece moves in the direction the robot is pushing it, but it is not rigidly mounted/attached/stuck to the robot with some form of manipulator.”

Yes, that was my understanding of the 2011 rules as well. The inclusion in the 2011 rules about the pieces not staying in the same relative position helps to clarify the meaning well. My point is that the piece changing position relative to the robot when the robot changes direction is a juxtaposition with the 2020 rules
“B. the POWER CELL travels across the FIELD such that when the
ROBOT changes direction, the POWER CELL travels with the
ROBOT”
If a kicker is used while the robot is stationary, the power cell does not travel with the robot, it travels completely away from the robot.
Under any of the previous years rules, it’s clear to me that using a kicker while stationary would clearly count as controlling a game piece.
Maybe you have a different way to interpret part B here, the fact that I’m interpreting it differently would tend to indicate that it’s less clear than the 2011 and other rules, which is my only point, that these rules are less clear than previous years and I’m confused why they made the language less clear.

Note the red ROBOT on the left side entering the middle of the field. The fuel that it encounters changes its direction and travels with the ROBOT even when the robot changed direction, though it did not maintain its location relative to the robot as can be seen by it moving along the BUMPER slightly before CONTROL (per 2020 rules) and HERDING (per 2011 rules) is lost.

Admittedly the 2020 CONTROL and 2011 HERDING are brief in this example, but I didn’t feel like spending more than 5 minutes on TBA looking for an example.

A ball being pushed by a ROBOT in the same direction that the ROBOT is moving will almost definitely change its location relative to the ROBOT due to the nature of balls being round. The 2020 rules make no mention of how the ball travels with the ROBOT, just that it should travel with the ROBOT in some way for it to qualify as CONTROL.

the power cell does not travel with the robot

While the kicker is in motion and contacting the ball, the ball momentarily moves in the same direction as the robot. As a typical kicker moves, the center of mass of the robot, and likely its geometric center as well, would move towards the ball, and thus the robot would be moving in the direction the ball is propelled.

I expect to see another amendment to G6, clarifying CONTROL. such that if you interact with more than 5 CELLs in what would be considered a strategic manner by a reasonable astute observer, expect to have issues. The way the rule is currently written applying force to a CELL while it is on the ground does not violate G6 since it would be at least partially supported by the floor,so not in violation of (E), not (F) since it is momentary contact, and not (G).

G6.F is a rewrite of herding, and I would say it does not cover off momentary contact. “Kicking” the CELL does not meet the “such that when the ROBOT changes direction requirement” of (F).

Note the red ROBOT on the left side entering the middle of the field. The fuel that it encounters changes its direction and travels with the ROBOT even when the robot changed direction

How would it really be ruled? If you slow it down (or just watch it over), it is clear the fuel was touched 2 different and separate times, not 1 touch. It’s understandable that a ref would not get that extra time to clearly see it was 2 different touches in the midst of competition.

Am I missing something on the updated definition of control? It sounds like a robot can have 5 powercells inside the robot and herd more than that as long as they don’t change direction?

Think about how it would be enforced if this weren’t the case. 5 balls are in your robot, and one that you can’t see is directly in front of you. As you drive past it you contact it which nudges it forward slightly. This would have to be a penalty each and every time if the rule was not worded this way.

@Chris_is_me, that’s why I think the intent language shouldn’t have been removed. In the RAW there isn’t a way to differentiate between the occasional accidental nudge and an intentional nudge or kick