The 2022 driver station includes a panel of 17 LEDs. The LEDs reflect the Cargo status, match status (teleop/auto/clear field), and the quintet status. For more information on how it specifically works, refer to the game manual.

Additional discussion has occurred in the following thread which is a good read:

I’ll break it down. Each individual light has 2 modes: High and Low. (And off, but who’s counting that.) If you score 1 cargo, 1 light will go to High. If you then score a second cargo, the same light goes to Low. third cargo, light 2 goes to High. And so on. There’s 17 lights in the string, with 4 on one end and 3 on the other showing match state. Gives you 10 in the middle. With each having 2 modes, that’s 20 cargo. Does that help?

We created the following site to help understand and visualize the LEDs based on game state:
fms.valor6800.com

A screenshot of the site is as follows: 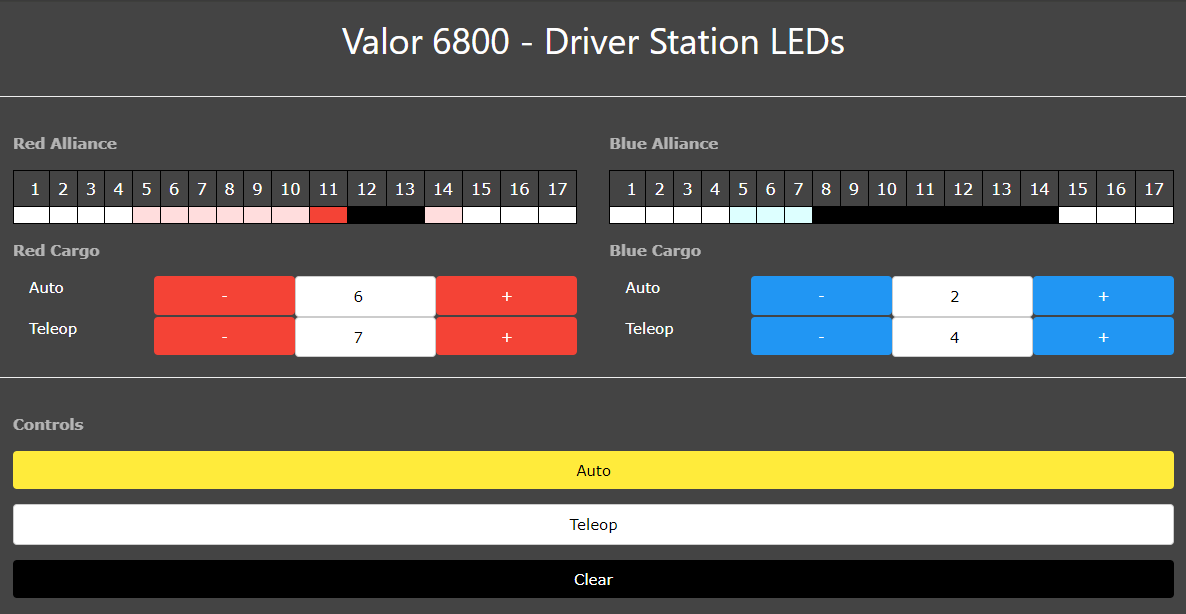 How to use it

Use the buttons to increment/decrement the cargo count for auto and teleop. This will change the table to reflect the score.

Selecting Auto/Teleop/Clear in the Controls section will put the lights in the corresponding match status.

Our version of the site will directly control LEDs in our driver stations via a raspberry pi. The idea would be our technician utilizes the site while we are running practice matches so the drivers get instant, direct feedback in their booth. The architecture is as follows:

If you want the system, let me know. If there is desire for it, we can create some scripts/documentation to deploy the system to your own raspberry pi.