2239 is excited to participate in the Open Alliance this year.

This Fall, we participated in Turtle Trials and had a great time. Thanks @cnepo! We had two teams of 11 members each, the municorns and the llamdas, who teamed up as alliance 2 and won the event! The smaller team size allowed everyone to get hands-on and in depth experience and we will definitely be participating again next year.

Besides Turtle Trials, we’ve been working with the SDS MK4s and we will be deciding whether to use the swerve drive or stick with the KOP drivetrain after kickoff. Look for an update about that on the 8th, if that interests you.

On 2239, each build subteam handles design, manufacturing, wiring, and programming for their major mechanism. Each Tuesday the subteams set new goals and share their progress and roadblocks. This is so that members are not restricted to mechanical, electrical, programming, etc. Rather we want students to jump in where needed and fully understand their major mechanism.

Overall, our team unofficial motto is “Well… it’s better than last year”. It doesn’t need to be immensely better and not everything needs to be better, but we need to keep improving step by step.

The next update will include our team’s goals for the season.

Medtronic has requested that all teams, that they sponsor, create a Equity, Diversity, and Inclusion. This was a great push for us to write down the goals we had been working on and hold ourselves accountable.

Raise $20,000 through our planned events, sponsors, and grant proposals

For kickoff, we were able to go to our local practice field and use the empty field. Team 2129 joined us for the second half of the day and members from 7582 and 4277 joined us online. The hybrid virtual/in-person mix was difficult and I we didn’t give the online team members as good of an experience as I would have liked. Part of that was probably due to following different schedules. Regardless, we were glad to discuss rules with other teams and share strategies.

2 quarters of our team each generated a list of tasks that the robot could complete. These were assigned rough scores for importance and difficulty. This has proved to be a simple way to rank tasks and find differences in assumptions.
Task Lists

The other half of the the team pretended to be robots and acted out a match. After a lengthy field tape layout, they took to the field and performed 6 second rounds. After each round they paused and the audience helped correct them if they moved too far or performed too many actions. This activity is fun, simple, and informative. Team members get a much better idea of the scale of chokepoints and how many cycles they can realistically do. We’ve done this in the past on a basketball court. The tennis team gave us ~150 old tennis balls one year and we use them to represent game pieces. I highly recommend teams try this out for themselves. 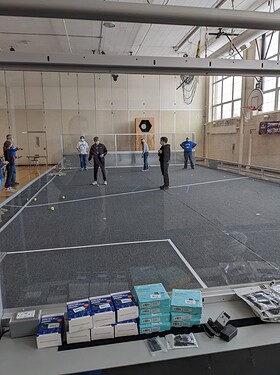 While our strategy isn’t locked down yet, we’re leaning towards tackling the traversal rung, low hub, and score in auto.
Strategy Proposals

We decided to throw together a quick low rung climb to have in our back pocket for later. It took 4 iterations, but was a good energy boost and great to know we have a design to fall back on. 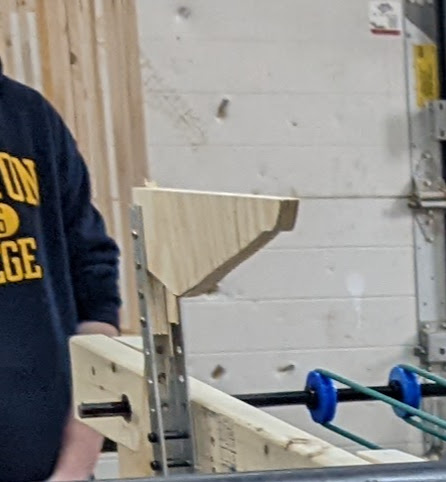 Here is a drawing of the pieces exactly as built. The numbers are not nice because no calculations were done and the iterations were done via observation and changes made by hand. We probably won’t touch this for a while and encourage someone to create a nicer version and post it here. 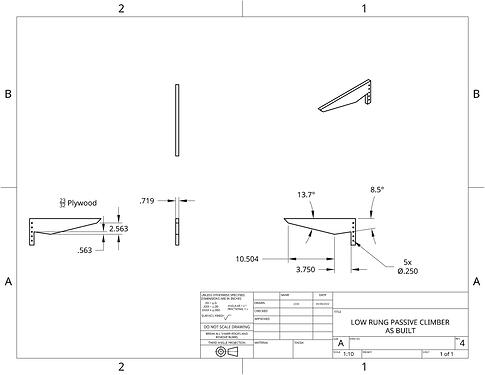 We’ve just started on designs and don’t have much to show here. Today was mostly research and discussion. Discussion was focused on scoring the cargo and the realization was made that it’s hard to evaluate concepts without discussing intake concepts as well.

So much back and forth. Inspiration was taken from Ri3d teams, 2013 robots, a few original ideas, bridge building equipment, and more. Our team has never fully CADed a robot or made a true elevator. So, we were looking for designs that minimize degrees of freedom and don’t require precisely controlled center of mass placement. So far, no perfect solutions. Since there would be so many steps to this operation, we started making comic strips. Each cell shows one motion of the robot. This helped everyone comprehend designs and then point to where clarification was needed or issues existed.
Traversal Rung Ideas

Can you walk me through how you decided to go for the traversal rung and low hub, as opposed to another configuration like bar 1/2 and high hub? I saw the strategy proposals but don’t see how they transferred into a final decision.

I think getting the low bar design down was smart. Something to fall back on and something to help other teams.

I liked the comic strip idea as well. Helpful in communicating sequences.

Our team has never fully CADed a robot or made a true elevator.

This is a bit of a concern for me. The traversal rung is a difficult task, as the dynamics of the entire robot are in question. Definitely something you’re going to want to CAD. How are you planning on addressing this? Leveraging COTS solutions for telescoping arms?

I think for your goals of being on an alliance at your regionals the traversal and low hub are both good choices. IMO a fast low hub bot that scores a significant portion of the 20/18 cargo with 2 of them in auto and a bar 2 hang is sure to be on an alliance. Nevertheless, I am very excited to be following 2239 moving forward!

There is a non-zero chance we switch strategies still. Really though, it comes down to fun and learning. The idea of working on another ground pickup ball launcher didn’t appeal to us that much. That’s what we’ve been doing for the last 2 seasons. Going for the traversal rung was exciting, challenging, and unknown. When comparing the two challenges, we were more energized and motivated to go for the traversal rung. We’ll see if that’s still there at the end of this week.

Definitely something you’re going to want to CAD. How are you planning on addressing this? Leveraging COTS solutions for telescoping arms?

The team is not afraid to use a challenge like the traversal rung to force us to CAD more of the robot. I may have been misleading when I said we’ve never fully CADed a robot, we have completed half of many robots and team members have the skills to do a whole robot.

A COTS solution as a part of the mechanism is almost certain.

IMO a fast low hub bot that scores a significant portion of the 20/18 cargo with 2 of them in auto and a bar 2 hang is sure to be on an alliance.

We think your assessment is true and hope to see many robots at our regionals that can do that.

TLDR: We think the traversal rung + auto + okay low hub is still playoff material in our area and it’s more exciting to us, so that’s the plan for now.

Okay perfect, I have a better understanding now. The traversal rung is definitely a fun challenge and I’m excited to see how you pull it off!

What were the cycle times for humans playing the game?

I don’t have that recorded. We’re going to play again tomorrow and I’ll get back to you

After kickoff we determine what our subteams will be based on our strategy and then members select which subteam they will be on. As I mentioned earlier, our subteams are focused on mechanisms and the subteam handles all design, building, electrical, and programming, so they need a mix of skills. To handle this, we determine our subteam leads via application and then as the strategy comes together they discuss with captains and mentors to determine who will lead which mechanism. Once leads are selected, we run an activity that former mentor/parent Nate taught us.

It took us 4 iterations to be happy, which was about 15-20 minutes. We’ve found this to be very effective in that people are fairly objective and honest, and everyone gets free will and a voice in the process.

Captains are not on a particular subteam to allow them to handle miscellaneous tasks and projects. Mentors are also not specific to a subteam, but tend to stick with one subteam. For mentors, this is to allow an easier time being absent for travel and other responsibilities.

I forgot to record the goals each subteam made. I’ll edit this post and add them later

We were seeing 2-6 cycles in teleop. I feel the activity is less accurate this year since the game pieces remain on the field, so it was harder for us to replicate where pieces would acquired from. We also admitted to our selves that we were all acting as robots that had touch-it own-it intakes. But we also moved slow. We’re going to do it again once the local practice field is built in a couple weeks.

Here is their unfinished update slide for the week. It’s difficult to get after people to document when they’re so interested in learning new math and half a college class in one night. Gold star to the cargo subteam for documenting everything so their missing members can quickly catchup. 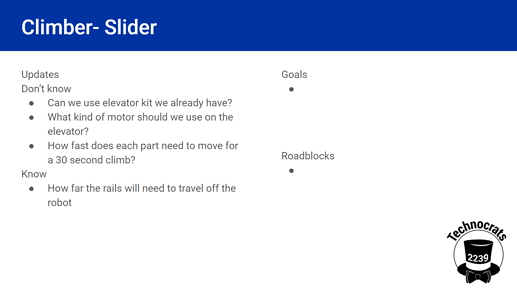 The slider climber team has been working off of this physics simulation that one of our captains put together while they wait for their classes to start up again. That big gray block on the right hand side is to shift the center of mass to make this design work. Feasible, but a non-trivial weight shift.

Based on the lack of substantial rough terrain on the field, we decided to go with the SDS Mk4 swerve drivetrain we’ve been working on over the KOP AM14u4. The consensus is that our swerve is easier to drive than the KOP. We think we can make it even better, so it wasn’t a hard call. We would not have made this decision if our swerve drivetrain was not already better than the KOP for us.

I’ve always struggled clearly explaining what things were good to prototype and what weren’t. There are always prototypes that are made that don’t reveal new information, take way too long to build, or are really a first iteration. Usually this resulted in me repeating “You should be trying to answer a specific question!” over and over again. About 2% of the times I said that, someone got something out of it, so twice a year.

Wednesday night we had an hour long meeting to discuss climbing with leads, captains, and mentors. I felt I was flopping, but the team thought disagreed. 45 minutes into my stumbling about, I had a breakthrough and now we have a new way to organize our week 1 efforts.

Anyway, we now have a 3 step process:

This definitely helped everyone focus their efforts, especially new members who went after one question rather than chasing the general prototype the mechanism

We’ve slowly been collecting various tools from other teams and compiling them into a single document that captures robot details that we need to reference in the future. If you have a good way you’re tracking onshape part numbers and their status (designing, drawing, machining, etc) we’d love to see it.

Shout out to @scubadiv3r for their PDH and Controller pages I believe we also borrowed some sheets from #frc1678, who I think ported the JVN calc to google sheets. 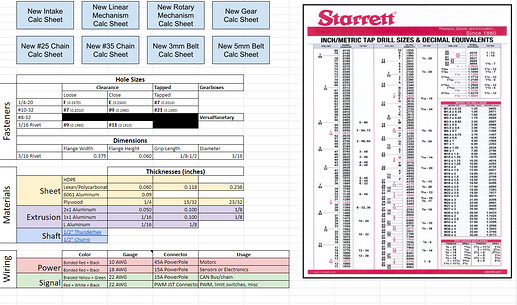