So recently I’ve been fairly bored with a lack of FRC related things to do, as I’m sure many of you are. So after one rather late night of getting lost in a deep web of posts here, I stumbled upon this thread that I hadn’t read through in a few years. This gave me the inspiration to try to see if I could design a cycloid stage for a VP.

After a little research I started modelling up a prototype in SolidWorks. A few failed attempts later (mostly learning to use equation generated curves), I came up with the below model. It utilizes a 4:1 VP gearset (the sun gear and carrier plate), along with a custom made “ring gear” and cycloidal disk. 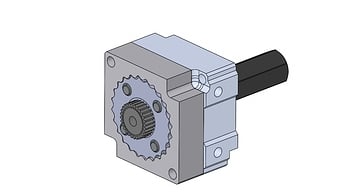 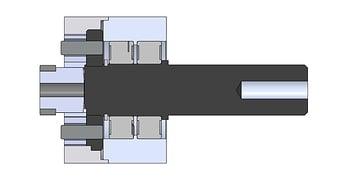 From here I proceeded to print an initial prototype on my Prusa MK2, which turned out fairly well. It only took about 4 attempts for me to get the fit I was looking for between the cycloidal disk and the ring gear. 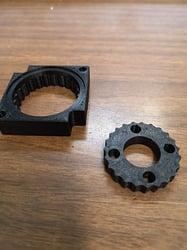 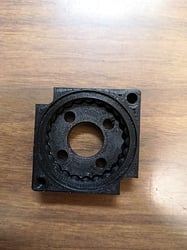 The general motion/principle of the cycloid gearbox appeared to work, so I ordered in a VP to assemble and test. That should be in later today… But me being the impatient/eager person I am, I also decided to begin work on an aluminum ring gear at work today… 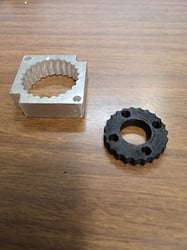 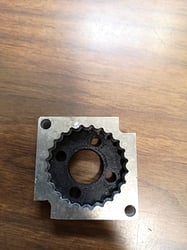 This was cut on our 10kw laser from 1/2" 6061, and should be getting a couple bores put in by the machine shop early next week. Over the weekend I plan to try and assemble the printed version and see where things go from there. I plan to update this thread as I go with my results.

Looks good! Glad to see someone else pursing this, and in aluminum no less! Excited to see what kind of loads you can put on this.
How are you making the camshaft? It will see a lot of shear force so printing may not be enough. Also, consider using 2 180* offset gears instead of just 1 - it will greatly reduce vibration at high speeds.

I can send you a paper that goes into some basic cycloidal force and efficiency analysis tonight.

Great question! So far this is what I’ve come up with a piece of 1/4" aluminum with every other tooth missing that would mate to a VP 4:1 sun gear. This for me solved two issues. First it solved the problem of needing a cam in general, however second, it allows me to easily interface with other VP stages or a motor input. 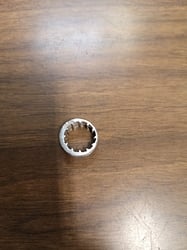 The issue that I foresee though is that friction will be a big factor. I’m concerned that the friction between the plastic cycloidal disk (hopefully nylon in the future, PLA for now) and the aluminum cam will generate too much heat and deform the plastic.

As for a second gear 180° out of phase, I had considered it but was concerned with packaging two gears in such a tight space (trying to keep the form factor of a single VP stage). Figured I would start with the one and get a prototype going first before getting too far down the CAD rabbit hole.

Heat is definitely a big problem. Moving to a metal gear or adding bushings/bearings helps a lot.

You might be able to slip a thin needle bearing between the cam and the plastic disc (although it’d run better on a hard steel cam than on aluminum). Otherwise use lots of grease!

6700 or 6701 bearings fit nicely. Getting short needle bearings is tricky.

Aren’t Cycloidal gears very unbalanced? or is that what the two 180 degree gears are for?

. And if I switch to a 3:1 VP kit, then my sun gear gets bigger, meaning my ID for my bearing gets larger…

Aren’t Cycloidal gears very unbalanced? or is that what the two 180 degree gears are for?

This is an issue indeed. That’s why the suggestion was made for the two gears 180° apart. This would balance out the imbalance (in theory at least).

Just an update from where I left things going into last weekend. My VP came in and I managed to print all of the parts necessary for a prototype. Things were looking great… until it got assembled. Upon spinning the motor, it was apparent that something wasn’t right, as the output of the VP didn’t spin.

Upon further investigation, it would appear that a combination of things are to blame. First being how small everything is, my tolerances need to be tight, and while my 3d printed parts were pretty close, they clearly weren’t close enough. I also suspect that due to my ring and cycloid gear both being plastic, there is a good amount of deformation between the two when put under load. Finally, this being the major factor IMO, the teeth/pins of my ring gear are too small and too many I think. In combination of the teeth, material properties and tolerances (or lack thereof), my prototype failed (that’s my hypothesis at least).

One major point to note, was I realized the 3:1 and 4:1 VP carrier plates are the same, with the pins just being in a different set of holes depending on which ratio you have. So I removed the 4mm pins from my carrier plate and put them into the opposite set of holes. This should give me just enough room to include a 6702 bearing in the center of the cycloid gear for meshing with the cam.

So it’s back to the drawing boards for now. I suspect I won’t have another update for a little while as I am waiting on bearings now from china (I couldn’t bring myself to pay $10-$20 per when I could get them for a 10th the price and just wait for shipping).

Tune your gear to suit how the printer prints. The ring gear probably isn’t the issue. Load in a cycloid is distributed across several teeth at once. Tolerances are probably playing a bigger role than you thought.

You could also use steel pins the way I once did, but for a prototype plastic should be fine.

So it’s back to the drawing boards for now. I suspect I won’t have another update for a little while as I am waiting on bearings now from china (I couldn’t bring myself to pay $10-$20 per when I could get them for a 10th the price and just wait for shipping).

What bearings are you trying to source in particular? For what it’s worth, Amazon has tons of cheap bearing packs (of varying quality, of course) and Fast Eddy Bearing specifically has 10-packs of 6702’s in stock for $10.00.

My issue is the shipping costs to Canada. Amazon.ca had the bearings for $20 (10 pack) which while not bad, I could get the same 10 bearings for $8 from china. At the same time I was ordering some 6805’s too, so in total it was $40 for the two sets of bearings through amazon, or about $18 from china. Considering I really only need 3 bearings total of the 20 I’m getting, I couldn’t bring myself to spend $40 on just 3 bearings for a side project.