You can do it directly in CAD with a path length dimension. The easier way is to just use a C-C distance calculator like the one in my design spreadsheet. 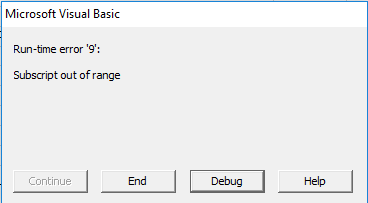 In my experience, path length with arc pitch diameters, especially with large sprockets, will give an inaccurate spacing, generally shorter than what is needed. This is because of the segmented nature of chain. In other words, chain straight segments end on the pitch diameters but are truly cords on the pitch circle of specified length. For more accurate C-C calculations you can use the equations/calculators online (my go-to), or if you’re feeling particularly bored you can draw it out like I did below (I do not recommend). 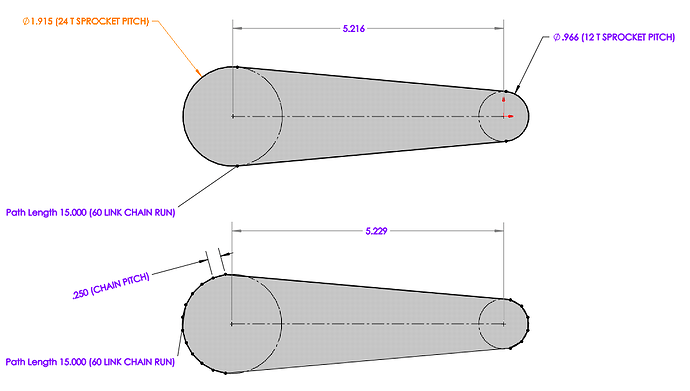 In all honesty, with the relatively short runs of chain involved in FRC, the tendency for chain to stretch over time, and the flexure of small aluminum shafts it isn’t too critical in this application, but when you start your career and move into larger and longer-lasting equipment you want to make sure you are using the correct spacing.

Edit: Apologies for the derailment.

I’ve spent a good amount of time developing a C-C formula for my calculator, and I started with “steal from the best, invent the rest.” Developing a formula to give you the path length* from the C-C distance isn’t so hard. Deriving the inverse formula is near impossible, even with Wolfram Mathematica working on it. Pretty much everything else I saw online used either an iterative solution or a linearized approximation. I “borrowed” the iterative solution from @Clem1640’s chain/belt calculator as the back-end for my calculator. I’ve been using that formula for a number of years now, and it’s yet to fail me. Whether it’s exactly right or not I can’t say for sure, but it’s always been close enough for me.


* The approximation, without the individual links like you described

If I’m understanding you correctly, you are interested in a formula that determines the C-C distance from the path length of an arc approximation. The iterative approach works perfectly fine and is definitely robust. I’m sure someone smarter and with more drive than me could use knowledge of the difference in length between the arcs and the cords in conjunction with the number of cords that wrap around the pitch circles, but I personally don’t see the need when the above iterative approaches converges on the same values.

What I find interesting is that at a micro scale the ideal C-C distance changes depending on where in the link the transfer from cordial to linear is occurring. In other words, the C-C distance when a link’s pin is just contacting the sprocket and when it is halfway between that pin and the following one are different.

I was just trying to say that the iterative method seems to work fine in my experience, and that’s based on the path length of arc estimation. While I’m sure you’re right about the exact distance being a bit off because of the individual chain links, it doesn’t seem like a significant difference. That especially if the the exact distance changes as the chain rotates around the sprockets.

Do you have a side view of the climber leg when it’s stowed away? I have no idea what an overcenter linkage is and how it stops the load of the robot from being pressed onto the cylinder.

A before and after picture or an explanation would be amazing, thanks!

I was curious how 254 has attached their bumpers to their robot in 2018 and 2019, as there haven’t been visible bumper brackets in their technical binder since 2017. I sent an email, also asking about frame welding/bracketing, and @Torrance kindly got back to me with this, which he has approved of me sharing here. I’ve included my own messages to add context (basically the images) to the answer. All credit to @Torrance and 254.

We’re looking to revamp our drive frame design, and 254 has been a huge inspiration. I have two questions about 254’s frame and bumpers, and it would help us out a lot if you could satisfy my curiosity.

What appears to be a plate welded on top of the machined 2x1 upright:

A plate that appears to be welded to the drive rail to protect the wheel:

How did you make sure these kinds of pieces were aligned to a tight enough tolerance, if at all? 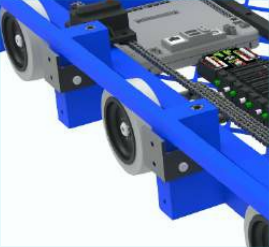 These seem like their outside face could be secured to bumper wood, and then the whole thing secured to the uprights via a clevis/clotter pin or similar. Is that right? Similar, but more traditionally shaped brackets appeared in 2016. This is roughly the method we use now, with welded nuts on the bottom of the bumper rail.

In 2018 and 2019, these were gone from the binder screenshots, seemingly replaced by a set of small and large holes at various locations around the frame. For example… 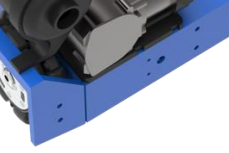 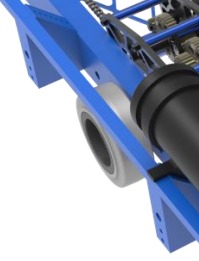 The large ones appear to be through holes: 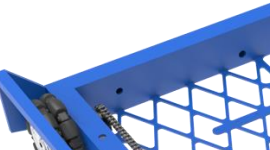 I would love to know how you guys have mounted your bumpers these last two years, and if those hole patterns play a role. If they don’t, what are they for?

Nice email, I appreciate you did some research before just asking a super open ended question like “explain your bumper and frame for the past 5 years”. […]

Welding your drivebase is helpful, but not required. It’s main advantage is improving the stiffness for minimal weight (don’t need to add gussets/brackets everywhere). [Local welder] is a great welder and the extra 2 day turnaround is worth it in our opinion.

Thank you for the quick and detailed response! […]

If you don’t mind, I’d like to clarify the few things I found a little unclear with some Paint-style diagrams. Just let me know a correct/incorrect for each, if that’s not revealing too much.

My first thought on securing these would be a tapped “Pull-Out Dowel Pin” with washers on either side of the wood, like so (not to scale): 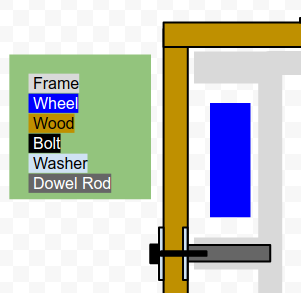 where the inner washer sits in a shallow counterbore. But, I feel like there’s a better way of doing this that I’m missing.

Then for the thumb screws (thanks for the link!), I picture this:

And the thumb screw explains the large through-holes in the drive rails that I was wondering about.

The large plates on the corners of the frame in 2018-2019 were held relative to the nearby 2x1 frame rail with a lasercut 1/4" gusset (it was shaped like a horseshoe to allow welding access to the junction between the 1/4" plate and the tube.

From horseshoe, I’m thinking of something shaped like this (but rounder, forgive my paint skills): 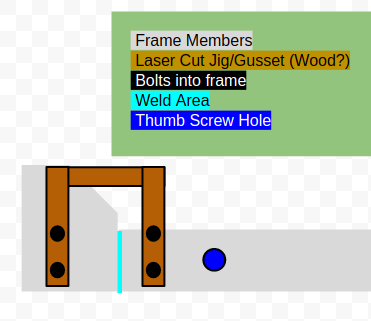 the holes from which roughly correspond to this CAD image from 2019: 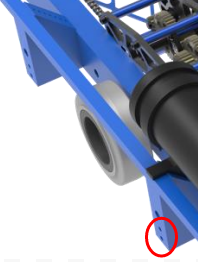 were part of a jig/gusset for the uprights?

The 3/8" pins didn’t really need washers but they’d certainly help spread the stress and not damage the wood.

The thumb screw plate looks good, we ended up doing locknuts on the backside of the plate instead of tapped holes because we were tapping those steel plates by hand and that stunk, so thru-clearance holes was easier to make. Note that having locknuts hitting the pool noodles we’ve found to be totally fine, pool noodles just compress a tiny bit locally where locknuts or other small fasteners are.

For the 2x1 uprights, those were jigged using short screws and locknuts through the 2x1 frame tube into the upright bumper 2x1s (you might be able to spot these access holes on the inward side of the frame 2x1).

A big thanks to @Torrance and 254 for sharing!

The level of effort that went into this post might be the most impressive thing I’ve seen on chief.

So I just watched 254’s off-season recap and I was wondering what the piece of foam was that was attached to the frame. What purpose did it serve (if any)? 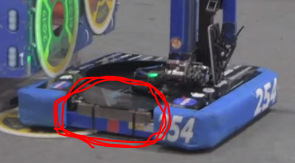 Not foam, it’s a weight. Unsure what material.

That would be moving quite a lot and it seems un-254 to ziptie a weight down.

If it is a weight, I’m curious as to what the mass of the weigh is.

It is a weight. I don’t know the mass.

IIRC they had it on at worlds and it was to keep the drivetrain from rocking/becoming unstable due to movement of the elevator and arm. My guess is it is something dense like steel to make any significant difference to the center of mass. Someone from 254 can answer these questions for sure.

Those are steel bars, like 1” x 2” by 8-12” long in various locations. They are both VHBd onto the top of the frame rail and ziptied to secure them. We added them to the drivebase to increase the mass and lower the CG when the arm inverted, allowing for snappier and more aggressive driving through defense.

We’ve found that even though the lower CG wasn’t needed to not tip over, having the robot “feel more grounded” to the floor gave the driver more confidence in the robot, and thus they pushed it harder and got better performance. Side note, this concept of giving the driver confidence is why we’ve tried to have intakes that stow with the game element inside the bumpers. Compare how aggressively 2018 was driven versus the precarious gear on the back of the 2017 robot.

All in all, we probably added about 20lbs of steel bars to base for the 2019 comp bot. We tried to place it locations that would lower the CG, be out of the way of the turret, and not increase the robot’s torque for climbing that much (i.e. put mass on the side with the batteries that is nearer the climber’s pivot foot).

We also added steel to the swerve drivetrain, although couldn’t do as much since the swerve weighed more than the comp bot’s WCD (although we did save a little of weight with the removal of the turret gearbox and its motor on the offseason Swerve).

Thanks, I never would’ve expected zip ties and vhb to be strong to hold steel bars in place with aggressive driving but that’s good to know.