Do you grease your gears? If so, is anything there so the grease isn’t thrown everywhere?

They use bearing blocks I think

We use a black grease from McMaster that is pretty sticky, not usual grease you’d use for sealed gearboxes. We also don’t overgrease the gearboxes, just a light coating and let it run in. It doesn’t really get everywhere and if so it’d only be initially and then we wipe everything down.

@Torrance Thanks for all this info. I know and appreciate the reason that 254 does not release CAD so this mini QA has given a lot of insight into why things were done.

Could I see a layout for how you positioned your gears in your arm, it’s hard to tell from pictures due to wires and lexan in the way

The gearbox in the carriage drives the arm’s shoulder and wrist, each powered by a 775pro. The motors drive 3D printed (Markforged) pulleys which drive a series of 14T and 38T gears on 3/8" or 1/2" thunderhex.

12T sprockets drive #35 chain to 36T sprockets for shoulder and wrist joints. SRX Mag Encoders measure relative angular position of wrist and arm. Shoulder pivot is a 1/2" thunderhex dead-axle held in a large billet yoke. The wrist #35 sprocket is bolted to the 36T #25 sprocket, which drives a corresponding sprocket on the wrist pivot that is bolted to the wrist plates. An inline #25 chain tensioner exists to minimize backlash on this run.

The entire gearbox is mounted via slots in the tubes and tapped holes in the plates that allow it to pushed away from the shoulder pivot by WCP Cams, tensioning the #35 Chain.

775connects reorient connectors and allow the motors to be swapped out quickly in case they burn up (which happened quite a bit at SFR/SVR due to heavier intake as discussed above).

Gas springs (130lb for arm and 40lb for wrist) counterbalance via billet pieces that bolt onto the Versakey pattern of the #35 sprockets.

The small pancake cylinder at the bottom actuates hooks that pull the suction climber carriage down with this main carriage (same hook pulled down the Stinger at SFR/SVR). 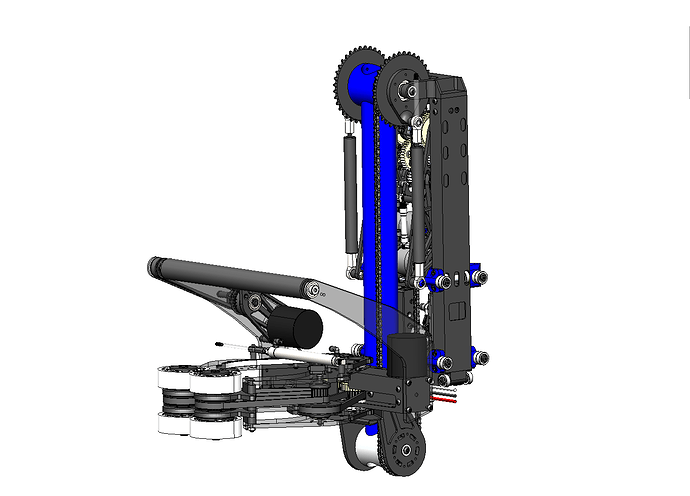 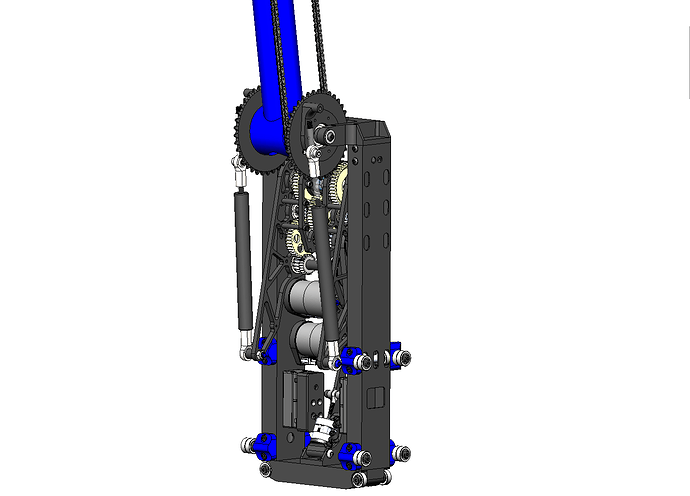 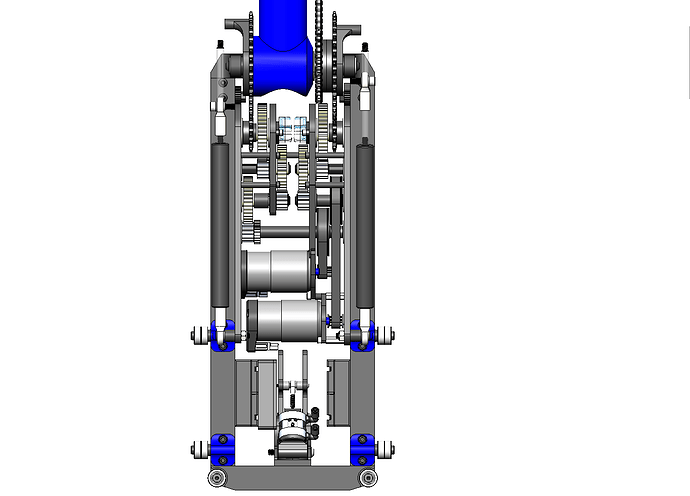 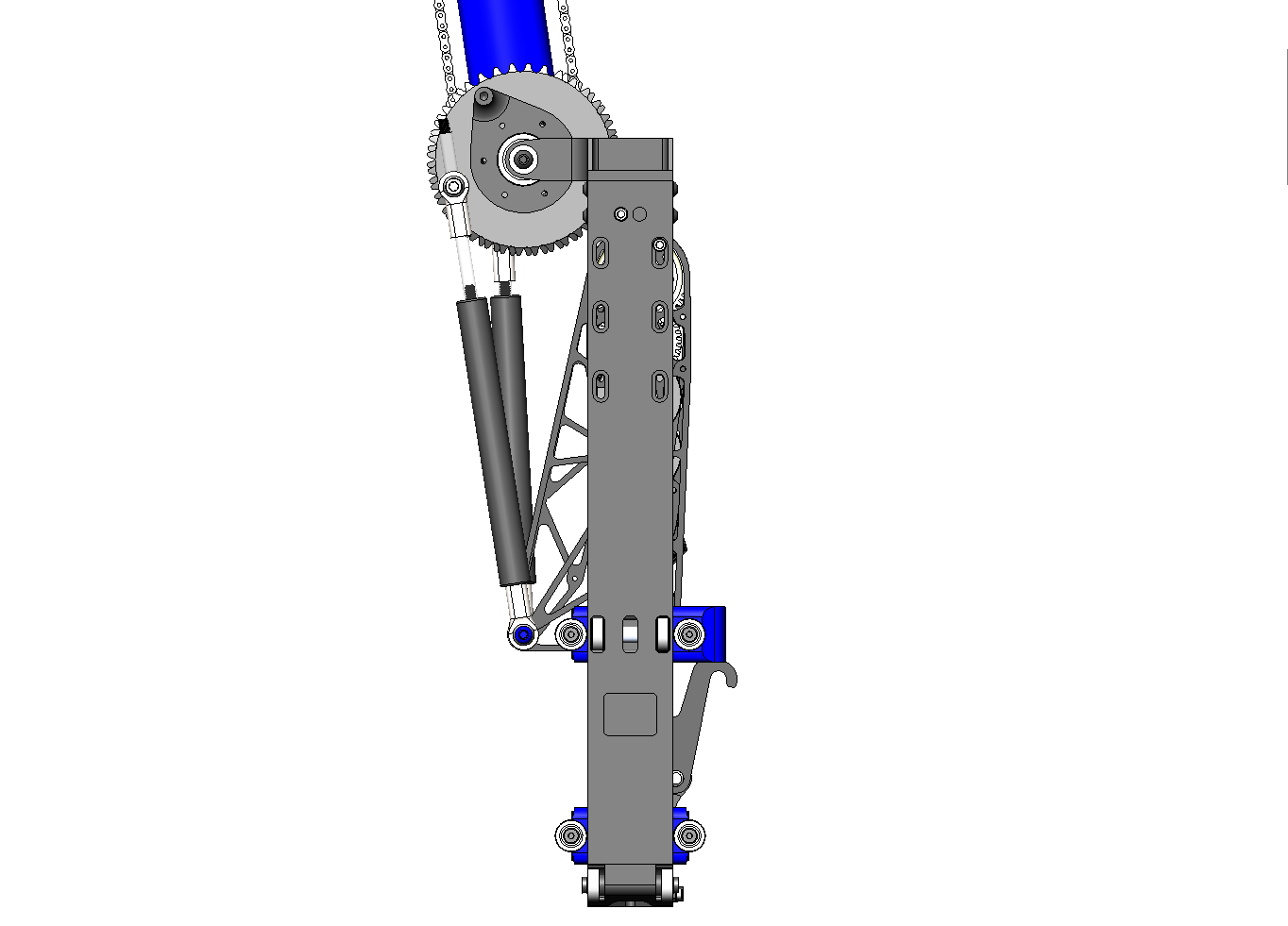 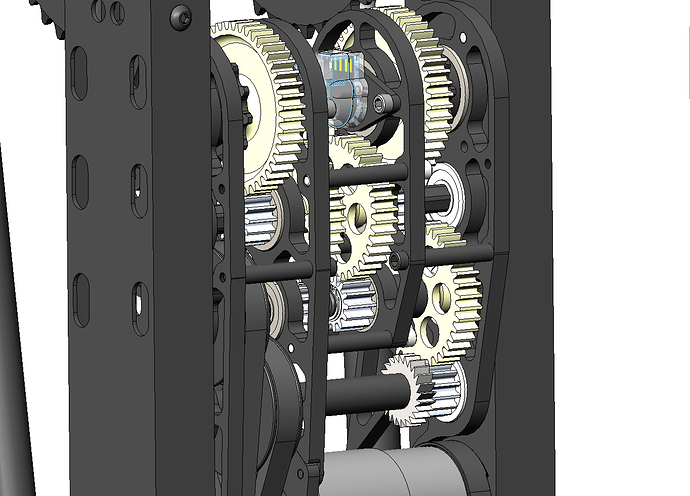 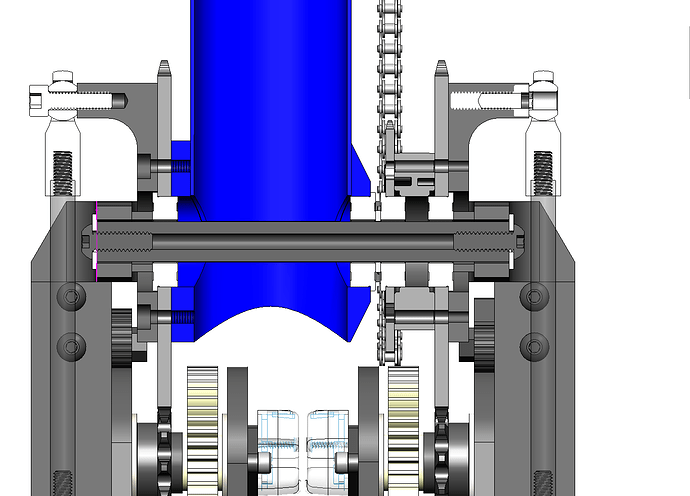 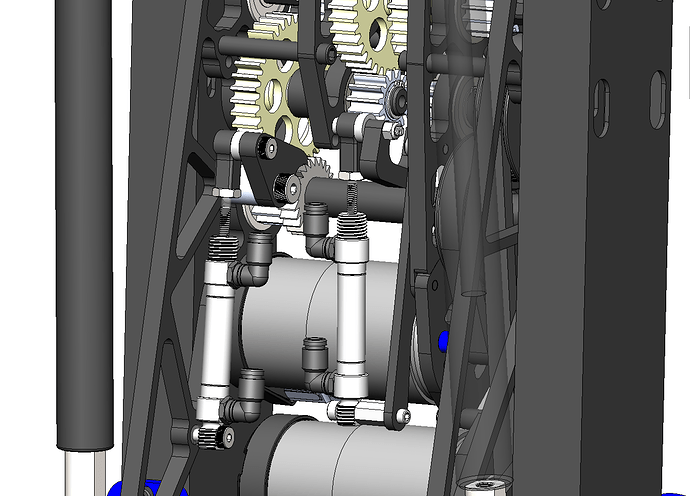 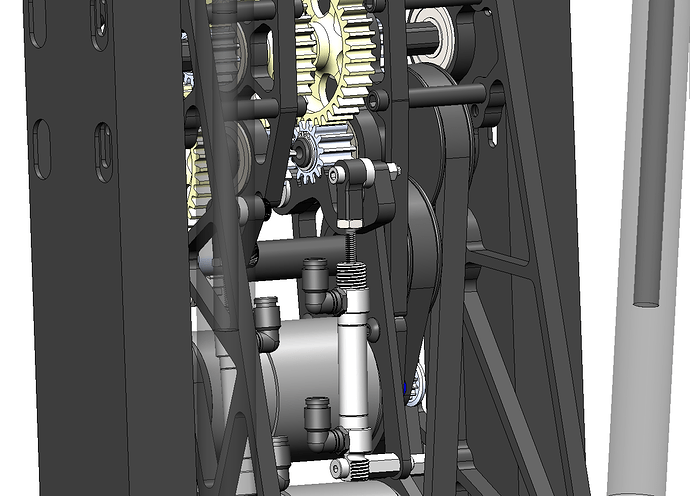 A belt would probably also work, but using chain let us use a COTS 72T Sprocket at a starting point, we wouldn’t have to mill our own pulley (the largest pulley VEX sells in HTD 5mm is only 60T, requiring more reduction out of the turret gearbox).

The chain is also thinner, width-wise, than a belt and its pulley. Using chain let us reduce the height of the turret (allowing the elevator to come lower, helping with climbing and intaking/scoring level 1 discs.

I loved watching your robot at worlds! I just had a quick question: how did you decide on a suction climb?

They didn’t have a suction climb until worlds. They probably just had a design priority going into to worlds that they wanted to be able to climb with another robot already on the hab, and a suction climb was the best solution.

@Torrance do you mind sharing the cad photos of drive train 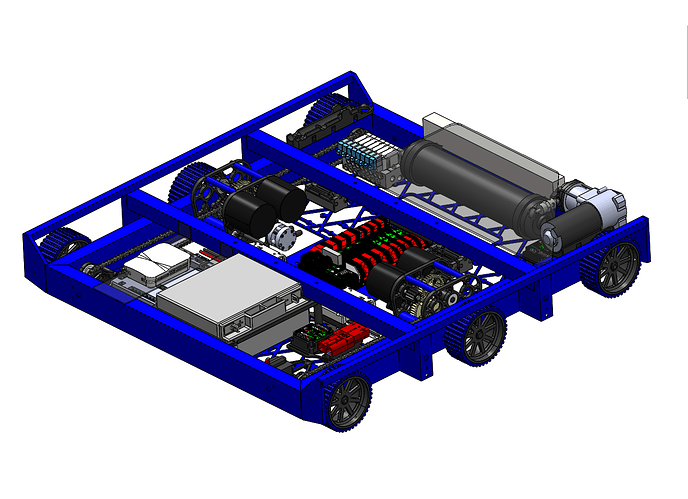 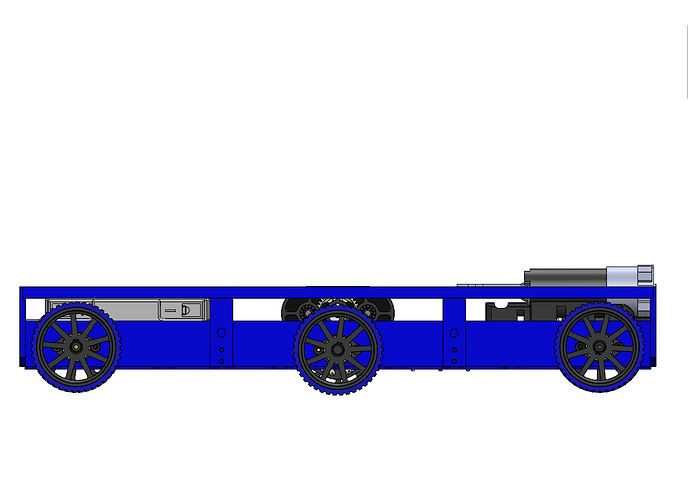 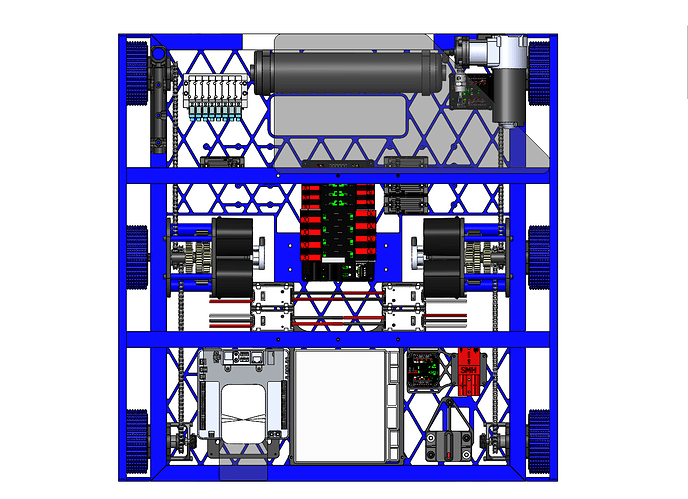 How did the team like having the speed controllers closer to their relative motors instead of all being centralized? Additionally, what size surgical tubing do you use for your style of intake roller? Do you just roll this onto the tube or is their some special trick to it?

I really appreciate your willingness to explain so much about the robot. I unfortunately didn’t get to see it in person this year and this might be one of the coolest robots in recent history. The technical binders are great, but getting a more thorough explanation of everything is like Christmas in April. Thanks!

We buy wider sheets and cut them to width on the vertical bandsaw (table saw might also work).

The placement of motor controllers was largely driven by the need to run wires between encoders on the arm, the cannifier(s), and the Talon SRXs. Putting the Talons in the carriage minimzed the amount of long wire runs going through the turret and elevator IGUS. The intake also had the SPARKs at the end for a similar reason, didn’t want to run the 3 larger wires that go from motor to controller all the way down.

The intake has 1" ID, 1/8" wall surgical tubing stretched over a 1" OD, 1/16" wall tube aluminum tube. The stretching is tricky and aided by blowing compressed air between the roller and tubing. I think 1678 shot a How To video on this technique somewhere.

The stretching is tricky and aided by blowing compressed air between the roller and tubing. I think 1678 shot a How To video on this technique somewhere.

What kind of vacuum pump and check valve do you guys use for the suction climb? Do you also have a pressure transducer to know when it’s okay to climb? What’s the material that produces the seal around the actual plate itself?

I’m wondering what did you use to print those pulleys? Carbon fiber or PC or metal?

Could you explain a little about how you designed your suction climber? It looks like a flat plate with a gasket sorta thing that you then vacuum the air out of?

Do you have any tips on how to do this with a hollow roller? We were able to do it before but it was quite difficult.