We switched to a 2D representation of the power port today for the Power Port challenge, and we went from 5 cycles to 7 cycles and were much more accurate with inner port shots. Our shooter puts backspin on the power cells so they pretty much fall straight down. Can recommend for teams that may not have the resources or time to build a funneling system to help the human players.

At what frequency/spacing are you shooting your balls? Even if balls bounce straight down, I worry if there isn’t much distance between them, they’ll still hit each other in the air.

I would say we shoot off all 3 balls in less then a second. Granted, our shooter puts a lot of backspin on the balls, so they get out of the way pretty quickly.

If the balls hitting each other did become a problem, we were also considering shooting at the power port at an angle so the balls don’t bounce directly back at the bot. 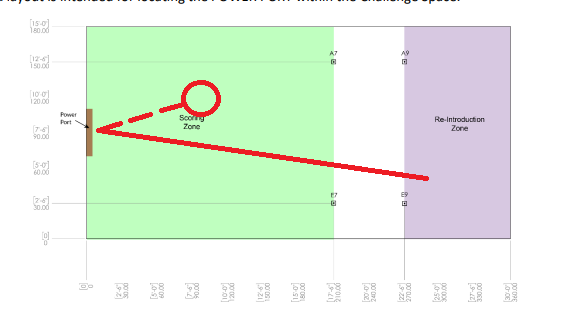 We did about 15 or so attempts today and we only ran into the problem on maybe 1 or 2 runs. Although, it’s probably very dependent on your shooter and whether or not it has enough backspin to kill the momentum of the balls.

We use a 2d goal were able to get 7 cycles. We used two human players. We shot at an angle and the balls bounced back very nicely. Human player closest to the goal would let the first ball go past him to the other human player waiting in the reload zone and then snag the 2nd and 3rd balls and quickly get them back to the reload zone. The shots are spaced out enough that we didn’t have an issue with the balls hitting each other.

So, let me get this straight, you are bouncing the PCs back to the human players who re-introduce the PCs to the robot in the re-introduction zone. You are not collecting them from the floor with the robot’s own intake?

I was expecting that the advantage of the 2D port would be that the balls would be on the field and the robot would just intake them rather than driving back to the re-introduction zone. But, I can see that bouncing them back to the human players would (could) be more efficient and repeatable than collecting them with a funnel system and then tossing them back. I just was not thinking that would be the main reason to use the 2D power port.

So, let me get this straight, you are bouncing the PCs back to the human players who re-introduce the PCs to the robot in the re-introduction zone. You are not collecting them from the floor with the robot’s own intake?

So in this case they’re bouncing off the outer port, not going through the inner port right? I’d argue getting inner port is more beneficial, even if you get a cycle less, because of the extra points.

You can still hit the inner port on a 2d power port.

but on 2d isn’t the inner port supposed to be a hole? If it goes through the hole it’s not bouncing back into the reintroduction zone 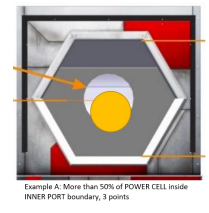 imagine you attached a big piece of plywood onto your power port where the big hexagon was and drew the hexagon and circle onto it. thats the 2d representation

The one they used in the kickoff video was a 2d hexagon with a hole cut out for the inner port, so I was under the impression that was what they meant by “2d representation”. The rules are a bit fuzzy about it though, so I could be mistaken.

The one they used in the kickoff video

Back in Ye Olden Dayz when there was this spotlight feature, one of mine that was nominated was something to the effect of “I don’t care what Dean, Dave, and Woodie say at kickoff: If it isn’t in the rules, it isn’t in the rules.” (IIRC, in reference to someone commenting about the drive coach having to be a mentor, or something along those lines, and saying that one of those three said it.)

Basically, whatever they show at Kickoff that isn’t actually either 1) part of the field) or 2) in the Manual in some way, shape, or form loses out to the Game Manual as far as whether it’s valid or not. (Or, to put it another way: Any conflict with the Game Manual is solved by the Game Manual winning. It may win by being updated, but it still wins.)

Is anyone using the 2D power port to allow the PCs to land in the shooting zone and then using the robot’s intake to scoop them up? In 2020, there were a lot of robots with pretty decent intakes that could probably collect 3 balls from the floor faster than it would take to drive back to the re-introduction zone and get loaded by human players. I would think that for robots with good intakes and decent drivers, this could result in faster cycle times than using the human players.

It is not clear to me whether the rules disallow a funnel mechanism attached to a 3D power port that would drop the balls back on the field right next to the power port (if the robot still has to drive over to that area to collect the balls, then it does not seem to qualify as an “attempt to create a ‘loop’ with minimal ROBOT movement”). But if you use a 2D power port, it would be expected that the balls would end up back on the field, so certainly in that case, collecting the balls from the field would be expected. So, if you feel your robot can collect the balls faster than the human players can cycle them back to the re-introduction zone and then feed them to the robot, then using the 2D powerport would be a great way to improve your cycle time.

We have used ours for a few that got away from the human player, but with needing to re-enter the Power Cell into the reintroduction zone anyway to be able to score it the benefit is negligible to non-existent.

From the blue box under PPC6:

If the balls are laying on the field in the shooting zone, you can pick them up.

I agree that for the accuracy challenge, you would need to get the PCs back to the re-introduction zone. But not for the powerport challenge where the cycle time is more important.

Be careful with the rules here. If a ball is scored and the robot picks it up, the robot has to take the ball back to the re-introduction zone before it can be scored again. I think rule 2.4.10.3 discusses this: “A POWER CELL is only considered scored if, as it scores, it is not in contact with a ROBOT and that POWER CELL has entered the Re-introduction Zone (via ROBOT, by human, or by rolling itself) since the last time that POWER CELL was scored.”

Autom8it has it correct here. They pretty much do not want you creating a feedback loop where the robot doesn’t have to move. And as such, they require every ball to go from Goal -> Re-introduction Zone -> Goal -> Reintroduction Zone. It can go there while it’s inside a robot though.

Thanks for pointing that out. Another example of why it is important to keep your manual up to date with all the latest updates and Q&A.