Like most of you, we spent kickoff weekend talking about strategy. We made a list of what our team’s priorities are and how we think this game is going to be played.

We think there’s going to be a lot of emphasis on cycle times this year. And this section of the field is going to get quite tight as teams travel between the loading station and the community Our plan is to focus on collecting from the double substation where we know the game pieces will always be in the same position and orientation. Because we can choose where game pieces begin the match, we want our primary auto to focus on manipulating the cubes(we don’t plan to touch the cones in auto) we’re also looking at ending the autonomous period engaged with the charge station. (one of a few very rough plans pictured below) Three stage elevator (powered up and down) mounted at 35⁰ allowing us to place either game piece in any of the grid locations.[see below(or CAD)]

(still theoretical) capable of manipulating cones and cubes attached to a wrist attached to the carriage of the elevator. Prototyping teams are currently working on creating claw prototypes that can effectively manipulate both cubes and cones. Code team is creating paths, and just finished getting the gametools and WPILib installed on the driver’s and code’s computers. Next up code will begin the process of IDing motors.

Like always, team 319 is planning to continuously improve our machine through the course of the season. But our goals for the first event are to have a robot that can effectively maneuver the playing field, score in all three rows of the grids, manipulate both game pieces, collect game pieces from the portal of the double substation, make at least 5 cycles(conservative estimate), and dock and engage with the charge station. We’d love it if we could do more than that by the time our first event (NE District Rhode Island) rolls around, but that is our goal.

Over the past week, team 319 has been working on setting up field element replicas, and have put together a number of potential designs for collectors (check CAD for most current iterations). We began to make high fidelity prototypes of some roller based collector designs in order to get a sense of geometry that we’ll need later down the road. We began teaching our new members about the workshop, the tools, and safety. On Sunday, the first couple parts of our drivetrain were made. On the code side, we began to focus on getting our offseason project drivetrain functional so we can begin testing autos. In design we did lots of work in the CAD model and talked about needs for the robot especially regarding what we want our drivetrain to be capable of speed wise.

This post will be a bit of an information dump so in the future our plan is to split it into multiple posts throughout the week rather than all in one post. We are also looking for any and all feedback on anything posted below. Also if there are any questions we are more than willing to answer.

#SlantedElevatorGang
Are you all planning to forego ground pickup entirely and solely focus on feeder station? And if not what your plans for getting game pieces into the robot? Fantastic work! Thank you for this resource!

One of our biggest goals with this robot is to continuously improve it no matter what week it is. Our focus right now is to do the things highlighted in green in the strategy tab at our first event and go from there, but as you can also see we drew the line just above ground pick up so hypothetically that is the next thing we would look at. Also it’s worth mentioning that the robot above should be able to handle cubes off the floor.

This does not mean that we haven’t thought about cones off the floor though. When thinking about it for this bot I think some sort of handoff mechanism off the front of the robot would work best 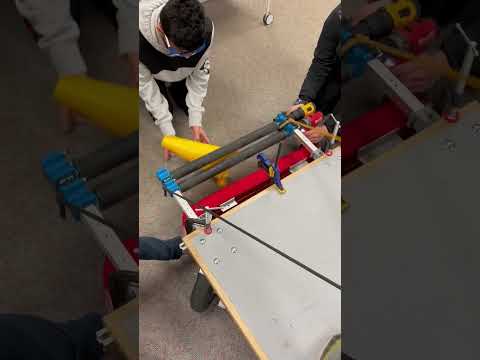 I really like this prototype 6328 posted on their thread

The image above is the current design for our wrist. It utilizes a few of the rev ion products which we haven’t had the chance to mess around with yet. Looking for any comments on successes or failures when using the rev spline shaft as a live shaft. Thanks in advance!

Since our last update, team 319 has begun manufacturing our robot. After running into some early issues in manufacturing, we’ve been working to get our machines up and running. We have made a number of design changes in our CAD. That’s all for now, more updates to come soon. As stated previously if you have any questions about our processes or design we are more than happy to elaborate and even more than that we would love to hear any feedback you may have!

Since our last update, team 319 has been primarily working on manufacturing our robot, but we've also worked on autonomous pathing with our off season drivetrain and have made developments on our scouting app.

That’s all we’ve got for now, more updates coming soon. As before, if you have any questions about anything, we are more than happy to elaborate and we would love to hear any feedback you may have!

Update coming soon but in the meantime… 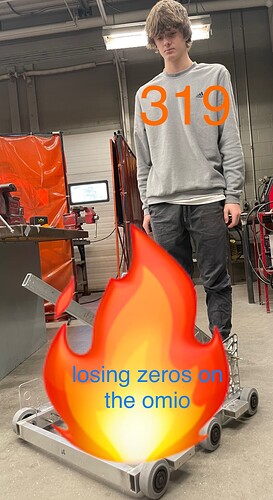