Today the rookie team 1089 held their first fundraiser- a Rakeathon. Fifteen yards and a ton of leaves later they were $320 richer. Still got thousands to go though…

Anybody got a sponsor in central NJ looking for a team? 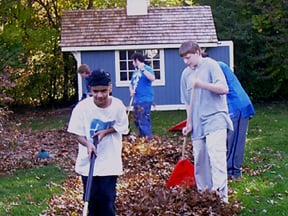 You could expand that to snow removal later in the year.

We have expanded this tactic into doing all sorts of yard work. We mulch, edge, we weed, we paint, we dethatch, etc. Funny thing is the only thing we don’t do is rake. This work can get you a nice sum of money if you do a good job. We have gotten 5-10 students every weekend for the last 3 weeks and gone out and I think we’ve made around $1000. The other plus for this work is it’s a good team building excersize…

By the way, dethatching is some hard work…if I can find the picture of our work last year, I will put it up.

That’s great you guys are out there fundraising. We no longer have our NASA grant, our school cut our funds by $500 and we want to attend 2 regionals. So, we made $620 the hard way by having a car wash. We still have a long ways to go though…

The students on 1089 raked yards, washed cars in the cold, sold merchandise and generally busted a gut and were able to raise about $1500 towards their registration. But that obviously wasn’t enough and as the December payment deadline came upon them things looked bleak.
While the kids were busy doing what they could, several parents essentially made finding the team a sponsor a full time committment and over 40 companies were approached. Most were disinterested, a few offered small donations and several are considering engineering help. Finally, in the 12th hour, with the help of the Hopewell Valley team, Bristol Myers Squibb offered the registration money. Team 1089 will get to play! Now all they need is some local engineers.

Thanks to BMS for again coming through for the NJ FIRST teams, to Mrs. Klotsky for all her hard work, FIRST for being flexible when they needed it, and to the Hopewell Valley Bullbots for helping out our friends at 1089.

Team 1089 is off to a great start with a lot of friends behind them. They train with the Edubot this weekend. Watch out for them at Rutgers this April.

being in Sunny Florida we do Car Washes…a lot of cars…hey we even did a triple strected limo…it was great! What you do is sell tickets before hand…you honor them if they bring it, if they forget it…charge 'em again, and if they don’t come, hey you have their money and did no work.

Sadly the snow removal thing never happened, but we’re really excited about the progress we’re making so far. This is very overwhelming for a lot of us, but we’re taking it step by step. Thanks to Wayne C. from team 25, as well as the support from others, we’ve come to realize that being a rookie team doesn’t make you a team bound for failure.

Thanks to everyone for support, and hope to see you at Rutgers!