The ALChemists are excited to be joining the #openalliance in 2023! We are joining to keep a log of all the ideas and models we are currently working on and a blog of all our adventures in the fantastic world of FIRST Robotics!

History
The ALChemists were founded as the Golden Eaglebots at Maple Mountain High School in 2010. They won the Utah Regional their rookie year and competed at the FRC Nationals in Atlanta that same year. The team moved locations to the Advanced Learning Center in 2016 and adopted the name “ALChemists.” The team has competed yearly since 2010 (except for 2016) and is excited to be competing alongside all of you in 2023!

The ALChemists were excited to join in the global excitement over the release of a new FRC game concept this past Saturday. Per team tradition, the ALChemists were treated to a wonderful pancake breakfast while eagerly counting down the minutes to Kickoff. After the game had been revealed, team Mentors and Coaches met with the parents to discuss the agenda for this season. Because we have a shorter build season than in previous years (Utah Regional, Week 1), it was crucial to establish a more defined schedule to meet our deadlines. Last year, the team struggled to make it to our local event on time and arrived late on Check-In day. We have prioritized completing all necessary parts of the bot by February 11, as outlined by our team’s Gantt Chart (more on that later). This will allow a grace period of approximately three weeks to make adjustments or revisions to the robot. In addition, this period will also allow us to dedicate time to training a Drive Team and Scout Team for competition.

The Engineering group primarily discussed how to design a device that would pick up cones and cubes. We felt an arm mechanism would allow us more flexibility to pick up and maneuver cones, particularly to the middle and upper nodes of the grid. Our team liked the idea of designing a hybrid device that could pick up a cone (in nearly any orientation) or cubes, so we designed a prototype device that we hope to improve upon in future iterations.

Our first design consisted of a 2x1 grid of inversed tennis ball halves on wooden dowels attached to a wooden board. Our hope with this iteration was to create a gripping device that could be adjusted with pneumatics to pick up the desired game piece. A shortcoming we quickly noticed with this version was that to move a cone into an upright position, we would have to flex the gripping device multiple times so that it would slowly fall into the correct position in between the tennis balls. This could cost valuable time on the playing field and was a component we immediately sought to improve upon.

Video of the Arm (v1.0) in action: YouTube Video 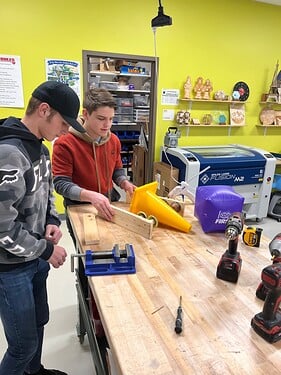 The second iteration of our intake arm was much like the first. However, we replaced the wooden dowels holding the inverted tennis balls with a stack of ball bearings and threaded a screw through the whole stack to hold the tennis ball in place. Adding the bearings would prevent the Drive Team from flexing the grabbing device multiple times to bring the cone into an upright position. This left the job of righting the cone entirely to gravity, which we found worked much faster (and more reliably) than our previous iteration. We also tested grabbing the cone from a variety of positions, including on its side (facing to the left or right), on its side (facing away from or towards the arm), right side up, and upside down (leaning against a wall or sloped surface). In each instance, the cone successfully navigated to an upwards position without any force or influence from the user. 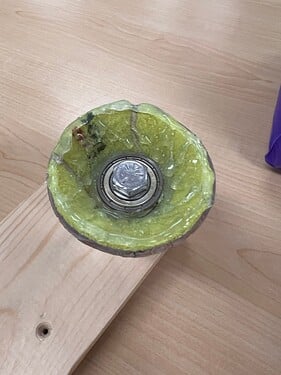 Our team has routinely used the West Coast Drive in our competition robots in the last few years. The two-speed gearbox allows us to move quickly across the field in high gear and also provides precision and lots of defensive power in low gear. We have decided to use this drive layout again this year because we have become so familiar with the system that we can produce effective results in a shorter time period. We toyed with the idea of implementing a Swerve Drive, but did not feel we had the time or funds to learn a new system in time for the competition. This week, the Engineering team conducted a Dimensional Analysis of our planned intake arm to draw the final design for our Drivetrain, which we plan to fully machine and build by next week’s meeting.

This week, the Programming team spent a great deal of time updating all the software applications to their respective 2023 versions. When not updating software, they worked on updating and simplifying our website, which has needed some organization for a few years. They also began researching and building an Autonomous Balancing Method using a CTRE Pigeon 2.0.

A team of rogue Engineers also joined the Programming team in building a wooden replica of the Charge Station this week, which we will complete tomorrow. This charge station will allow us to test our autonomous balancing methods and (hopefully) get them smoothed out in no time. In the future, we will include notable segments of code in this section, but we don’t have much to update on other than the previously mentioned items. 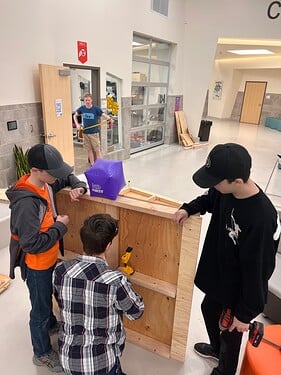 In the past, the ALChemists have struggled to maintain a schedule. To combat this, the team leadership drafted a Gantt Chart to keep us on track this year. So far, the team is ahead of schedule and operating quicker than in years past. 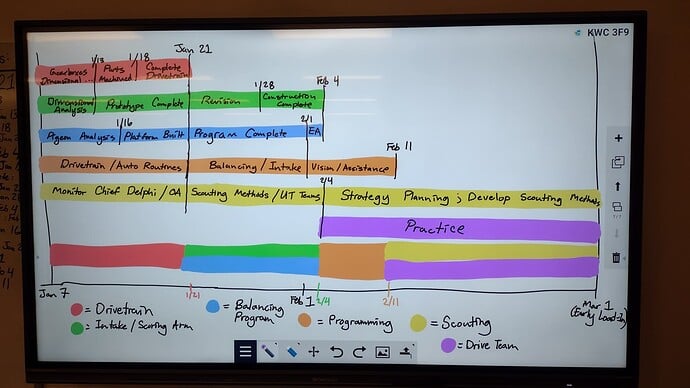 This week, the ALChemists were able to complete the construction of a practice Charge Station and Scoring Grid. These elements will be useful for testing our autonomous routines as well as developing an endgame strategy. They were also able to conduct dimensional analysis for our drivetrain and intake device. Our programming team tested a “Robot Assist” to get three robots on the Charge Station for endgame, even a robot with three-inch wheels.

Our Engineering team has been working extremely hard this week! They were able to complete a wooden copy of the Charge Station and Scoring Grid. In addition, they were able to come up with a concept for our Intake Arm and conduct dimensional analysis to begin manufacturing our Drivetrain. 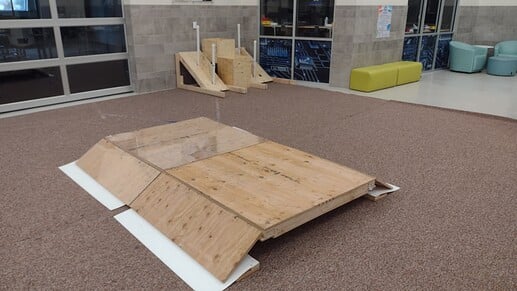 Intake Arm, Iteration 2
Last week, we mentioned that we had needed to revise our initial concept for a universal intake device. Our device, which consists of a rotatable arm and a mechanical “wrist”, will feature two pneumatic pistons that will clamp in and out to grasp both game pieces. The “fingers” will consist of molded silicon for extra grip, and will be placed on a bearing mount so that a cone placed in our device will automatically right itself due to gravity. See the video link below for a demonstration: Intake Arm (v2.0.0) - ALC Robotics 2023 - YouTube

Drivetrain
Our drive base this year will be a West Coast Drive, which is a system we have utilized for the past three years and have come to love. We decided to rebuild one of our old two-speed gearboxes, which meant cleaning the motor grease off of the parts we wanted to reuse. This cleaning procedure also allowed us to take inventory of which gears needed replacement and make a decision on whether or not we want to possibly change our gear ratio. 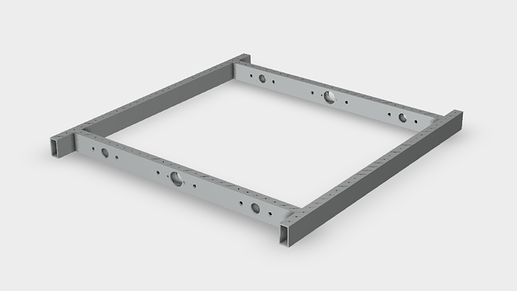 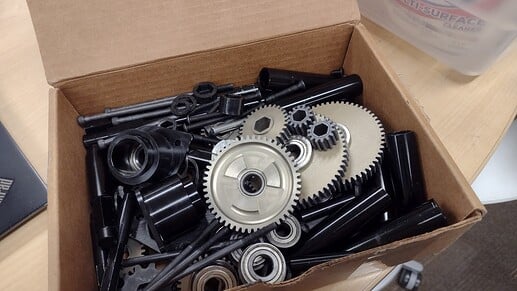 This week, the programming team used our newly-constructed Charge Station to develop autonomous and endgame strategies. We conducted a test of a “Robot Assist” to ensure that three robots could fit on the Charge Station during endgame. In addition, we updated all the firmware for our robot parts.

Autonomous Balancing
Our programming team came up with a series of ideas and a way to test each individual step of the process for Auto balancing. Two of them are listed in the image below. In addition to these steps, we discussed the possibility of using a PID Controller for our Auto Routine if these two methods do not work.

Endgame “Robot Assist”
Our team used three robots to test how difficult it is to get three robots on the charge station at a time for the endgame period. We discovered that if we use a robot with a heavier weight to push the charge station downwards, the other two robots (including one that had three-inch wheels) will be able to climb onto the station. The robot pushing down the station had to be right on the edge of the station in order for this test to work. We timed this routine, which took a total of 28 seconds to complete. This routine would be much faster normally, considering we drove slowly onto the charge station to ensure everything would work. See the video here: FRC 2023 Three-Robot Endgame Test (3405) - YouTube

That’s a great video to capture the process - thanks for sharing!

Going to be tough to convince me that 3 robots is worth the time/risk if you’re able to get the auto dock/engage points. I imagine we’ll see a lot more success from alliances having 2 robot docks and engage and then maybe one parked

Totally agree. Getting three robots on was very time consuming and took a lot more communication and effort than will probably be available at the actual event, given the noise in that kind of environment. It was still helpful to know it is possible, but would require teams to really consider the width of each robot and how much time they want to give up scoring on the grid versus on the Charge Station.