Happy Kickoff! Our team has been working hard over the weekend coming up with ideas of how our team can tackle this year’s challenge. Right now, we are developing prototypes of the ideas we came up with, but here’s a brief overview of how we got here:

Right after watching the game animation, we looked at the rulebook and answered the following questions:

And using those questions, we went into making a priority list of what we wanted OUR robot to do. 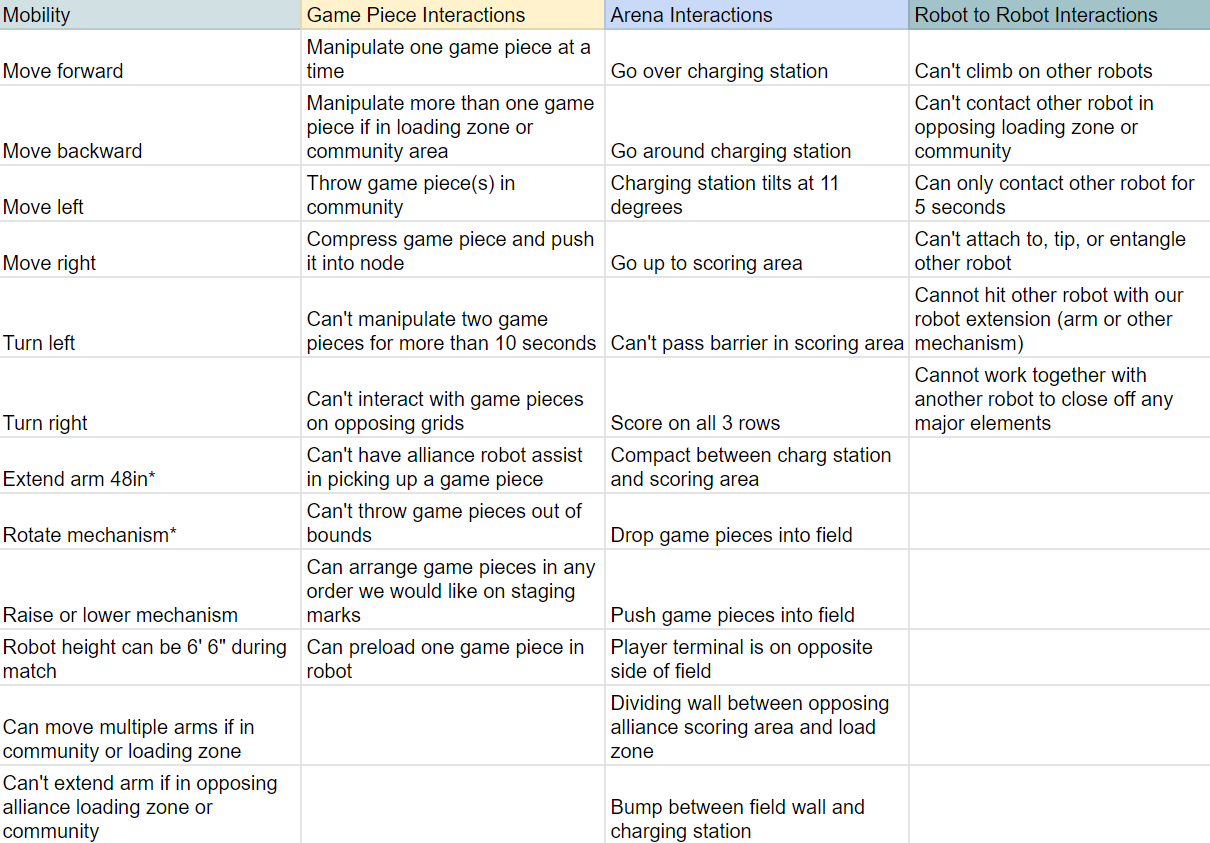 Once we have our priority list, we start thinking of HOW to do those actions. We took our priority list and figured out what we would need to have in order to do what we want it to do (ex: Claw, lift, arm). Some of the ideas we tested out by grabbing some scrap pieces and using people to act as the “mechanism”, which we used to eliminate or further understand some of the mechanism concepts we came up with. The biggest things we learned from this were:

Now we have reached our prototyping phase, where we took the ideas from our brainstorming and made them more accurate. We have started prototyping four different types of claws (Flat, curved, roller, and passive/reverse piston). We have yet to test any lifts or arms.

For prototyping, we settled on replicating four “unique” claw designs, and one extra claw design similar to one we were already working on. 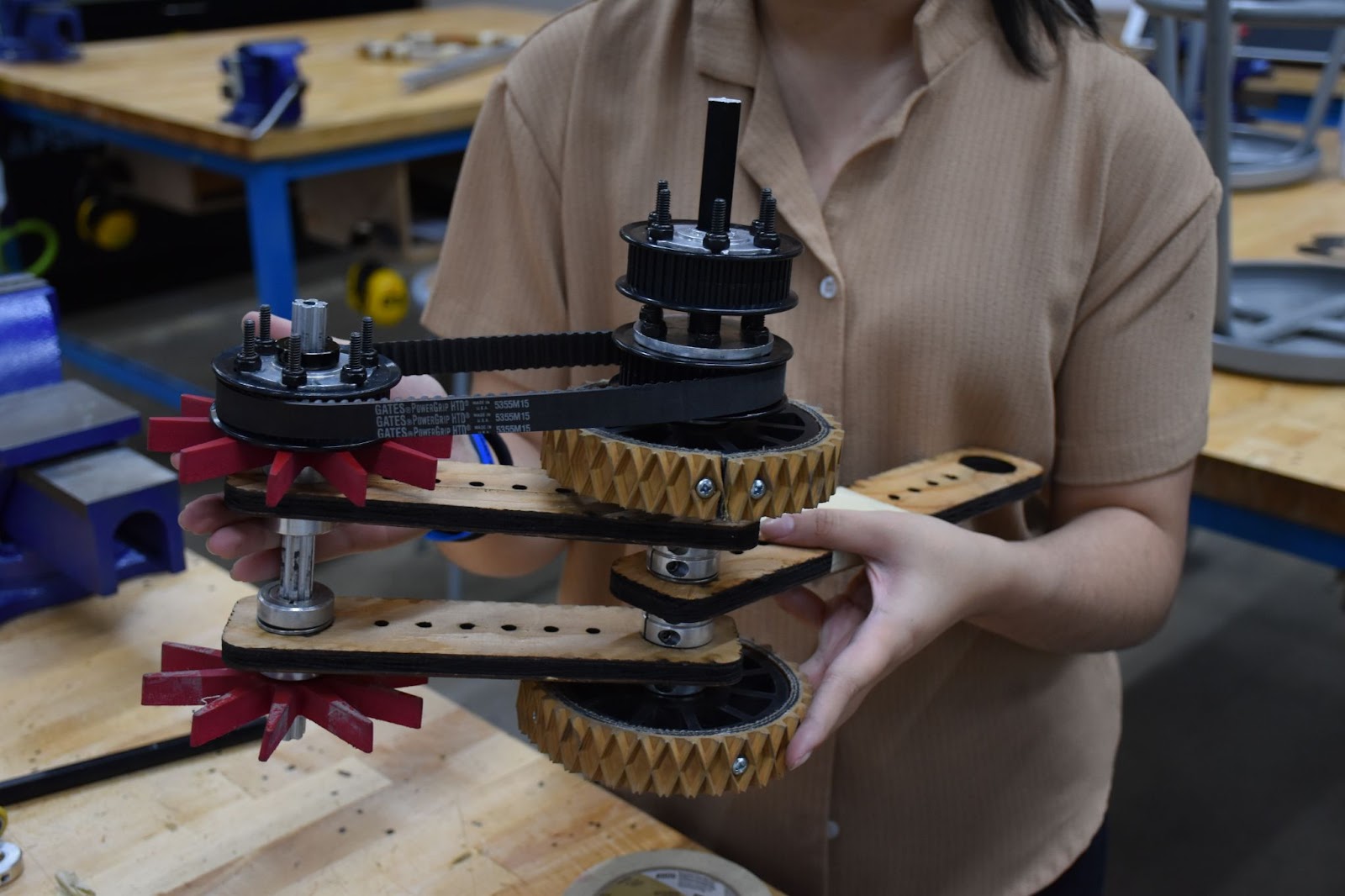 Roller Claw: Similar to 2018, our roller claw uses wheels to pull both cubes and cones in and “hug” them by pulling the arms together passively. After testing, we realized this design was extremely heavy, did not work very well when picking up cones, and was more complex than our other designs. 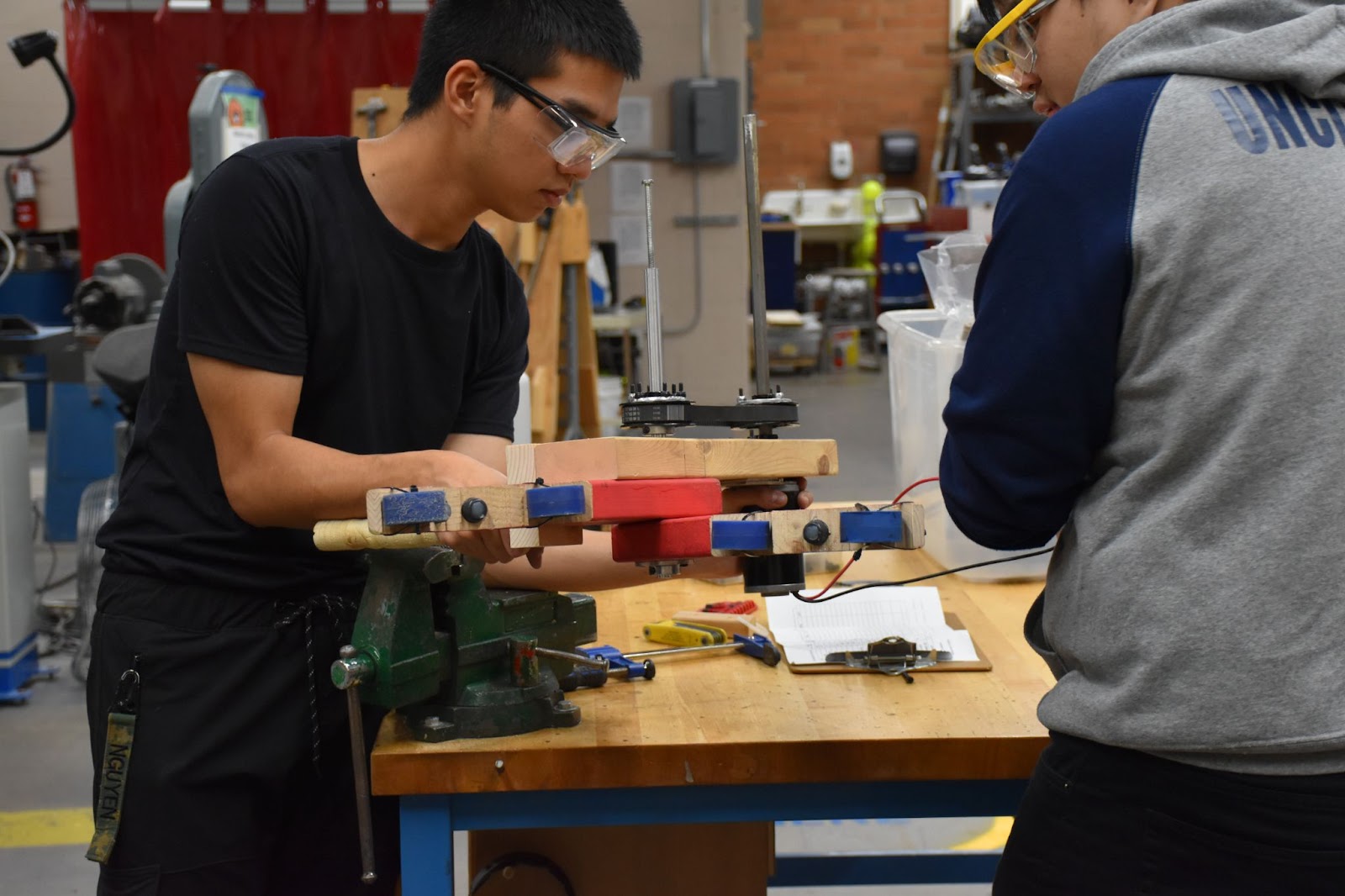 Round Claw: The concept of our round claw was to create a curved grip with arms/pinchers that rotate around an axis to better grip cones, but also pick up cubes. Testing revealed that this design would take some trial and error to figure out the best curve or curve+flat combo to pick up both game pieces, but it could be made light and with few materials. 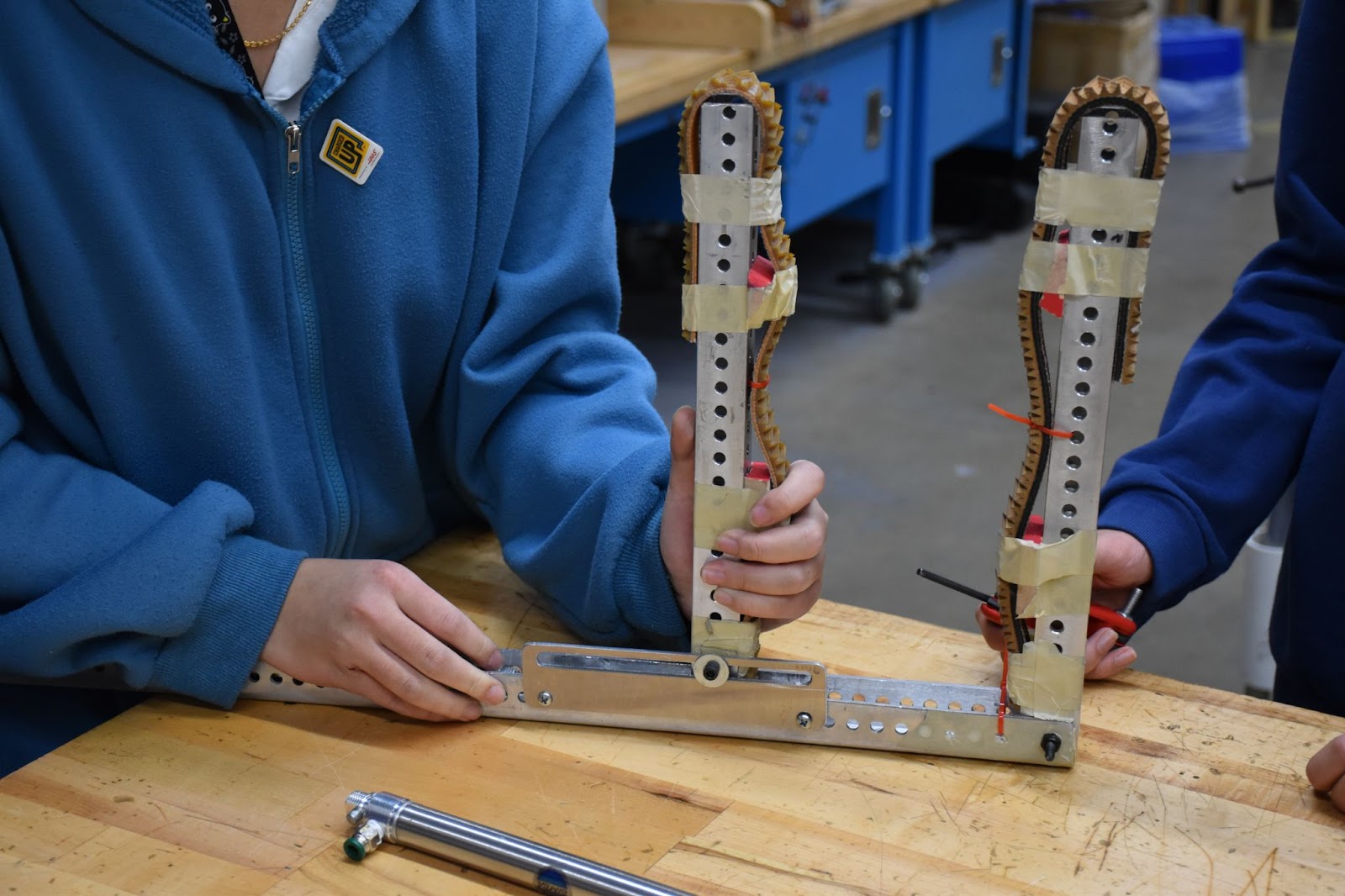 Flat Claw: Our flat claw’s concept was to use a flat gripping surface with two arms, with one arm fixed and the other arm free to slide, to pick up both cones and cubes while being actuated with a piston. We were unable to successfully prototype with truly “flat” claws, and we had to add lumps to the claw to grip the cone. Further testing showed the claw was no more effective than the Round Claw and was more vulnerable to damage. 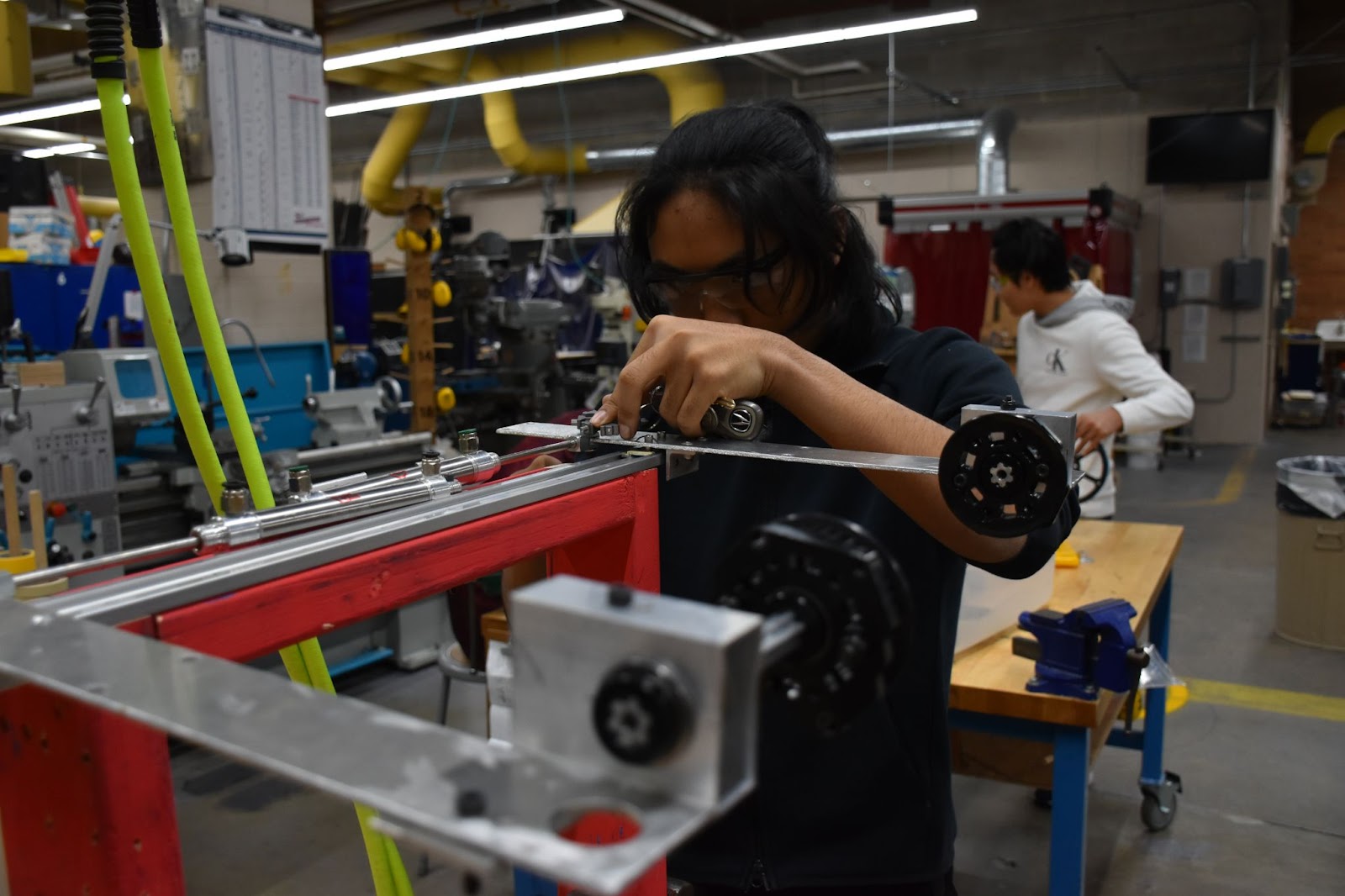 Reverse Piston w/ Rotating Grips: Based on a design from a Ri3D, our reverse piston design uses arms with wheels or hubs on a freely rotating axis to grab a cone or cube and orient cubes upright when grabbed+lifted. Our testing proved this design was very effective, however, it would require more weight than the Curved design while achieving the same goal (pick up from shelf, dropped cones aren’t a priority) 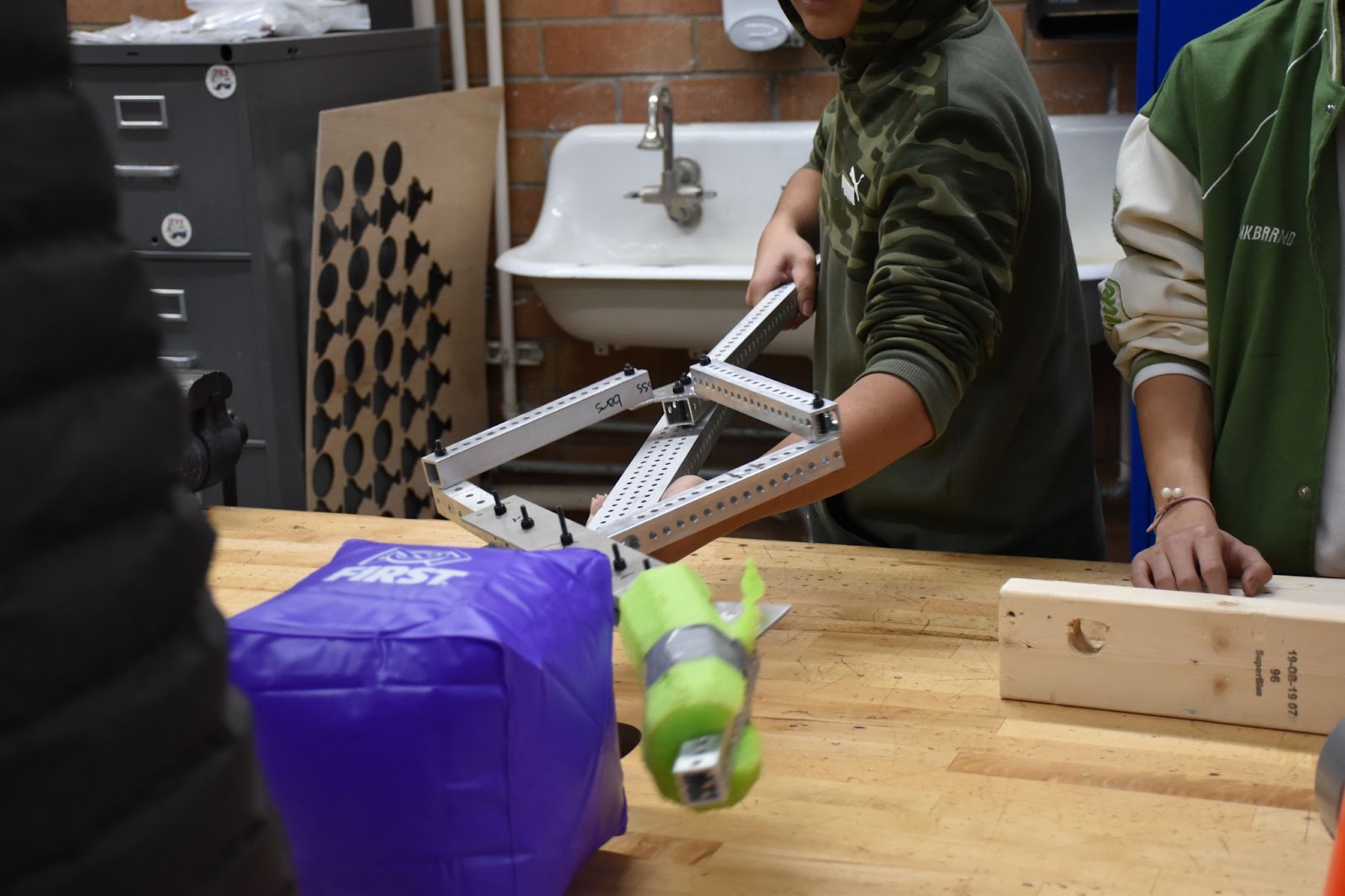 Scissor Claw: Essentially a different version of our Flat Claw, the Scissor Claw would rotate two flat arms around an axis like scissors to grab both cones and cubes. After adding pool noodles and grippy tread to the arms, the arms were able to pick up both game pieces, however the grip was not all that strong. 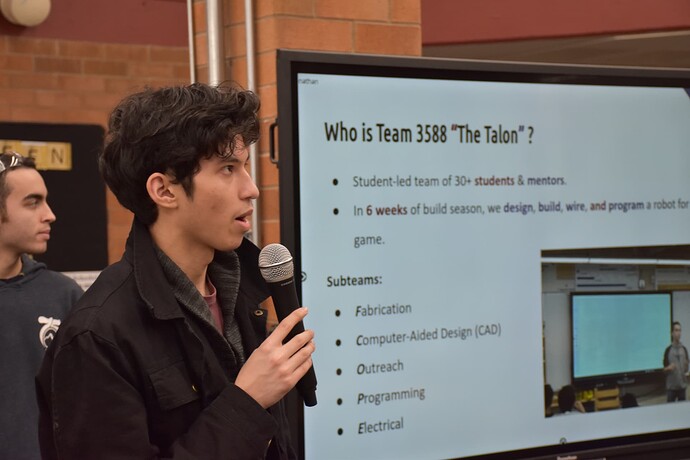 Although our open PDR may not have had as many attendees as last year, we received quite a lot of good input. After presenting our overall game strategies and robot concepts, we received the following from our audience:

While this is not all we received, these were the most relevant pieces of criticism and advice we received.

During our team only PDR, we went into more detail on the criticisms and advice we received during our open PDR. We then used that feedback to decide on our overall strategy and robot concept. In terms of strategy, we thought through the most efficient way to earn points and the best way to avoid being defended against, as well as the best way to defend, which landed us on two drivetrain concepts:

Considering all of these pros and cons, we ended up settling on Tank/Drop Center because it provided the ideal balance of speed to defense that we were looking for.

We also went over our lift mechanisms, which after PDR were:

With that being said, we ended up going with the Elevator+Telescoping Arm. The team decided that the elevator and arm would cover a wider range of possible points we would need to reach, as well as be quicker overall (plus it looked kinda cool). 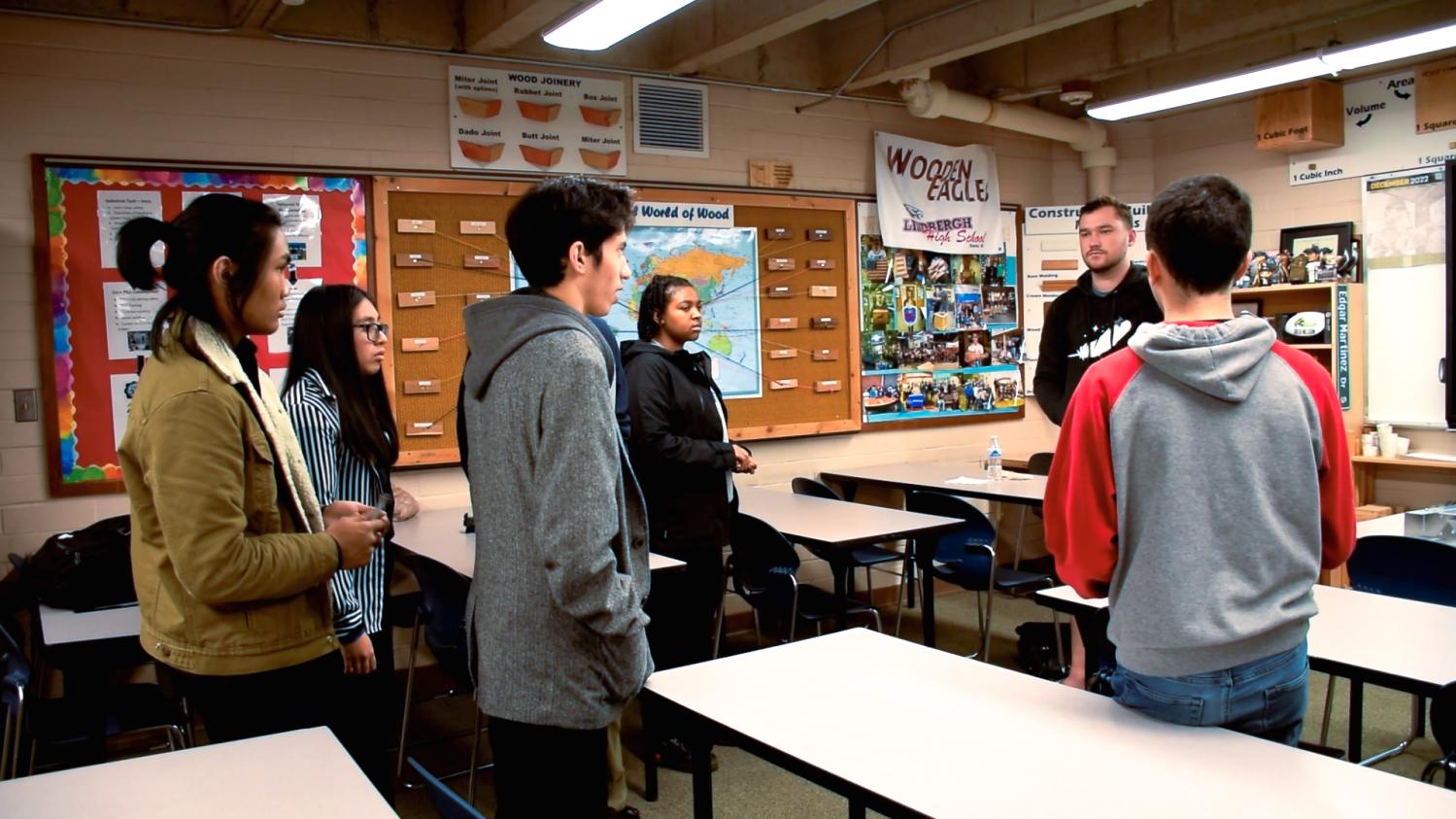 Finally, our team discussed which claw mechanism would fit us best, and after some tips from our mentors we discovered that:

Taking that into consideration, we decided that the best design for us would be our Curved Claw design with a Piston to actuate the motion. This would allow for quick pickup of both game pieces as well as easy replaceability if the claws were to ever break.

Thank you all for reading over our post, and unfortunately, the post was a bit delayed. Nevertheless, we’re heading into our 3rd week of the build season with a plan of action. We’ll make sure to keep this thread updated with significant developments in the coming weeks. The week two recap will be posted early next week, so be on the lookout!