Hey you, yeah you. Have YOU ever wanted to have a mechanism spin 360° x ∞ but those pesky wires get wrapped up? Well, do I have the product not legal in FIRST yet

for you. This probably already made invention came to mind when designing a school personal robot to show off the Robotics team. In hopes that we could possibly get some more recruits. We are making a t-shirt cannon robot, it will also have other functions, but the cannon is the main feature. We stuck a server drive on a custom harness for the cannon. However, in order to pull the trigger, we need to run wires from the cannon to the Electrical board, and every way we tried to run the wires we found it would just wrap up the wires and not give us a limited range of motion. So, our solution is to do wire brushes attached to the pivot point of the swerve drive and the output would be copper tape around a circular thingy. This is best described by the CAD model a buddy (Justin - Cracked at FIRST Robotics) and I made. My 360 Wire Connection Assembly and his Full Tshirt Assembly 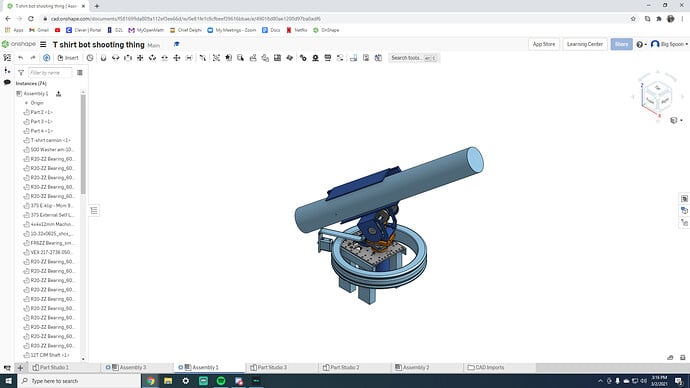 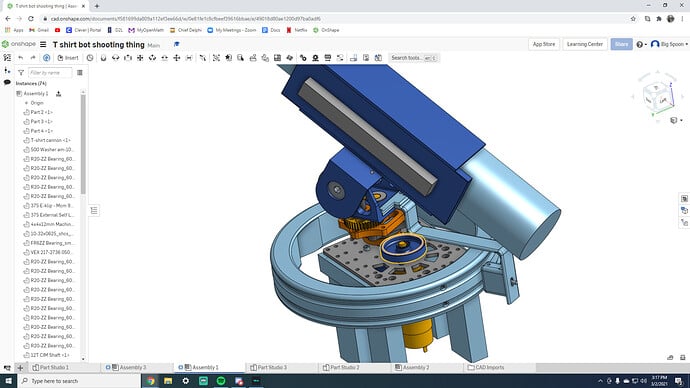 Slip ring is the correct name, though this appears to be somewhat of a different type of slip ring. Circular bus bar, maybe?

This is roughly the same method used to commutate inside of a brushed motor (CIM, 775pro, and BAG are examples of brushed DC motors). In place of a wire brush they use a spring-loaded piece of graphite. The graphite is better suited for carrying the high currents that the motor sees.

Technically yes but if it is different does that mean I invented it??? If so imma call it the Super Wire Doer Deluxe 9009 V. 7. But in all seriousness thanks for the info

Nah, trust me, you didn’t. I’ve seen ‘em something like 15’ diameter, industrial grade. (Also, in that case, the brushes and contacts were on the outside of the rotating part.)

I’m just not sure of the actual name. Pesky terminology…

The term is slip ring and they are most often used these days in car alternators. Under FRC rules, they must be COTS parts designed for the current in use and may not contain mercury or mercury “wetted” contacts. See R54.