Team #4905 (Andromeda One) was taking inventory this year and noticed we have a lot of Denso Throttle Motors and thought it would be nice if we could use them somehow. Not finding any readily available gearboxes we decided to try and design one that we could 3D print as an off season activity. What started out mostly as a lark, turned into something that could actually be useful. The printed PLA gears and gearbox seem to be plenty strong for the limited power of the Denso motor.

After discussing this with the team we decided to publish the design and open it up for all teams to use in hopes that some of the Denso motors could be used for more than just paper weights. If you decide to print one please let me know your experience. If other teams find this useful We will endeavor to improve it. The files for 3D printing can be downloaded at:

This gearbox was designed to work with the Denso Throttle Motor that is given out with the Frist Robotics KOP for several years. The gearbox housing and gears are entirely 3D printed using PLA plastic. PLA seems plenty strong for the limited power...

Good thing you decided to share it, otherwise you wouldn’t have been able to use it because it was designed before kickoff.*

I know I’ve seen a few others of these gearboxes floating around CD but I can’t find them right now. They tend to not get a lot of use in this age of infinite motors because you can just use a 775Pro on a VP or a BB775 on a banebots gearbox instead and for a little more weight you get less volume and much more power, but I could see a few instances where this might be a good solution.

*Standard disclaimer that this year’s rules may differ

Looks like a great looking gearbox, our team developed something similar last year. We manufacture the plates from polycarbonate and the gears from acrylic and have donated them to a lot of teams, especially those outside of North America who have problems getting parts. 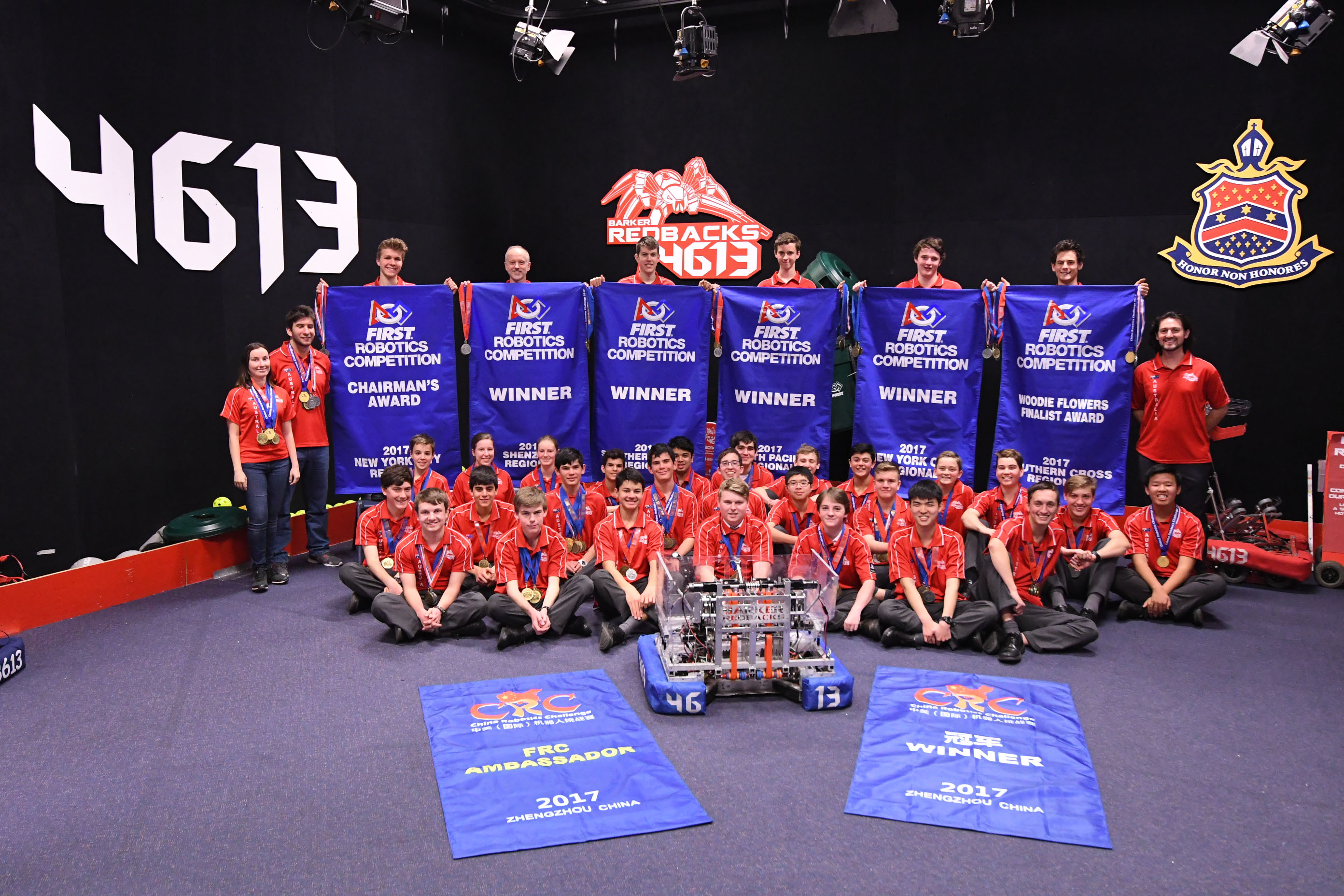 What reduction is it? We found a single stage 7.5:1 spur reduction to be ideal for running intakes, conveyors and wheels in our testing.

The motors don’t have a lot of power but they are extremely reliable and unkillable, coupled with a decent gear reduction, Plenty of different mounting holes and a 1/2" hex output shaft they can be very useful.

We have a 3D printed design and I’ll happily share it with you once I get back to my PC after kickoff tomorrow.

Based on photographs on Thingiverse, it seems that the motor mount doesn’t account for the flanges on the face of the motor. I would suggest using one of the following features to provide a better load path for the compression load resulting from the mounting screws:

Ari423 - I like the idea of using adding a second motor, I’ll definitely do that.

Pilleya - The gearbox is designed with 10:1 and 18:1 gear ratios and is designed to drive 1/2" Thunderhex shaft. It could easily be modified for 1/2" hex. We use a lot of Thunderhex so I designed the gears to fit that. Total weight is less than one pound. I’ll look into adding a lower gear ratio, but that will probably be a new gearbox with a single gear off the main motor. Probably even more useful in this case to add the second motor option.

WIG1350 - The design does include grooves for the gearbox plate, but they are not deep and the motor does ride proud. I agree that bosses would be nice but including them would have required support material for most of the gearbox face. Recessing the motor would make the gearbox thicker by that amount. I do agree with you that the motor mount design is not optimal. What might work is printing a standoff plate that would mount on the engine before mounting to the gearbox. That would actually allow me to thin the whole gearbox down a little.

Thanks for the positive feedback everyone. I’ll look into these improvements as time allows.

I 3D printed a gear for this motor for aerial assist. I was trying to get as compact as possible and could not get enough reduction in the space allowed, so I used a ring gear on a flat plate. Regular ring gears are expensive, seldom available in the size you want and can’t be made on a flat plate. The ring gear also makes a slightly stronger contact area.
The gear is sized to mount on a 1/4 inch bolt centered in a 1 inch square tube. I strapped the motor to the tube with a hose clamp and some double faced tape.

It was not strong enough for handling the huge balls in aerial assist but would have no problem with this years small ones.

I would also like to see a gearbox that matched the mount holes of the versa planetary but that might be too compact.

As to the usefulness of this gearbox/motor verses the more powerful ones. Most teams can 3D print this for less than 1/4 the cost of a versaplanetary and you can stall this motor for a lot longer than a 775pro. 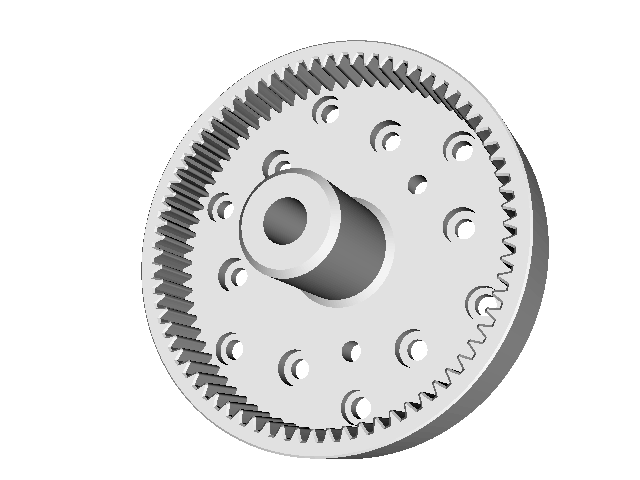 Does anyone have the motor specs for these? I did some searching but all I could find were old posts with now broken links. I would really like to get some data on the motors’ power before I use them on a robot.

As to the usefulness of this gearbox/motor verses the more powerful ones. Most teams can 3D print this for less than 1/4 the cost of a versaplanetary and you can stall this motor for a lot longer than a 775pro.

I don’t know the exact motor specs, but I am 100% certain that these motors are nowhere near as powerful as a 775pro. If you don’t need a lot of power, that’s fine. But I would definitely not call this a better replacement for a 775pro. That being said, I would love to get the STL or STP for that ring gear if you don’t mind PMing it to me.

Does anyone have the motor specs for these?

Yeah… but not within an order of magnitude of a CIM’s power.

That is linked from this page: http://www.firstinspires.org/resource-library/frc/mechanical-resources

We are actually going to use this motor this year, I never thought the day would come! We are also 3D printing a gear and gearbox for it, intended to turn a turret or two. Just a single reduction for us though, 80:12. Printed on a Makerbot. The total assembly weighs less than any of the window motors in the KOP, which is nice.

Can send CAD files if anyone is interested, this is the first iteration. The next one should be a little better.

Lets see if I can post the stl of my ring gear… Had to zip it.
The holes are for mounting a vex 2 inch wheel because that was what we had.
I never thought I would use this again so I never bothered posting it.
The actual CAD file was done in the program that came free with the CUBE printers they gave us that year. So I don’t think that would be useful.
But let me know.

UPDATE: After a full season running our gear handler with two of these gear boxes as well as a bunch of off season events we finally opened then to see how the gears fared. Honestly I could not tell the difference between the used gears and what they looked like new. We probably had close to 1000 actuations if you include practice and off season events.

During our the first week of competition we removed the limit switches and just ran the motors into hard open and closed stops. The limit switches failed regularly causing issues so we decided to just run to hard stops. I though for sure this would damage the gears, but I could not find any wear once the gearboxes were opened. Note that we were not using full power, but I think it was around 60% so there is a good chance they would survive a full power stop.

One last note was that we used “Super Lube” to grease the gears. That seemed to work very well and did not degrade the plastic as far as I could tell.

Sorry I don’t have pictures of the gears, but honestly you could not tell them from new. I think the whole system is over-designed.