Hello all, there was a discussion last night in the FRC discord about Lazy Susans and I mentioned the 3D printed turret we used this year. So this is the information about it. 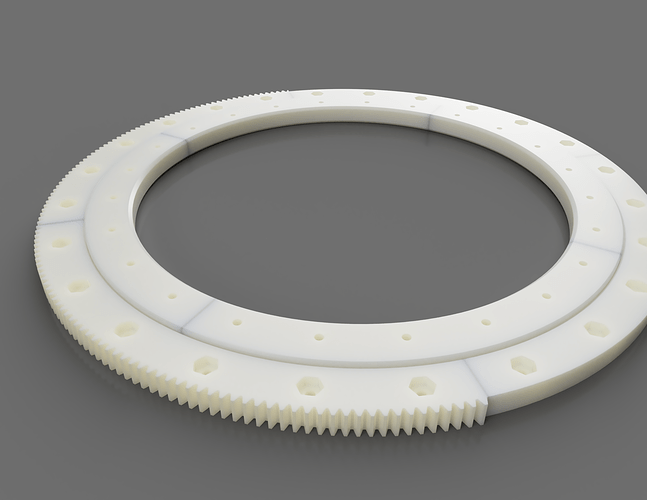 This year we wanted a shooter that had hood adjust and elevation adjust. I will discuss that in-depth once I get around to doing a full robot writeup. For now, lets talk about our Lazy Susan.

Why a Lazy Susan
The primary reason was while designing the shooter, I had a lot of vertical space issues. Since ATHENA is supposed to be able to go through the trench, we decided that the max robot height should be 26.5". Having a Kit of Parts chassis on 8" wheels and a shooter with a 6" wheel and a hood that went all the way up to a 30 decree shoot angle, meant free vertical space was pretty much nonexistant. In fact, I had only 3/8" to fit the turret into which eliminated a bearing stack. I also didn’t even consider going with the Armabot turret because that would have been more complicated to integrate into the system, not less. This fact actually leads me into the next section.

Why not use something like the Armabot Turret
Simply because that turret wouldn’t have fit. ATHENA is an exceedingly compact robot with almost no free space. In fact, the shooter itself is only a few millimetres from going over the edge of the robot in the back.
However, even if the diameter of the Armabot turret weren’t an issue, I would still have designed by own because designing one that was tailor made to the spacial requirements at hand, allowed the shooter–the more important component–decide where the mounting holes needed to be, thus not compromising it’s function. I was also able to build the teeth for the turret motor into the outside of the Lazy Susan (by the way, if you try to do a sketch on something with 235 teeth, Fusion will have an aneurysm).

Manufacturing
You’ll notice that both the inner and outer races are split into four sections. This is because neither the inner or outer race would fit on our Markforged 3D printer in their entirety. The races were printed out of Onyx with 4-layer walls and 37% fill. The balls used used were 3/16" diameter steel ball bearings sourced from Amazon (we got 150 for about $5, Home Depot sells 50 for $10… hmmmm).

Assembly
The assembly process was the difficult part. All four sections of the inner race were attached to the shooter’s base plate. Then, 3 of the 4 sections of the outer race were mounted to the shooter mounting plate. Then we put the two sections together (this is the reason behind the recessed 6-32 nut holes). The fourth outer race section was left off so that the ball bearings could be fed into the system much like how Civil War-era rifles were loaded with shot. Once all 100-120 balls were loaded into the bearing, we carefully put the fourth section in and spun the bearing over and over again. I oversized the bearing slot by .002" which was perfect, but only after the bearing was broken in. At first you could spin it by hand, but it certainly wasn’t easy, however, the BAG motor with a 20:1 versa planetary gearbox had no issues. However, after competing in one competition the bearing spins perfectly. The reason behind spinning the bearing was not actually to break it in. Rather, it was to make sure the balls were relatively evenly spaced throughout the bearing.
Now, why didn’t I just put a fill-port in the side of the bearing? Because a fill port would have potentially caused too much of a blemish on the side of the outer or inner race that I was not willing to risk.

Other Notes
Backlash:
One of the potential problems with Lazy Susan bearings is backlash. The Triangle T6LS we used in the bottom of our spindexer certainly had a lot of this. However, because of the initial tight fit and the fact that the specific diameter of the ball slot was formed by the balls themselves, there is no backlash in this bearing.
PLA:
We have not attempted to make this out of something like PLA or ABS. However, it may be possible I may design a smaller version of this bearing and see if I can print it on a PLA printer in the off-season to see what happens and if I do, I will make a post on CD about the results.

Thank you for reading this and I hope it helps.

Why did you go with a gear interface, rather than a pulley? I’m always (probably irrationally) concerned with 3dp gears (even markforged) stripping, pulleys spread the load out and mitigate the issue.

These gears are 20DP and 20 PA and they held up quite well. We had some issues with the turret spasming around quite violently and the gear teeth still look pristine on both the bearing and the pinion. I decided not to go with a pulley because of size constraints and ease of design. Also, one of our mentors designed a hunting-tooth planetary gearbox for things like arms that used Onyx gears and it works really well. The key is making sure you have a thick enough wall so that the gear teeth are printed at 100%.

How much do you think the 20 PA affected the strength of the gear? It’s fine if you’re 3d printing both gears, but would you trust a 14.5 PA gear, if you wanted to mesh well with Vex gears?

I’ll ask the mentor for the gearbox CAD and I’ll send you the file.
The 14.5 should be fine, it just won’t stand up to as much abuse (why VEX refuses to go with 20PA is beyond me, maybe it’s because they don’t like Andymark). One thing to keep in mind is depending on the application, having Onyx gears on Onyx gears can rip them up. The turret was fine, however apparently Paul (the mentor) ran into some deformation issues with the Hunting-tooth gearbox

(why VEX refuses to go with 20PA is beyond me, maybe it’s because they don’t like Andymark)

What? Thought they were 20! Now I’m really lost

I think its more that I dont use AM gears so I dont really look at their specs all that often.

I was about to say, hunting tooth is normally a really undesirable phenomena.

Why? what’s wrong with (mutually) prime numbers in a gearbox, other than making the ratios more difficult to express? I really like that 19:45 stage in a number of AndyMark gearboxes; I actually introduced it into the most recent pair of drivetrain gearboxes I’ve built even though those stages were designed as 14:50.

Hunting tooth (the phenomenon) is when you have two gear teeth on meshing gears that are perfectly, slightly misformed and cause vibrations when they mesh. It’s like one tooth is hunting the other to cause that issue.

Note that paradox and similar gearboxes where the large gears differ by one tooth are likely to be hunting tooth gearboxes, which may explain @Harper.Nalley.4915’s confusion of the two.

Nah, I just got the names switched around.
If I’m reading what you’re saying correctly, you design a hunting tooth gearbox to decrease the wear? Because the way it was explained to me is a Hunting Tooth gearbox with two numbers that have no common factors will wear on every tooth

This will spread any anomalous wear due to a bad tooth equally. If it’s the difference between (say) 12:72 or 12:73, the gear can survive about twelve times as much operation before the same amount of damage is done to any given tooth. There’s just as much damage, but the load is distributed.

Okay, yeah, That’s what I thought