WARNING, BAD IDEAS BELOW, BUT WHY NOT?

I’ve seen robots over the years including more and more 3d printed parts and honestly its a simple and easy way to replace parts when they eventually break (cause things will break).

so that got me thinking, how many is too far when using 3d printed parts? what are the limitations? (besides the obvious technical aspect and computing components) i cant see a limit besides build strength.

I say we start small

Whats the feasibility of 3d printing an entire drive base? how about its WCD gear boxes and gears?,

(going up)
How about 3d printing an entire swerve drive?

I believe 3824 has been or used to print a large part of their robot out of ultem. 1989 uses more accessible printers and materials. Not what I’d do for FRC, but still super duper cool.

its a start, but how about entire mechanisms? how did it work and how will it function?

We 3d print a lot of our robot on hobbyist printers (I think we have a few petg parts this year, but mostly ABS and PLA). Rotational stuff is hard, don’t print your drivetrain, etc.

Many of the perceived limitations of 3d printing are more engineering challenges than real barriers.

I also think this render of all of the printed parts on our robot in 2017. 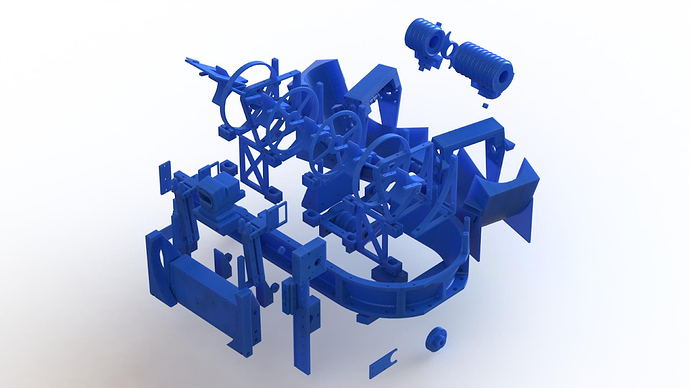 We aren’t crazy over the top like the teams that Akash mentioned, but I think we integrated printing more effectively than a lot of teams

Last year we printed our entire hatch panel mech out of onyx and we have printed high-reduction gearboxes that will do up to 37lb*ft of torque before stripping the gears. If you 3DP gears, you’re going to want to do a lot of herringbone gears. As for a chassis, you’re gonna have to reinvent how a chassis is designed. I don’t think your robot will stay under the $5000 limit

I’d say the larger issue is printing larger parts, not necessarily stronger parts. There are a lot of great, strong materials you can print out of (NylonX, Onyx, etc.), however most print beds don’t exceed a 12" cubed box, so when you start to get to larger chassis or elevator pieces, you have to join together multiple parts to make an equivalent length part, which can start to become problematic.

IMO 3D printing is best when what you need requires complex, non-two dimensional geometry, or can decently reduce the number of overall parts or operations used to make it from other means (milling, laser cutting, water jetting or plasma cutting, etc.). This can include: one piece gearboxes, bearing blocks, spiral/helix elevator spools. wheels, etc.

So for example, lets take a swerve drive. the central module part of most swerve drives (the 2910, 1323 type) requires at minimum 3-4 parts, two wheel forks, a central pulley/ mount that attaches to the large bearing, and sometimes a gear to measure the rotation of the central module on a 1:1 with an encoder. with 3D printing, you can replace this essentially with two parts, by “fusing” the two forks and the central pulley/mount together, and a top part for the encoder reading, reducing parts, likely any complexity from the amount of milling these parts require (2910’s parts require ~2 runs in the mill per part), as well as a reduced number of fasteners.

In their build blog, 6328 discussed 3d printing a gearbox plate. The quote is from this post: FRC 6328 Mechanical Advantage 2020 Build Thread

While we’re waiting on some metal to get cut for our gearbox plates we decided to print a few on our MarkForged out of Oynx with Fiberglass Inlay. We’re going to drop them into our practice robot frame and see how well they hold up this weekend. I think they came out pretty slick and feel very solid. 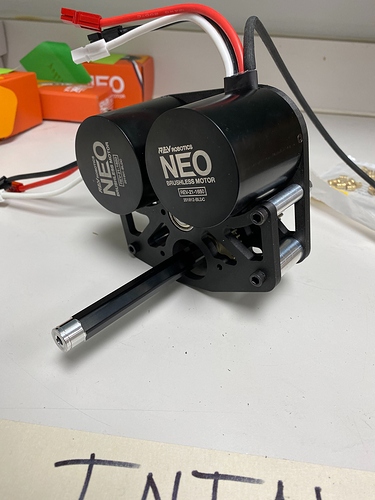 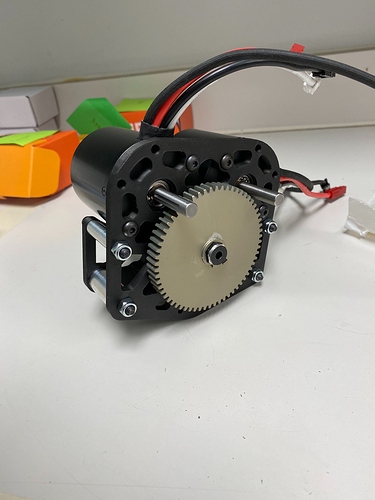 They also discuss how it held up in their build blog.

Also, this year’s Robot in 3 Days from Sherbrooke used laser cut wood quiet extensively. Perhaps in terms of strength, all of the wood could probably be replaced with 3d printed parts.

Soooooo a lot of this is dependent on what you’re printing out of, since some materials are obviously stronger than others. If you’re talking some sort of upgraded nylon, you can get away with printing gearboxes and the like as long as you rib them (like the vexpro ballshifters). If you’re printing out of hobbyist or desktop printers (even the reinforcing markforges) I would be wary about printing largely frame pieces.
If you have access to something like a large SLS printer that can do materials like Glass-filled plastics, you can get very very high rigidity parts. While the chassis design would have to look a little unusual, you could certainly make a drivetrain and frame largely 3D printed, especially since these printers don’t need support material and can have very large work areas, so you wouldn’t be wasting much material or losing much strength. The downside to this is that these printers cost a bajillion dollars.
For motion components, I’m wary of printing things that aren’t pullies in really any material, since there’s so much stress concentrated in especially gears. While this wouldn’t necessarily break the gears, you could lose a lot of efficiency (especially since with plastics like nylon their ability to radiate heat is really quite bad). So… Yes, but actually no.

Quick question: is this something you are genuinely considering, or is this more of a “summer CD” topic?

its more of a “yo… what if i did this just to see how it worked” type of question.

my team is looking into more advanced ideas but we dont know where to start so im suggesting modeling our own devices such as omni/mechanum wheels, h-drive, or a swerve module, but dont want to spend the 300+ dollars to just see how things works. (why buy it when you can build it)

my main question is would 3d printing your own swerve drive work?

To answer your swerve drive question: Unlikely, based on the materials you have on hand. most 3dp modules are printed out of materials such as Onyx, petg, etc., but not abs or pla.

Prusa’s can absolutely do PETG…

I’ve got a set of modules done in PLA+ that seem fairly stable. Geometry can go a long way. This whole pandemic thing coupled with some life stuff has put that on hold but I’m hoping to get it back under way in a few weeks. (not that I expect the pandemic to be resolved by then so it might be difficult to cut some of the parts but who knows…)

Sorry, I should clarify: I know prusas can do petg, but was more referring to what they have on hand (abs and pla), than what the prusa is capable of. But yes, ofc you could buy some petg to do a project like this.

As more of a personal opinion though, I wouldn’t dive straight into 3dp swerve unless you’ve had some success with a regular swerve drive. swerve drive is decently complex, and trying to 3dp just adds another layer. Plus, the COTS swerve drives out there are a pretty good starting point anyways.

ok, but could i if i didnt care how WELL it functioned? just that it does? hell, most parts could be metal but the most expensive could be cheaper?

The issue lies in that the most expensive parts (bearings*, bevel gears and motors) cannot be printed without a significant hit to performance. You could print a swerve for funsies, but running it in competition is pretty questionable.

Not enough size you say?

3D printing has the potential to democratize manufacturing. Since 3D printers are easy to use and low cost, they allow anyone to make incredibly complex things. I'm confident that anyone reading this has seen something cool made on a low cost hobby...

It seems more practical for VEX or FTC, but you could just buy a large scale 3D printer and print the whole robot in one piece!

I’m surprised @mpirringer hasn’t stepped into this thread yet. He had quite a few posts showcasing their 3D printed robot and mechanisms, including a recent one showing the whole robot.

Sorry I am currently putting in 18 hour days printing and making face shields and masks and keep a couple of groups running by offering and exchanging advice if and where needed. Thanks for pinging me - this is my first time on CD in probably 2 weeks or so