He appears to be printing with PLA (specifically Prusa’s Galaxy Black), which got me wondering whether PLA would be a decent choice for similar parts in a robot elevator. Opinions or Experience?

I can tell from experience that this doesn’t work for FRC elevators. We tried 3D printing bearing and pulley blocks on our 2019 robot elevator out of PLA. I don’t have much pictures but our design was basically PLA versions of the kind of bearing blocks 254 like to do in aluminum on their elevators. 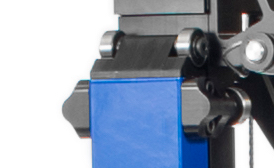 They all broke at one point or another during assembly, on the practice field, and during competition (this isn’t the only time that happened in that event, we had to run back to the workshop and disassemble replacement parts off the practice robot and were very lucky the event was at our hometown). By our second event, every single one of them (except for 2 pulley blocks that were very beefed up) were replaced by plastic or aluminum billet parts.

Maybe a different, chunkier design might work, but with my experience in this I can’t say I recommend this idea at all.

We ran a very similar setup on our 2019 bot (only a single stage elevator though). We used PLA for the center bearing block and billet aluminum for the side bearing blocks. All of the bearing blocks lasted through the entire season and off-season with zero maintenance other than occasional lubricant on the elevator tubes. @fharding was the one to print the blocks, and I believe it was done on a prusa 3. 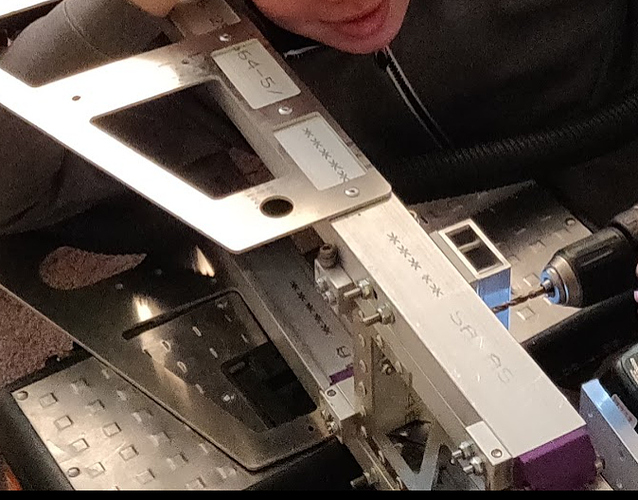 Any asymmetric load on the elevator is going to torque the side bearing blocks. In the video, you can tell that he was getting some sick nasty cantilever on the bars, and it was wearing down the aluminum. Since his bearing blocks were very large, it was less of an issue, but if you put PLA bearing blocks on a standard 2x1 or similar tube without a lot of overlap, they’re prone to shearing in the direction of the uneven load. If you’re gonna do it anyways, make sure your layer lines are perpendicular to the elevator’s direction of motion to give it a fighting chance. The center blocks don’t matter as much. 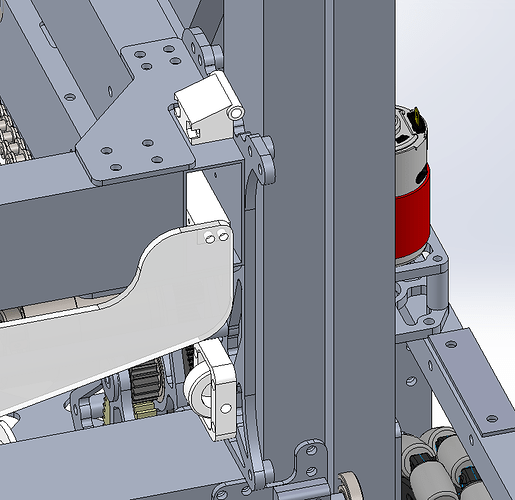 Capture816×791 73.6 KB
This is a close-up of the carriage, i only have a really broken assembly so the bearings aren’t actually there (sorry about that), there’s supposed to be bearings coming on both sides of that top white block, out of the small spacers attached to the big aluminum plate, and one inside that white “wheel” down there. All the white block parts you can see here attached to the carriage (except for the thin plate which is polycarbonate) were initially PLA prints that got replaced with aluminum, and the wheel was replaced with a piece of plastic we turned to size on the lathe
1 Like
Andrew_L September 22, 2020, 6:58pm #7

If you make a part designed to be aluminum out of a weaker plastic, you’re gonna have a bad time. Learned this the hard way a few years back.

I’ve seen printed bearing blocks done successfully before because those blocks were designed to be made on a printer using plastics and they worked well enough.

I want to emphasize something else here along with what Andrew said - if you are printing off parts 1:1 what the design was for an aluminum part, you’re probably going to have a bad time. Additionally, doing this is really ignoring the benefits of 3D printing. If you 3D print a part that you can otherwise probably get machined out of aluminum relatively quickly, are you really gaining anything worthwhile by printing? Design your 3D printed parts to take advantage of additive manufacturing - add strength by adding material and geometry which would otherwise be difficult to get machined. If that fails, then you need to rethink your material (3D printed or otherwise).

It’s kind of like when teams first start making sheetmetal parts - if you aren’t taking advantage of the strengthening techniques sheetmetal fabrication has to offer, what is the point of using sheetmetal instead of getting some plate and tubing routed at your shop?

Along with the part design itself, keep in mind that construction techniques and assembly techniques also play into strength - IE tabbed construction + epoxy or glue for laser cut baltic birch plywood.

On another note, PLA is an awful material for FRC parts that experience high loads. Polycarbonate or Nylon (preferably glass fiber filled for both) are the best at taking impact and in turn, more suitable for an elevator application.

if you are printing off parts 1:1 what the design was for an aluminum part, you’re probably going to have a bad time

I’ll do you one better: copying anything 1:1 from a different design without consideration of the differences is not a great idea 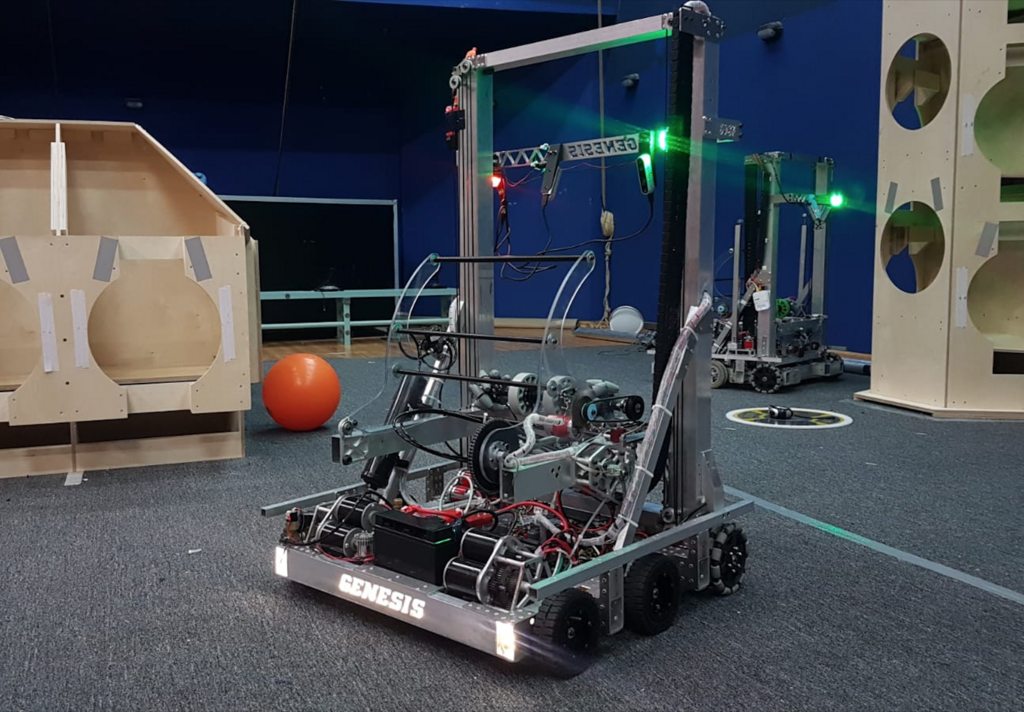 If you 3D print a part that you can otherwise probably get machined out of aluminum relatively quickly, are you really gaining anything worthwhile by printing?

Yeah… The issue is that our team has access to a 3d printer. It does not have access to a milling machine. We were ecstatic to find an online laser cutter (sendcutsend.com), but have not found a similar source for inexpensive machined 3d parts.

Elevator Bearing Kit for assembling a mechanism which allows two pieces of rectangular tubing (or t-slot extrusion) to slide in relation to each other in a linear motion.

Made of black anodized aluminum.

You don’t need 3D parts for elevator blocks, you can actually do an elevator entirely with 2D parts that can be laser cut 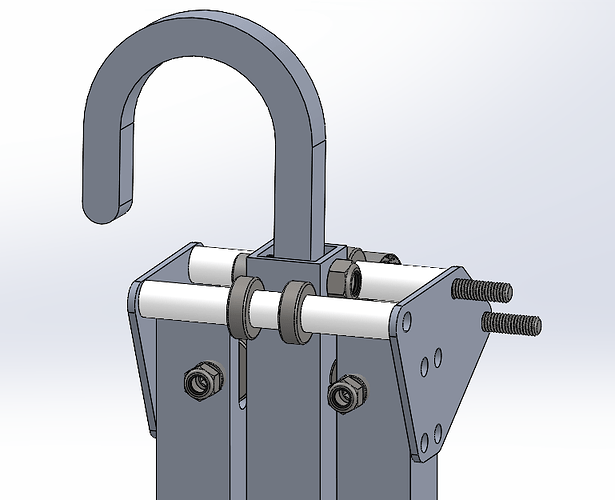 but have not found a similar source for inexpensive machined 3d parts.

The “inexpensive” part is probably what’s tripping you up. So, let’s see if you think you can pull off a couple of things…

On another note, PLA is an awful material for FRC parts that experience high loads. Polycarbonate or Nylon (preferably glass fiber filled for both) are the best at taking impact and in turn, more suitable for an elevator application. 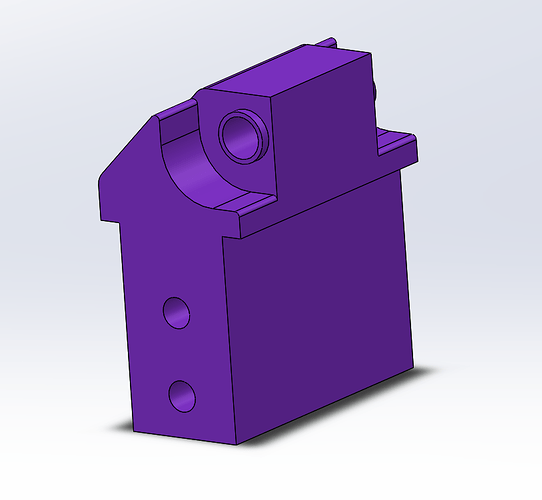 I was thinking more like a piece that goes all the way around an upright with bearings on all 4 sides, sort-of like what was in that Youtube video I linked above. Of course, now I’m skeptical that his parts are going to stay intact. But, that guy bills himself as an ‘industrial engineer,’ so maybe he’s done the math to get it to work with PLA.

I think the takeaway is basically “no, don’t do that.”

Neat. Glad I could be of use!

I was actually looking into elevator bearings this morning, so I already had the tab open.

Nice coincidence of the day, I suppose.

The issue is that our team has access to a 3d printer. It does not have access to a milling machine.

That’s not the issue.

The issue is that you took a design for one material and blindly applied it to another.

900’s 2019 elevator used 3D printed bearing blocks (as did 125’s 2018 one cuz I emailed Brando for the design :p) and 323’s telescoping arm used printed blocks as well. Both these systems were used to climb.

Fun fact about 323 at their second event we were intentionally failing climbs on the practice field to identify issues. We must have dropped off hab 3 upside down 2 dozen times. The printed parts didn’t break… 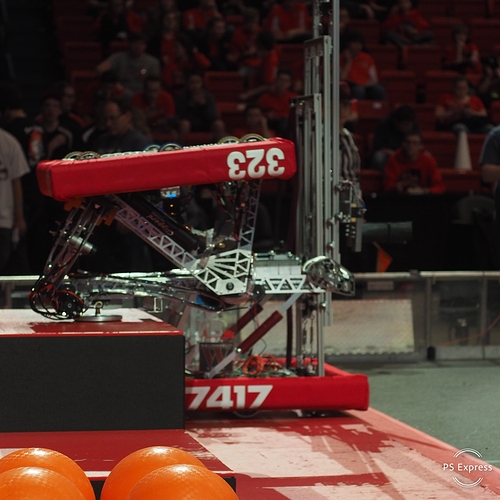 Understanding your materials and the way they are used is important.

Not high impact? Please tell that to my sideways elevator: https://photos.app.goo.gl/StiJeVPS3Va5nitp9

Considering we blew up most the bearings on the elevator at some point I’m gunna guess PLA wouldn’t have help up.

Unsure what advantage PLA bearing blocks have at all? Probably not much lighter than a greyt style elevator. Seems like a step in the wrong direction in terms of robust robot design.