This is a continuation from the conversation about 3D printed pulleys in the “2020 Summer? Swerve” Thread. I want to know how you are pushing your High-performance printer to get every ounce of performance out of it and what has gone wrong for you.

131 used many printed pulleys made from Markforged Onyx material. Some of our smallest pulleys had issues.

The intake system showed that yielding was the first level of failure with the melting being the second. In once case where we had it happen on the practice field, we managed to stop before everything was melted and we could see teeth rolled over. With the motor shafts in place, there were not many wall thicknesses that made up the pulley teeth and that may have contributed.

What infill % and how many wall layers were used? Also what was the tooth count on the pulley? Curious as I plan to experiment some with 3D printed Onyx pulleys.

We printed with 16 teeth, GT2-3mm.
Here is the geometry of the part: 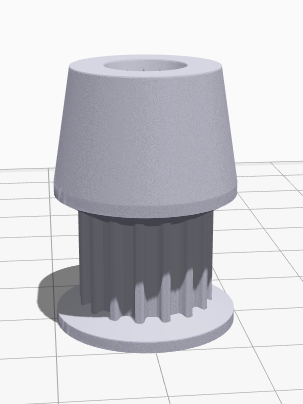 .
Here is a cross-section of the part in the middle of the pulley: 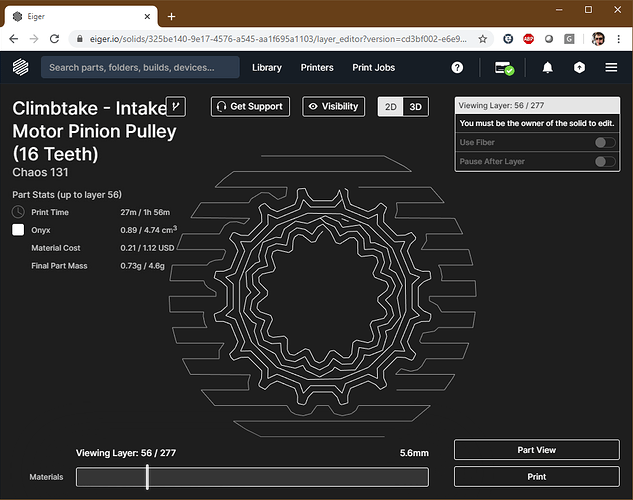 Try to ignore the support structure around the teeth when visualizing the pattern.

Triangle infill (other settings have no impact because it is 100% wall layers in the middle.
4 roofs and floors
4 walls

I never had a problem with the falcon spline because the part had a lot of engagement with the profile near the outside of the shaft.

1425 3D printed many onyx pulleys for our robot this year. To avoid the problem you’re seeing here, we never 3D printed any pinions and all of those remained aluminum/steel.

In addition to that, we never used a gt2 belt reduction off of a high power motor like a neo/falcon because the belt would easily slip due to the small teeth.

We never used belt reductions for our falcons but I would be very nervous about printing that internal spline as the falcons have a crazy amount of torque and there isn’t much material supporting the pulley.

A couple of things we found about printing HTD pulleys that might alleviate frustration.

There is a few things that have come to mind.

4926 used Onyx pulleys on our drivetrain. The hex started to strip after some driver practice on some of them but we just replaced them. Didn’t use them for a full season for obvious reasons but they were fine for our first comp.

Threading Onyx works really well as long as you take certain precautions.
3 dia thread length minimum. When tapping IT IS A MUST THAT YOU COOL THE TAP WITH WATER OR ALCOHOL. Onyx has a terrible thermal friction issue and if you don’t cool the tap, the threads will get destroyed from the heat even if you do it by hand. They can’t be made much tighter then nut driver tight but this method holds our azimuths and drive motors in place, swerve modules onto the frame, the bevel gear on the wheel, wheel bearing caps in place, etc.

I’m just curious, but why not the normal tapping fluid?

Definitely play with adjusting the tooth geometry.
On our swerve the azimuth is 1:1, 38 tooth HTD with 180 degree wrap. No matter how tight we made the belt, it always slipped too easy. We scratched our heads for a long time then someone had the bright idea to check tooth engagement. Turns out that the male pulley tooth was slightly too big which meant the female was too narrow. this caused the belt to EVER SO SLIGHTLY ride high in its groove. A couple of clicks in CAD and much better.

When did you discover this? My team was asked if we could help replicate your modules for another team, and ended up making some extras to use in the 2019 season, and we had this issue as well. We never fully investigated it, but my suspicion was how we changed the geometry of the setup (we moved the azimuth a little closer to the module, so the angle in which the belt engaged increased due to the suspension, increasing slip).

Hmm…Good question about the tapping fluid. I prefer it in this instance because:

I don’t want the oily stuff left behind.
I desire the better cooling effect (lower boiling temperature of water and alcohol). This is probably the main scientific reason.
I have more water laying round to fill a cup with and dip the tap in it.
Another mentor prefers the alcohol because “Its just wrong it put water on a tap”.

I’m not the CAD guy, but I believe we discovered the tooth issue end of 2017 maybe? Next question is does the CAD that’s out there have said change. I don’t know that part. Even though this made a difference, we still slip belts occasionally. This was fixed this year by putting the encoder on the other side of the belt. Now we don’t notice the azimuth slipping. We also make our azimuth belts REALLY tight.

Also watch out for the Thunderhex slip issue.

Thanks for the reply!

the cad we replicated was I believe based off of your 2018 version, however this past season we actually designed new modules from scratch, adding things such as the encoder part you mentioned. (linked below)

Hi everyone! Over this past summer and fall, my team (2090) decided to work on designing our own swerve drive modules. 2019 was the first season we decided to use swerve, however the ones we used were partially designed in season, and had a few large issues. so we went back to the drawing board, and designed new ones from the ground up. So here it is: [IMG_1404 (1)] As you can tell, these modules were influenced by the designs of 2910, 1323, 33, etc. we did make some larger changes however …

Even at 100% fill, printed plastic is porous. If you print vacuum canister end caps you have to spray them with Flex Seal in order to build any vacuum.

By hoop stress are you referring to a press fit? While I am not surprised that 3d printed plastic would give in that situation, how did you go about the process of making the gear not slip?

A press fit does cause hoop stress and we make the parts so the press is just a bit more than a strong person can force on by hand. But the hoop stress I’m referring to is the outward force from trying to spin the hex shaft in the hex bore. If you’ve ever broken a socket trying to remove a stuck bolt, that’s the force I’m talking about. A layer of carbon fiber helps stop that.

Adding carbon fiber is what we did to make the slipping better. It didn’t make it go away completely. Under harsh conditions it still would slip.

Don’t have any experience with Onyx most of our HTD 5 are HIPS and we don’t have a high end printer either (2 Chirons we bought at $400 each) but the pulleys work nice. Make sure you got the extrusion right especially over extrusion is bad as then the “valleys” in the teeth become too small. We have not tried them with Neos yet but we have occasionally stalled Cims with them. We also used ABS and PETG and on one occasion Nylon 910. As for interfacing with the shaft we print a slightly taller key way and take a 1/8 in key down to 2mm on one side so you got a 2x3.2mm key We print solid - that means enough perimeters to have a solid part. On bigger pulleys we insert holes or spokes to save plastic 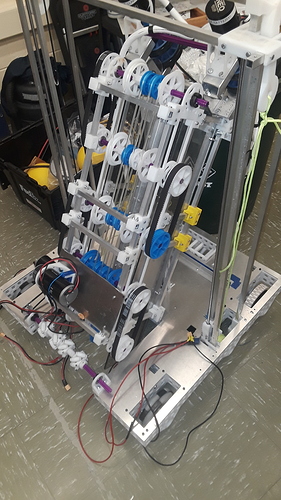 This years robot was only run in the shop because for obvious reasons we did not to compete a single time. But we have been printing HTD5 successfully for a few years now