Our offseason project was the 4th iteration of a differential swerve drive. It competed at GRC offseason event as a dozer bot. It wasn’t exactly effective at anything except maybe defense, but it also didn’t have any drivetrain mechanical issues. The design uses four SA030XPO type bearings, 1 bevel gear set, a spur gear differential and 2 NEO motors per module. Gear ratios are 14:88 then 54:14 then 1:3 bevel gears into a 3.5” wheel. We might try smaller wheels or increase the 88 tooth gear as it’s a little too fast.

The CAD is a bit of a mess because the design started in Creo, then moved to Fusion and ended in Onshape. We are testing software for next year. 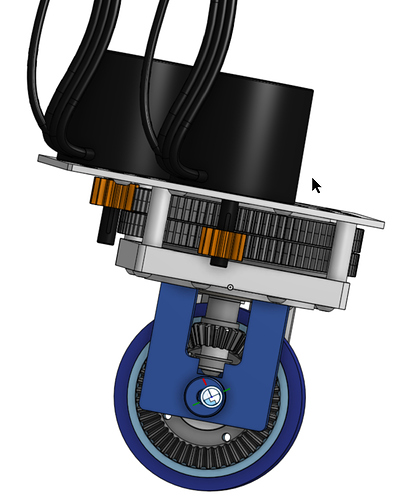 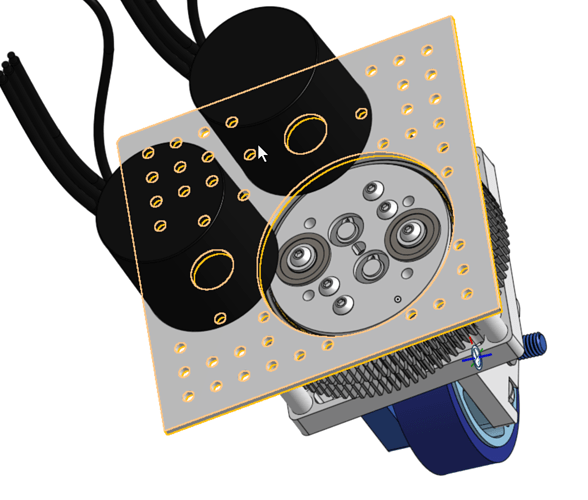 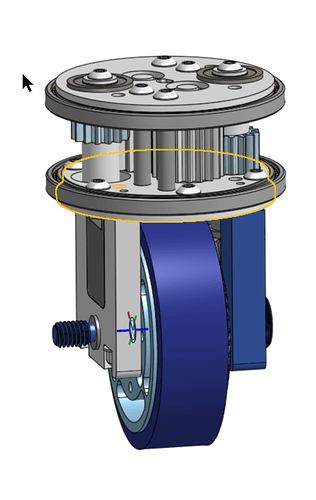 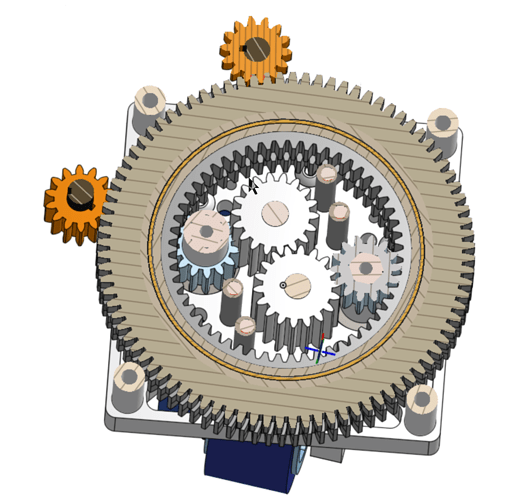 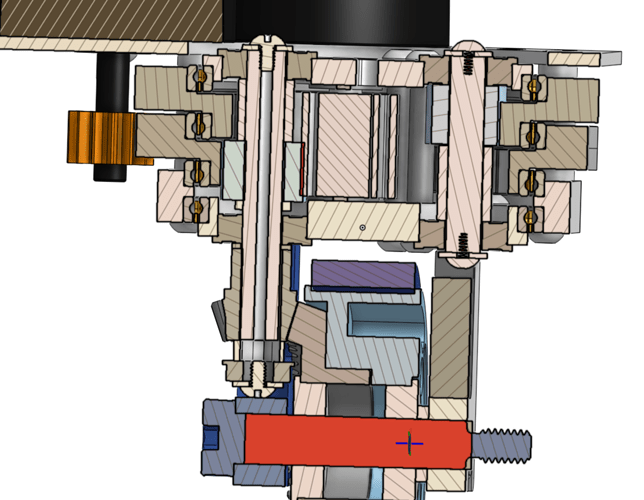 Come on man, give us video of it working

No. It means instead of a drive motor and a steering motor, the module utilizes two motors in a mechanical differential; driving the motors in opposite directions drives the wheel, while driving them in the same direction steers it.

So does a differential serve allow the drive train to use the power from both of the motors whilst driving instead of the traditional one motor driving setup?

Precisely! The drawback is the complexity of controlling it; it’s even more difficult than a traditional swerve, as you can imagine. I only know of one team that’s run one in competition (1706).

If it competed at GRC, this should be it:

1706 here, we actually broke the Differential and made it a traditional swerve before Huston last year. We did compete at Stl regional and Smoky with differential serve. We got it to work, but had issues with tuning the wheel rotation at low speeds. Just not enough torque at that low of speed to make it work well with a fully loaded robot. We saw really good results till we got above about 75lbs.

This is actually insane. Watching this little guy play defense is crazy.

Out of curiosity, are you running field centric control with this swerve? From these videos it looks like you are using robot centric instead.

This is actually insane. Watching this little guy play defense is crazy.

Fun: Watching them: Yes, Driving against them: No (Match 22 of GRC)

When we went over to their pit and they told us that they were going to be using this tiny little robot to play defense I didn’t know how effective it would be. They were fast and difficult to push and that’s all you need for a defense bot. It was pretty effective. It looked like match 22 was the only match where they played all defense so we were lucky enough to be the target…

They would have been our second pick, but it 4329 recommended 1706’s B Team to us. I wasn’t actively scouting at GRC so I went with what they said.

We use the AndyMark swerve modules but are thinking about trying differential swerve during the 2020 season. There’s still lots of research to be done if we are going to try it.

This is super cool. You can really see the power in the drivetrain.

It looks like the internal ring gear and the outer gear are one piece. How did you manufacture these?

Glad to see it running

Like mecanums, zero* diff swerves have ever played on Einstein

*Some liberties taken with this number.

There was a game in 2015? I thought we all j just agreed not to compete.

"Like mecanums, zero* diff swerves have ever played on Einstein

*Some liberties taken with this number." @AdamHeard