I am currently trying to finish up a presentation for my team on 469’s shooter from 2013 however I’m struggling to find any concrete details or pictures to show instead of running off a weird angle picture I find on google. If you could post anything you know that would be super useful.

Is there something specific about the shooter you want to learn about?

You can also look through Dan Ernst’s flikr albums.

Feel free to post any specific questions you have, and I’ll be happy to answer (from memory, documentation was not our strong suit).

Here’s a good shot of the top. Standard Home Depot bucket hopper, feeds into a pneumatic wheel, around a 180 degree arc and shoots back out the front. Not sure of the motor and gearing though 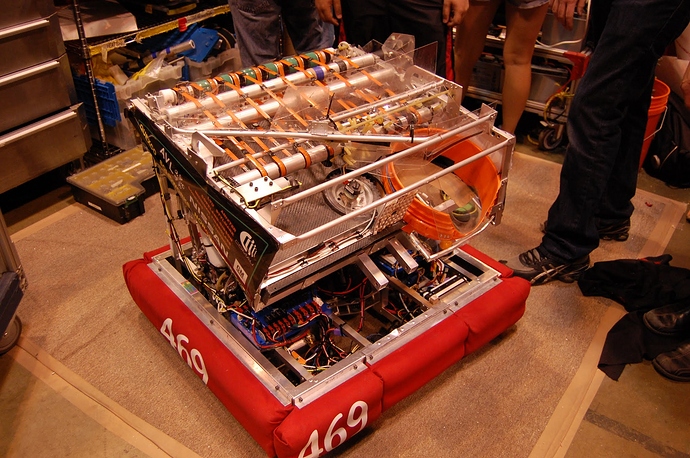 Not sure of the motor and gearing though

I am just looking for pictures or cad files or just information on how their design process works. Anything will help!

In terms of design process, ours was very, very similar to 148. JVN has written a white paper about it here: https://www.robowranglers148.com/uploads/1/0/5/4/10542658/engineering_design_process_for_robotics.pdf

Mechanism wise, what Mike posted is pretty much it. The conveyor would drop the disks into a cut-down Home Depot bucket. An air cylinder would push the bottom disk on the stack into the flywheel, which would immediately fire the disk on contact. There was a small spring-loaded tab keeping the disks from accidentally sliding into the shooter, so it took a small amount of force to get the disk past the tab to actually fire. This picture gives a better view of the cylinder: https://www.flickr.com/photos/danielernst/8608306034/in/album-72157633137068422/

The shooter shell was made out of 2 custom carbon fiber pieces manufactured by a sponsor for us, riveted together.

I heard you guys had a way to flip disks that were upside down. Is this true and if so how did you do it?

I also just heard on CD that instead of flipping them, upside down ones were just rejected when they made that turn around the top of the robot. Or were upside down ones just shot out as duds through the shooter?

We did play around with a tweak to the flap at the top of the vertical conveyor that would’ve self-righted disks. Right-side-up disks would get knocked forward by the flap, but upside down disks would slide through a slot on the flap and go up the human player ramp (where they would be right side up) and slide back down onto the open top conveyor. Unfortunately this wasn’t 100% and more prone to jamming so it never went on the competition robot.

We did make sure that nothing would jam with upside-down disks, so if one did make it into the bucket, it would just shoot out as a dud. If we noticed the upside-down disk in time, we could reverse the open-top conveyor to drop the disk, but that was a manually controlled action.

This was super helpful thanks!

Not related to the shooter, but something I’ve never been able to figure out - how the heck did the conveyor system to get the discs from the floor to the shooter work?

The integration of the different subsystems on this robot astounded me back in Archimedes 2013, and I still don’t understand how it all worked to this day.

Not 469 and pardon the poor quality video, but we had this system set up to flip disks.

This is super cool, thanks for sharing. I’m remembering this for future games.

706 Cyberhawks also had a system to flip any frisbees that they picked up from the ground. I’m pretty sure it was a passive system as the frisbee ran on the conveyor belt past that curved arm that would flip only the upside down ones.

This video shows it working around the 1 minute mark:

One last question did you guys cad your whole robot and if so what software do you use?

We did, in Solidworks.

uhhhhhh thought of one more thing

what kind of machines did you have to make ur parts?

We had a manual bridgeport mill and lathe, plus the typical assortment of drill presses and bandsaws. Mostly everything was designed around those two machines. We occasionally had some one-off parts that were outsourced, such as the carbon fiber shooter.

Not related to the shooter, but something I’ve never been able to figure out - how the heck did the conveyor system to get the discs from the floor to the shooter work?

i think I have a prototype video lying around somewhere, I’ll post again here if I can dig it up. It was a combination of a spring-loaded roller and a poly-belt conveyor that deflected enough to allow the disk to make the bend from horizontal to vertical.