My name is Guy, and I’m a mentor at #frc4744 Ninjas from Israel. I’m writing on behalf of the team. We’ve decided to publicly reveal a part of a strategy method we used this season. We hope that by revealing the method we will help more non-top-tier teams like us to create better-than-previous robots and use their already existing robots more effectively, as happened to us this season. Although it was a post-covid season and with a team of only 12 students, the team has managed to create one of the best robots in the history of the team.

A month before the Kickoff we conducted a meeting revolving around the strategy making method. The method, proved effective, can be summarized by the followings:

Behind those points stands a deep method that helps, among others, to determine the level of the team and to analyze what can help or prevent us from controlling the game resources. We will be happy to help teams that will reach us to get to the depth of the method.

The method, previously explained, helped the team to think on some alternative strategies that rarely seen in play this year: 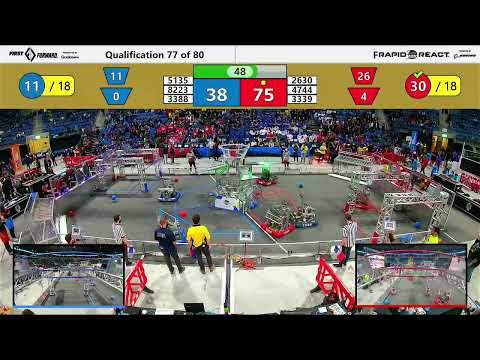 Drawings of the optical field of view and dead-zones can be found at the end of the post.

We will be happy to assist teams that will reach us about the strategies, or to deepen their understanding on the method and process.

Also, full drawings of the optical fields of view and dead-zones are available down below for anyone to use, just keep the team’s logo for credit for the work.

**Optical analysis of fields of view and dead-zones, created by #frc4744 ** 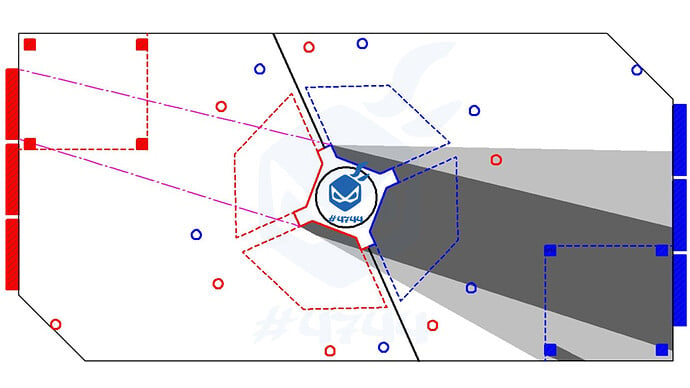 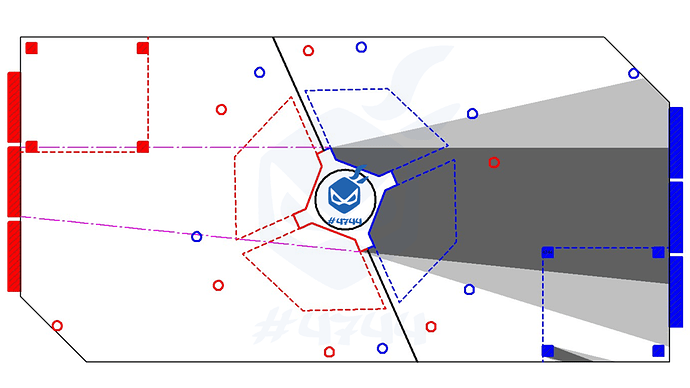 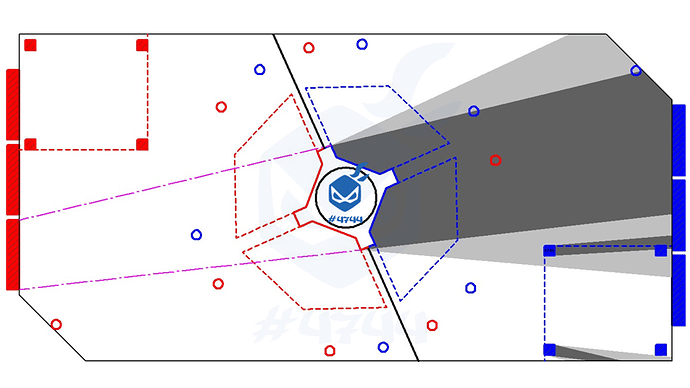 Very well thought out framing for strategy! Its really useful to see your bot placing the opposing balls into the dead zones and having them stay dead!

Thanks!
In my opinion, this video really shows the effectiveness and potential of the strategy.
Honestly, the opposing alliance had really good offensive robots, and our scouters estimated their ball count to be 22-25, thus reaching the ball amount needed for the RP.
With this strategy their ball count was only 12, without us playing regular defense that is susceptible to fouls and damage for the robots.
It may not be enough to stop the high-tier robots from getting the RP, but may come in handy in the Playoffs, as a way to slow the opponent alliance and make the crucial point difference.

Interesting. I believe some teams have received a penalty under G404 (blue box part b) because there were four opposing cargo in their hangar when they started climbing before 30s. See G404 and Ball Entropy @ CVR QF2-1.

Absolutely right!
This is one of the deeper insights my team reached.
The alliance may climb only in the last 30 sec of the match, or make sure their climb isn’t restricting more than 3 balls under G404.
By the way, there is no restriction for climbing with 2 opposing balls on the robot, taking them completely out of the game.
Thanks for the heads-up for any team who might want to implement it!

Balls right against the driver’s station wall are also invisible…
A really skilled human player can indicate where balls are, assuming anyone is actually paying attention

You are right.
We didn’t add this to the list (and also the dead-zones created by the opposite hangar) because it may decrease the cycle time for the opponent alliance, rather than increase it, having the opposite effect.
Your alliance wall is also quite of a dead-zone (mostly from the middle station to the left towards the hanger).

The human players, cameras and auto-ball-targeting make it harder for the strategy, but from our drive team experience - even when you have cameras and a human player who can signal, it is still hard to drive the robot correctly.