This looks similar to a lot of swerves I have seen in the past. I have a couple questions for you.

First of all, thank you for the feedback!


This company sells beveled gears and x-contact bearings. If you want to go through the headache, you can get the bearings cheaper on Alibaba by RFQing. I’d recommend these beveled gears and that bearing for turning instead of the current setup. What’s driving you to pioneer your own swerve vs. just using a COTS module?

A belt in the azimuth of a swerve is a far different application than the side of a west coast. Don’t let that one failure scare you away from belts, they are lighter and cheaper and an excellent way to transfer power.

Another useful way to capture shafts is to use a flanged bearing and turn down the end of the hex shaft. I think this would be appropriate on the bevel gear shaft, probably not the wheel shaft.

I am interested in what the specific gear selections are, if you don’t mind.

Any possibility seeing your work in the fall at RAGE or CAGE???

Another useful way to capture shafts is to use a flanged bearing and turn down the end of the hex shaft. I think this would be appropriate on the bevel gear shaft, probably not the wheel shaft.

For the wheel shaft we just use a button head bolt on each end to capture the shaft between the two bearings (the grabcad model shows a long through-bolt in this location, but the actual modules just tap the ends of the shaft and install individual bolts in each end).

Peter, I don’t know yet. We may build this single module as a control test bed and if there is success and continued interest maybe! We’ll see. Thanks for commenting!

The first stage belt reduction is 12:30 and the second stage gear reduction inside the module is 28:66. The azimuth gears are 1:1 since that keeps the vex integrated encoder 1:1 as well which I have heard is very useful. All the reduction for the azimuth motor will be in the versaplanatery stages before the encoder.

Team 4926 has a Onyx One so we are pretty set there. We agree with @Gdeaver that the design experience and transition through to “making it work” is invaluable. If we were committed to using it for a competition season maybe we would go COTS, but since we are not, we are exploring this route.

Thank you for your comments to our student designer on this!

I think I misunderstood you when you asked why I used belts for the azimuth stage. I thought u meant the drive but I looked up what azimuth meant and realized you meant the turning of the module. My bad!

The main reason for gears was just that it was easy to find one (I guess that’s not a good reason). I need whatever I use to transmit power to have a large surface area so side loads on the swivel pod won’t bend the coaxial shaft. The larger surface area in contact with the mounting plates helps keep that from happening. That’s also why I have the large thrust bearing. However, I’ll look into how I can integrate belts into that stage instead. I have also heard belts have less backlash which is important in swerve.

I’ll look into those bearings as well. Thanks!

Excited to see you guys with are going for a swerve, can’t wait to see it.

Wonderful Design, I love how simple it is. One question I have is, I don’t see an absolute encoder anywhere, would your plan be to just zero the modules every match? If so, I highly recommend using the absolute encoders, that way it takes away from forgetting about zeroing them every match.

Thanks! The vex integrated encoder is attached to the versaplanatery gearbox’s final output. It has both absolute and relative encoder settings and it is geared 1:1 with the module.

Also, to be clear, I was not asking why you were designing your own to discourage you. Designing a swerve is an excellent design challenge, and one I went through as a student not long ago. Keep working at it. I do encourage you to use the Onyx One more. It’s powerful.

Could you post a sectional analysis view of the drive shaft/what is supporting it? I’m concerned that the drive shaft could bend if the module hits something. 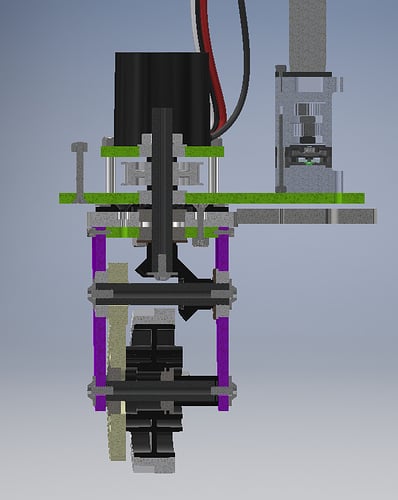 Here’s a little diagram in case my explanation didn’t make sense. I plan on making a career out of my graphic design skills 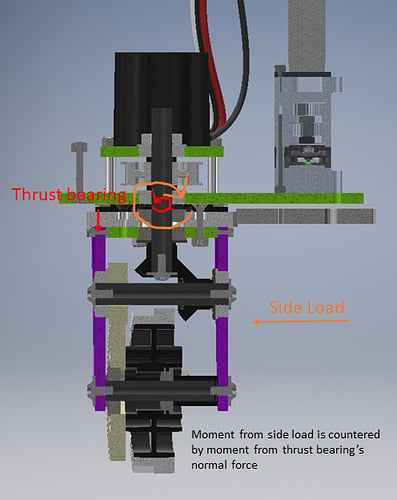 I’m looking into using belts to control the module’s azimuth and my main question is: Would this kind of application of belts require a tensioning system? Normally in WCDs, belt tensioning is important but I am not sure if this would be necessary for rotating a module.

Would this kind of application of belts require a tensioning system?

If you get the center to center distance correct it should not need a tensioning system. Our MK1 and MK2 modules do not have tensioners on the steering belt.

Yeah it’s your call really based on how good you see your tolerances can be. We have slots in our drive rails so we can adjust tension as needed.

Does your slotting system work well? I am already planning on doing that with the drive belts and might do it with this turning belt as well since I doubt our tolerances are as good as 2910’s.