After an unfortunate end to our season, 6672 Fusion Corps would like to present our robot, PARSEC, to you all!

We played at the Plano district competition (FIT) and ended up as the #2 seed going into alliance selection, picking 5414 Pearadox and 7321 Aguila Robotica as our first and second picks. We ended up as finalists, losing to 148, 118 and 7119. Thank you to everyone we got to play with and against! Despite the circumstances, it was a great season. 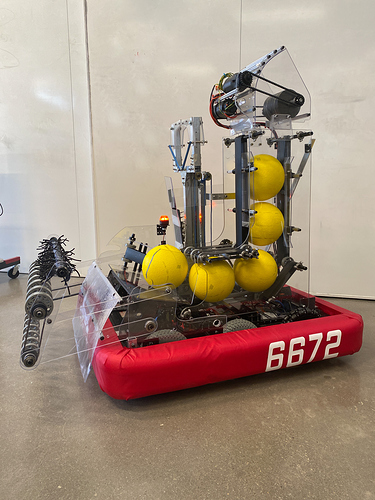 This year we got a CNC router. Due to a couple of unfortunate circumstances, we ended up not getting it running until week 3 of build season. We cut polycarbonate first, and since we were comfortable with it, we used polycarbonate sheeting as our primary construction method. CAD was done in Onshape, CAM was done in Fusion 360. Our goal this season was to make a robot that was as simple as possible, while fulfilling our goals of high shooting and a consistent climb.

Drivetrain
We used the kitbot drivetrain with a couple of upgrades - 4 falcon 500s geared 12.75:1 with 4 8 inch pneumatic tires and 2 8 inch dualie omni wheels. With this setup we had very little center drop which kept the robot very stable.

Intake and Hopper Mechanisms
We had a full width intake run by a Falcon 500, geared 3:1. The intake is on a four bar that fell forward during autonomous. We thought about adding the ability to articulate it but ultimately did not see a need. The shield on the intake prevented balls from going under our bumpers, even when moving at relatively fast speeds. The middle wheel is larger to speed balls up as they go through the intake and make sure there are no jams. The top shaft had the “car wash” (not pictured), which was comprised of string glued to the hex shaft, acting like a three inch wheel. The purpose of the car wash is two fold. First, to slow balls down so they would not shoot over the robot, which we found could happen when prototyping, and second, to act as a wheel when spinning, but as a shaft when not spinning. If we had a three inch wheel, we would not be able to easily intake from the loading station. The carwash was one of the parts of the robot that won the Xerox Creativity Award at the Plano competition.

The goals of the hopper were twofold: to sort the full width of balls into a single file line and to do so using as little length of the robot as possible (in order to give more room to the feeder mechanism. The first goal was accomplished using a polyurethane belt, powered by a 775 pro. To hit the second goal, we made the bottom of the hopper as steep as possible, meaning we did not need the length of other designs to keep the balls in the robot. A cool part of the hopper is it can rotate forward to give access to the electronics underneath and allow the pit crew to swap the battery between matches. (thank you to 4481 Team Rembrandts and their build thread for the inspiration for the hopper) 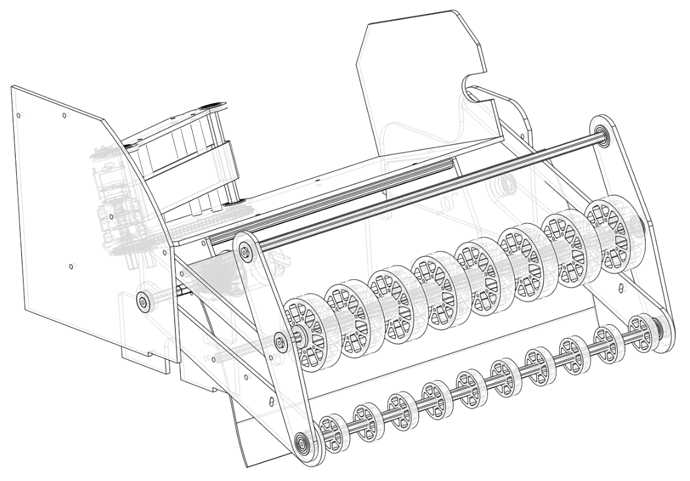 Feeder and Shooter Mechanisms
The feeder mechanism takes power cells from the hopper up to the shooter and holds up to four power cells during the match. It uses a combination of 2 inch flex wheels, polyurethane belts, 3d printed crowned rollers and polycarbonate belt supports to do this. It is run off of a single Falcon 500 geared 5:1, using a gear mesh to invert the rotational direction between the top and bottom belt systems and #35 chain to transfer that rotational motion. The feeder mechanism uses two beam brake sensors to sense ball position. One at the front, on the angled piece of polycarbonate, senses whether a ball is ready to be taken into the system, and another is at the top to know when a ball is ready to be shot. When the bottom beam break is triggered, the feeder moves the belts a specified amount, run by a PID. If the top beam break is triggered, the feeder will not move until the robot is shooting.

The shooter mechanism uses two falcon 500s connected by chain to two fairlane rollers. We used the space coast products fairlane hubs to connect the fairlanes to the thunderhex shaft and had two inches of compression on the power cell. The falcon 500s are geared with a 22:18 up-duction. We put the falcons in that location for a couple of reasons. First, it isolated their wiring (which with Falcon 500 CAN wiring is especially essential) from the very fast fairlanes. Second, it helped us stay in frame perimeter with where the feeder is positioned on the robot. And third, it allowed us to quickly swap the gear ratios with different sprockets and chains. (Bonus: if we ever got to the turret it would have been easier to setup the wiring in this configuration.) Fun fact about the feeder: the entire feeder and all of its supports could rotate backward with the removal of two bolts for easy access to the electronics. 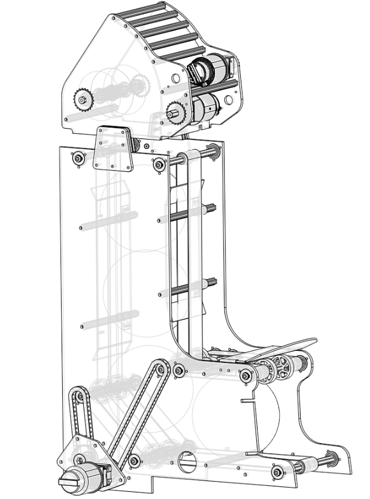 Climber
Unfortunately, we did not CAD this mechanism so I don’t have any clean pictures of it. We used three standard drawer slides, rigged cascade to get our hook on the bar. The climber used two motors (one Falcon 500 and one Neo), geared differently, to accomplish the “up” and “down” motions of the climber. The “up” motor one extended the drawer slides and was geared for speed, and the “down motor” was connected directly to the hook and pulled the robot into the air. We had two designs of the hook, one of which can be seen in the robot picture above and in the reveal video (which we did not use in competition). Both locked onto the generator switch passively and could not be taken off without human intervention. The second climber hook, which used four “tabs” , was the other part of the robot that won the Xerox Creativity Award. 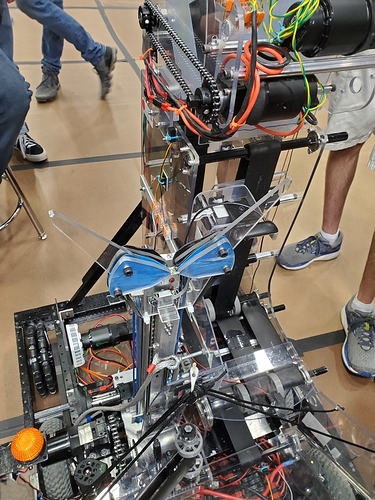 If you want to read more about our robot, here is our engineering notebook! With the abrupt end to the season it was not completed, but it has a lot more discussion about the mechanisms and our game analysis.
6672 2020 Engineering Notebook.pdf (5.5 MB)

It was a great 2020 season. If you have any questions I would be happy to answer them.
J Rehagen

Wow y’all’s robot looks like a polycarbonate version of ours! Everything from the four bar intake to the funnel to the shooter. The only difference was the climber. We used two giant pnuematics cylinders instead.

Thanks for sharing 6672, you all have been one of the up and coming teams in Texas and this year’s robot from you all was the best yet in my opinion. Great job!

I love the polycarbonate, and this robot is a perfect example of a KOP chassis done exactly right. Great work on your design and build!

The use of the KoP chassis and the polycarb(such a big fan of that) was really stellar. Amazing work and that robot looks amazing!