Team 6925 is excited to announce that we are joining the #openalliance for the upcoming Charged Up 2023 game! Our team is relatively new to the FRC scene only becoming involved with FIRST for the first time back in 2018. We originally started as a VEX team and competed in VEX until 2017. Our primary (and only sponsor per their rules) is our school, Woodward Academy.

This is our first time doing an open build season, but I think it could be beneficial to us in the form of teaching us about better building practices and better documentation, as well as other teams in the form of sharing our process openly and honestly.

Goals for the Season:

Me and some other members of my robotics team were passed down an independent study from a former member which was a barebones concept for a T-shirt cannon robot. Containing 3 barrels that are all fed by one larger 150psi tank, many issues arose however the largest was its limited capability as far as shots fired before the tank would need to be refilled. We could maybe get off 2 shots before we would have to refill the tank. Wanting to have a working T-shirt cannon robot, some of the people on …

The post above was a very early brainstorm of what our T-shirt cannon could be. That quickly turned into a whole project, and we went from idea to final in about 2 months. The pictures below are the final product. 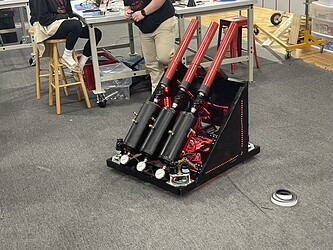 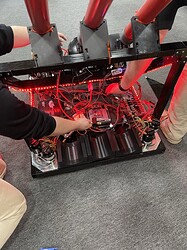 Truss:
First up, we purchased a 10x10 truss structure branded to our school so it can be used for both Robotics competitions, expos, and demos for any school function or team who requests it. This is something the team expressed interest in last year after attending competition and seeing other teams with this type of structure.

Second Husky:
Secondly we were debating buying the road cases from Omega Case like everyone else seems to be doing. This was mostly inspired by the very detailed 4414 pit write-up. One of our mentors vetoed this because they would have to ship from California and they felt as if it wouldn’t be the wisest. Instead we found this Husky and purchased it from our local Home Depot. This has worked well enough for us as we can store extra parts for the robot in the side cabinet on the left, as well as extra drawers and table space for our many tools, batteries, battery chargers, and a monitor. This allows our old husky (the one on the right of the pit) to be utilized for mostly table space as well as more robot parts and tools. 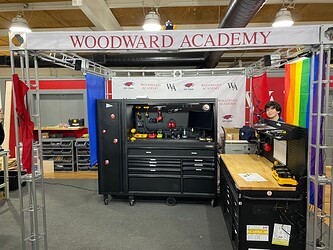 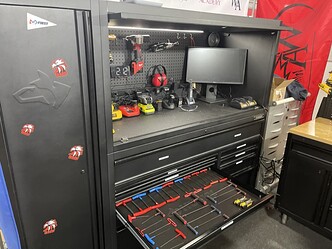 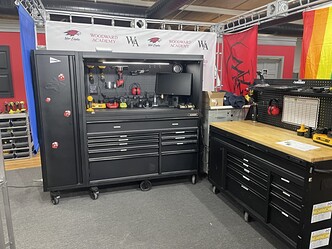 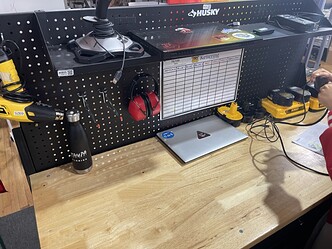 We decided it would be a good idea to use SDS MK4 swerve modules on it in order to get extra practice with swerve before the season as it is our plan to run the MK4i’s.

Really cool project! Just one note - if you’re using SDS tread (or really any kind of tread), be very careful driving the swerve around on gymnasium floors and such, as it could easily leave marks and residue.

So far we’ve only driven it on FRC carpet and smooth(ish) concrete. It left pretty bad marks on the concrete so we drove it less aggressively and it seemed to calm the marks down a bit.

We are currently using the blue nitrile tread from SDS (which is notorious for the wear and marks), but we think if/when we switch to the newer black neoprene from them it’ll help immensely. (we’re going to use the neoprene for the season and if we have spares they’ll get allocated to the t-shirt cannon).

From our experience using both, the black neoprene leaves more marks as the blue nitrile tends to degrade itself while the neoprene just degrades the surface it’s driving on. Our carpets got destroyed even more with the neoprene than the nitrile, but our neoprene treads lasted longer.

(Forgot to link in the first post, linking it here)

Hello y’all! We attended kickoff for the PCH district at Georgia Tech this past weekend, and are super excited to play CHARGED UP this year! We met at our lab after kickoff and outlined our needs and wants for the upcoming season:

(crude CAD on the field) 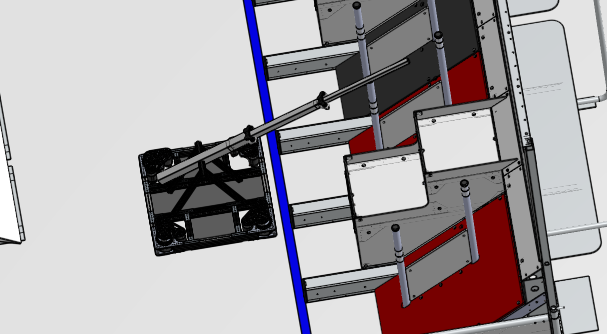 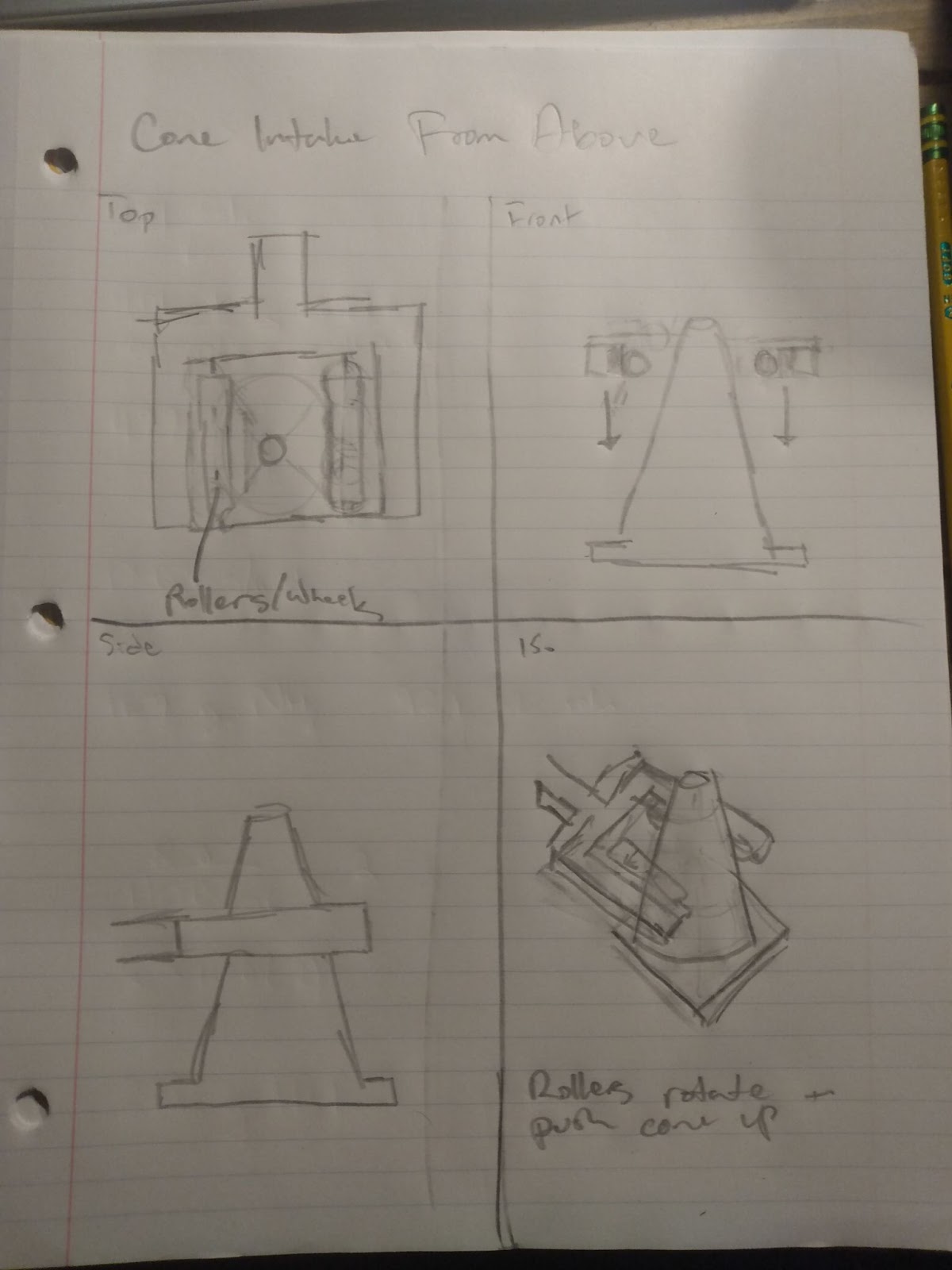 Touch It Own It

Stick inside cones (if a cone it tipped over) 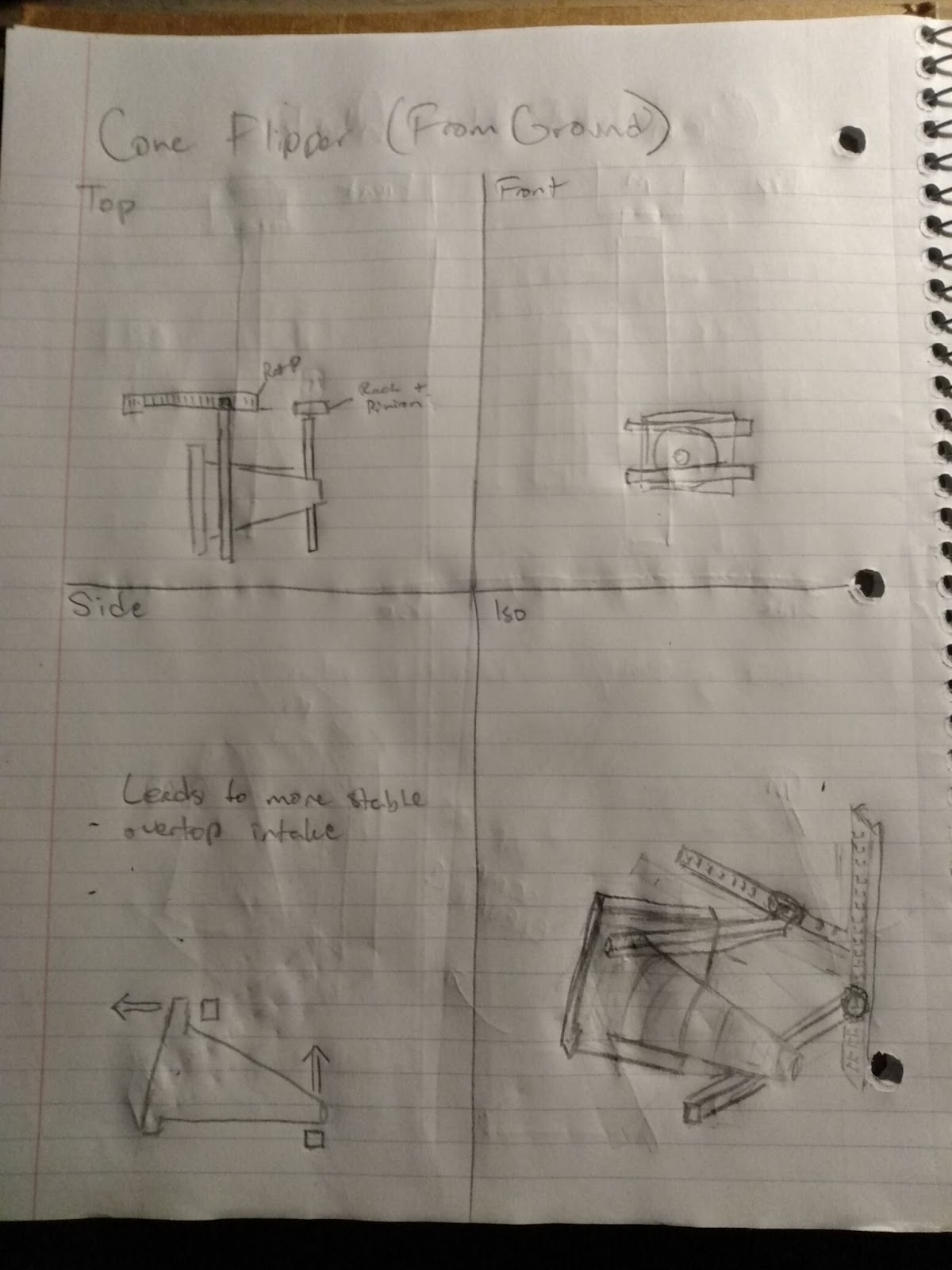 Its been a successful couple of days, we have some solid ideas already down on paper and in CAD, which we will only be working to improving as well as iterating on in the prototype phase. This hopefully is just the start of some awesome ideas! I will be updating this as frequently as possible, but you know stuff could get hectic. Thanks for reading!

-Alex
(everyone puts gifs, so i did ahah)

Happy week three everyone! It’s been a hectic few weeks but that’s build season for you… 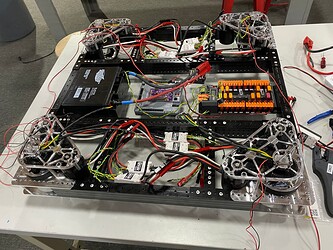 Thanks for reading, hope the best for everyone as build season continues!
-Alex 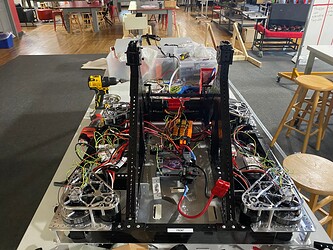 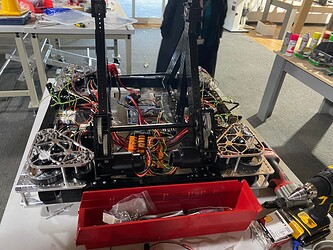 The bot is coming along nicely, we are right on schedule. The electrical board will probably be finished by the end of our meeting today, and the linear slider and intake assembly will continue as planned.

It will be a big improvement to finish early, with PLENTY of time for iteration, programming, and driver practice.

Elevator:
The elevator was complete and attached to the bot, it stays static without power due to the ratio which is what we wanted. There was an issue with spacing the gearbox to drive the elevator that required a shaft change (we just cut the shaft shorter to fit it) only took about 15 mins to fix. 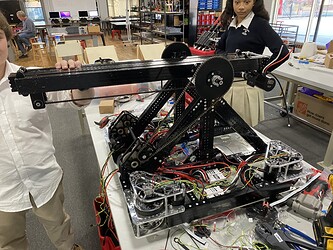 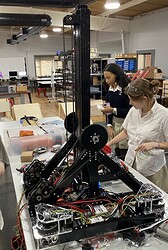 Intake:
The prototype was finalized and we continued the fabrication of the final intake. I will attach videos of the intake working on cubes and cones at our desired angle.
Cube Video
Cone Video

Electrical:
The board wasn’t quite completed today. Its mainly just cable management and routing left. We had a hiccup with our encoders so we had to re-solder all 4 of them, but at least they’re correct now…