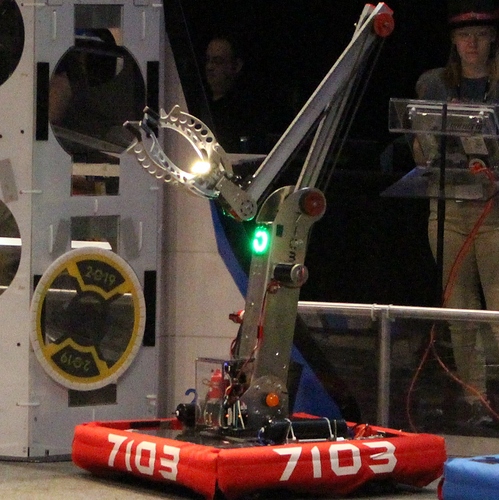 The design: A three-jointed articulating arm mounted on a 360° turret with a servo-actuated claw as the manipulator.

There are a lot of things that we’d do differently if we built another robot like this or for this challenge, but our team is proud of the robot that we’ve made. It isn’t the most competitively viable design, but the amount of learning and experience that our entire team gained from such an ambitious robot it made it invaluable.

We competed at the Northern Lights and Wisconsin Regionals. Let me know any questions you may have!

What motivated you to build a 3-joint arm on a turret? What advantages did you see over a more traditional 2-joint arm or elevator?

Or perhaps even a double-jointed arm on an elevator on a turret?

What motivated you to build a 3-joint arm on a turret? What advantages did you see over a more traditional 2-joint arm or elevator?

As far as building a two-joint arm vs a three joint arm, after some initial discussion, math, and CAD sketching, we felt that we needed three joints for the range of motion that we desired (with as big of a claw as we have, it would be quite difficult to control if it wasn’t wristed). Since the joint design is effectively the same for all three, extending to additional joints isn’t particularly challenging, provided there is room for them.
We chose to use a turret because we wanted to remove as much of the responsibility from the drivetrain operator as possible. Looking at our strategy and downfalls from last year, we spent far more time slowly re-orienting the drivetrain than we’d like. A turret allowed us to use vision to easily line up our scoring mechanism independently from the drivetrain.

We built an elevator last year, and we all felt that we wanted to do something different to gain experience. We definitely discussed improving our existing elevator, but in the end we all felt strongly that we didn’t want to make a second elevator.

Or perhaps even a double-jointed arm on an elevator on a turret?

While I was definitely a fan of that design when I saw it, we didn’t think of it, and it would have been more complicated. We would have had to develop an elevator in addition to an arm, and had a bigger, heavier mechanism on our turret.
We were actually able to get our arm down to 29.9lbs so we could carry it in outside of our bag at competitions.

We expected our design to challenge us, and that it did. Even though it wasn’t as competitive as we’d like, we are happy that our robot was functional.