Releasing a design I developed and built for a 3D printed beltbox. Intended use is to replace a NEO/Falcon with a 775 as the steering motor on the Swerve Drive Specialties Mk2 module for BOM reasons by leveraging BOM exempt speed controllers (Talon SRX/Victor SPX) while maintaining near zero backlash in the steering powetrain, but it’s got uses beyond that. 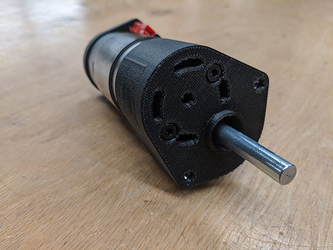 Reduction is 12:36 with a 41T GT3 3mm belt, which gives a free speed around 6000 RPM, in the same range as a NEO or Falcon. 36T pulley is 3D printed on Markforged, along with the housing. Final weight is 1.13 lbs without the speed controller, and using a stock AndyMark DeCIMate shaft. Weight (and cost) can be reduced by making the shaft custom from 3/8" Aluminum Hex.

Assuming a 775 from FIRST Choice and an exempt speed controller, the BOM cost of the unit to replace a Falcon or NEO+SparkMax comes out to $35 including the 775Connect. If using a custom aluminum output shaft, that drops to $22.

Very nice concept! Any thought given to tensioning the belts? Something like the offset pairs of mounting holes on GRT’s beltboxes might be nice in case the belts start to stretch.

I’d be worried about the pulley rounding out on a drivetrain application.

It’s for steering, not motive power and is the 1st stage in the gear train (followed by a 15:45 gear stage and 10:60 belt stage on the Mk2 module) so it really shouldn’t be under much load at all. The steering motors on the Swerve Drive Specialties modules run at a pretty low current. In an application where it would be more heavily loaded I’d agree. However, if it is an issue the 3D printed pulley could easily be swapped out for a flangeless metal one and hex broached.

Very nice concept! Any thought given to tensioning the belts? Something like the offset pairs of mounting holes on GRT’s beltboxes might be nice in case the belts start to stretch.

Belts don’t really stretch (one of their advantages over chain), and in this case as noted above, it won’t be under much load. GRT’s belt designs were done so they could adjust the tension on the belt during initial install, not to adjust over the season. For this application I chose to go nominal exact center distance, but since it’s 3D printed it would be easy to put some center adder in and re-print if there were issues.

My mistake, I thought you were using this for the drive. That should be fine.