A Brief History of My Experience with Rivet Drill Attachments (a thread nobody asked for, but got anyway)

What the title says.

I first learned of electric drill riveters during the 2016 season. These are tools that attach to a standard electric hand drill that allow the user to drive pop rivets. Typically they are compatible with 3/32", 1/8", 5/32", and 3/16" rivets, making them very useful for FRC. Although they are beat out in speed by pneumatic riveters, they don’t need compressed air and are significantly cheaper.

Things were not always so bullish for drill rivet attachments. Back in 2016, only a bare handful of these tools were available, and they retailed for $80 to $130 depending on the source - Astro and Bryke were pretty much the only sellers on Amazon or eBay that sold them. However, in 2017, I came across what we will call “Rev. 1” of the Chinese clone rivet drills for a mere $24.65 shipped on eBay: 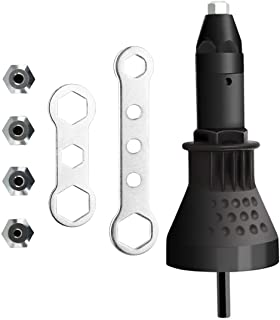 The characteristics of the Rev. 1 included a large plastic housing, a metal nozzle holder, and a short hex shoulder just past the grip to help disassembly. The dotted pattern on the “grip” of the housing was also common to this first revision. It came with a nozzle change wrench, a housing disassembly wrench, and 4 nozzles. The disassembly wrench could also be used as a handle when driving 3/16" steel-mandrel rivets, but this was somewhat clunky. 1072 used one of these for the 2018 season to drive almost all the rivets on the robot. However, at our second competition that year, it failed. Disassembly soon showed that the culprit was a melted M8 drive screw, rendering the unit useless. 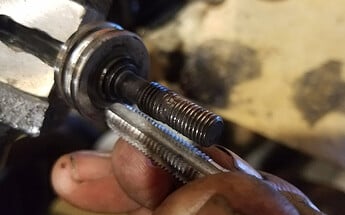 Lesson learned: don’t operate these at the “3” speed of a Dewalt drill, and take it apart and oil it occasionally. We also learned that hands would get sore using it after several minutes, because opposing the driving torque by gripping the smoother housing put a strain on hands. Disassembly was made a pain because some units did not come with a wrench large enough to take the whole nozzle off, so when it jammed, you would need to hunt down a large adjustable wrench to take the nozzle holder off and clear whatever wreckage was in the jaws.

I replaced this unit with China’s newest invention: The Rev. 2. 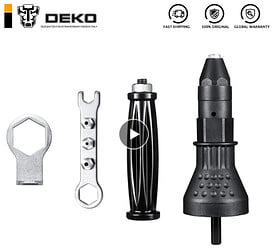 The Rev. 2 was very similar to the Rev. 1 in design, but can be identified by the longer hex shoulder after the grip. The cost had also dropped to $21 shipped. This model upgraded the M8 leadscrew into an M10 one. This appeared to reduce wear on the screw. Some models came with a nice rubber handle that would screw into the large wrench, allowing the user to use the disassembly wrench as an actual handle instead of an improvised one. I sought one of these out to replace the Rev 1 that 1072 had, and it functioned for a long time after that. 1072 acquired a pneumatic riveter in 2019, so the rivet drill saw less use, but it was taken to competitions for use in the pits. Last I checked it was still operational (circa 2022) but it definitely jammed more often than it did when it was new. 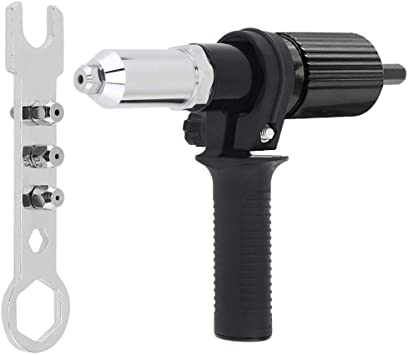 I bought one of these for 6619 in early 2022 for $16.75 shipped, also from eBay. The all-metal housing and dedicated operation handle were clear improvements to the old design. The cost of rivet drill attachments had also been steadily dropping for the last several years. However, the biggest improvement was the addition of a spare set of jaws, stored inside the handle itself. This meant that as the riveter experienced wear or tear, you had minimum one chance to swap out the jaws to give it new life. Spare parts for these riveters are difficult to come by despite their pervasiveness, so spare jaws can literally double the useable life of the tool. I do have a couple of prospective candidates on order. 6619 used a Rev. 3 for about half the rivets on the robot this season with no issues. Some Rev. 3 have decreased in price to under $15 shipped from eBay. 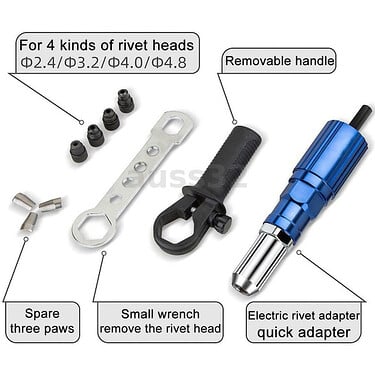 The only difference between Rev. 3A and Rev. 3 is that the nozzles are knurled instead of a hex shape. It also tends to come in blue and looks shinier. There are also variants of Rev. 3 with a slightly different housing casting with a smaller diameter. 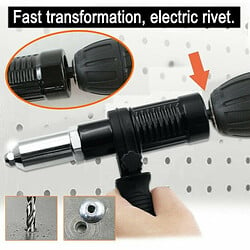 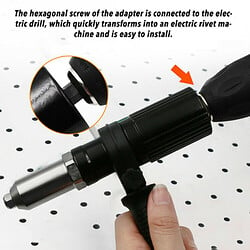 A random image I found of the internals of a Rev 3: 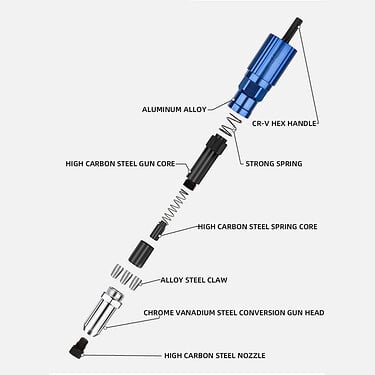 Finally, I’ve been seeing a few Rev. 4 on the market recently: 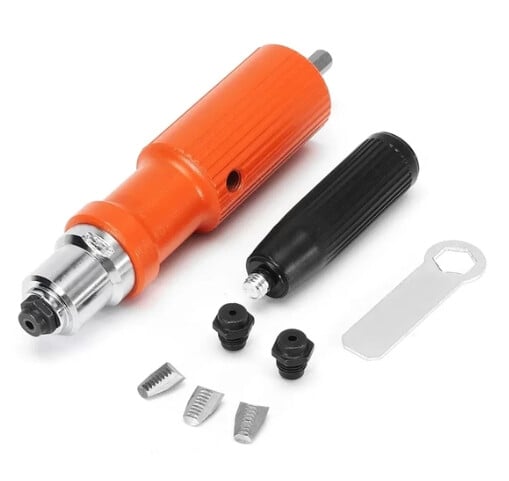 These look like a definite downgrade from Rev. 3. For one, the disassembly wrench is missing, replaced by a nozzle swap-only wrench. This means that to clear a jam you’ll have to go track down a big adjustable wrench and try to fit it on the tiny flat on the nozzle holder. Furthermore, getting rid of the nozzle wrench tapped holes means that the only place to store the nozzles is within the handle with the spare jaws. Repeated removal of the cap on the handle will probably loosen it (it did not feel very premium on Rev. 3) and if it ever comes off accidentally, the spare jaws may be lost. The strange nozzle shape also worries me as they may break compatibility with other riveter jaws. If you’re looking to buy a rivet drill tool, stick with Rev. 3 for now.

I have a Rev. 3A on order right now from Aliexpress for testing, along with a couple of sets of spare jaw candidates. I will update this thread later with information on internals and reparability once those arrive.

I love the adventure here!

Anand, this is the deepest dive into the most inconsequential thing on chief delphi, and that’s really saying something.

Anand, you are so strong and so brave for sharing your story. Your struggle is an inspiration to us all, especially me. I will take this lesson with me wherever I go.

I can only take that as a challenge.

Any chance you can compare these tool attachments to a dedicated electric rivet tool? We just got one and we’re happy with it so far, but we had a bit of sticker shock at the price. Especially because we don’t have any Milwaukee tools so we had to get new batteries and chargers too. An inexpensive add-on to the drills we already have definitely sounds like a more reasonable cost to swallow, as long as functionally they work as well.

Unless someone donates one for me to test I can’t really compare. For the cost I certainly expect those to do better than a $15 Rev. 3 attachment, but you could buy several and just accept that they’ll break every year or two.
AliExpress has them for around $13-15.

Excellent work, we need more of this type of thing on CD.

Yeah, this is cool. More of this please.

We got a rev 1 a while back and we’re quite happy with it - but it also wore out after a season or so. Before we got around to ordering a replacement, we happened to get a donation of a bunch of Milwaukee tools, which included a riveter. The Milwaukee is much nicer - easier to use, smoother operation, and doesn’t take up one of your drills (swapping between drilling holes and riveting, back and forth, can be annoying!). Perhaps one overlooked aspect is also the size. Those drill attachements stick out a fair ways in front of your drill, so they aren’t going to fit into any tight spaces. The Milwaukee is smaller. We’ve been using it for several years now with no problems.

Is it worth the added sticker price? If you can afford it, I would say yes. If it’s too much for your budget, you’ll do just fine with the drill attachements.

Bought one of these this year: M12 Rivet Tool (Tool Only)

Based on bulk rivet purchases and remaining inventory levels, we figure our team drilled out over 1000 rivets this year as we iterated through different designs. This tool puts them in super-fast.

We have 2 and LOVE them

I, too, bought a couple of the Type 1 tools. They work, but its easy to jam them all the way in or out, and the kids lose the parts almost instantly…
I’ll order a type 3 ASAP!
BTW, there’s a Makita clone drill frame that seems to have one of these integrated into it: 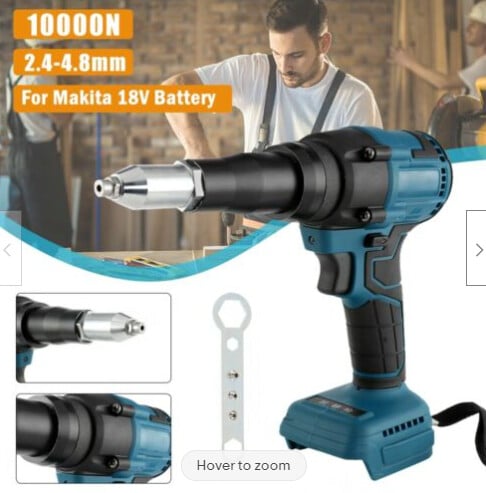 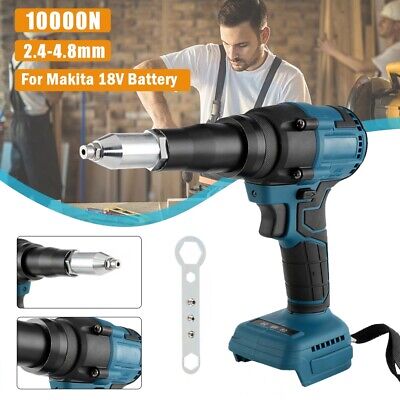 One major difference - the Makita has a rivet mandrel disposal at the back. So you should be able to rivet about 2x as fast and jam less with it than the clone.

Would be nice to see future drill rivets incorporate automatic mandrel ejection somehow, that’s one of the biggest sources of error. But it seems unlikely.

We ordered one of these this year (I am not sure which of your “revisions” it is), but it spontaneously disassembled itself during the first day of use this season and so I returned it and we never replaced it.

Perhaps we’ll try again, soon, based on this new information. Thank you for sharing!

Unfortunate! That looks like a Rev 2, FWIW. There’s always a chance with any of these cheap tools to break randomly, but hopefully it’s rare.

We used this Bryke one for the past couple of years. We haven’t had any issues with it. I love it when a student would rather try hand riveting first.

We bought one of those this year as well, & had the same experience - love it. We debated over whether the cost was worth it, but since we’re doing more frame-and-gusset construction it really was a win. Not only can the students put things together much faster, it produces a more consistent result. It also turns riveting from a not-fun job into one they compete to do. No issues with it so far.

I am a little surprised there are not more and cheaper of these on the market (the 18V ones are especially egregiously priced) but I guess the dedicated battery powered riveter is just a niche market.

I guess the real question is…why DIDN’T I ask for this?

We started using the Harbor Freight pneumatic riveter last year and it was a game changer for us and basically as affordable as the drill versions. Has the added bonus of randomly startling everyone when the compressor kicks on

. Very little hand strength required. Love the info on these since we’ve been talking about adding a drill based one to take to competition where a compressor in the pit would be annoying. We still have all students do at least one one hand rivet before they get to use the powertool version to gain an appreciation for it. I’ve wanted the M12 tool, it’s a nice machine. But since I’ve standardized on Ridgid powertools I really don’t want to have to add on another battery type for charging. I wrote to Ridgid to put in a request for their version.