A look inside an old FTC Power Distribution Module:

For those who are wondering what is inside an old FTC Power Distribution Module, here it is:

The device is made in the USA but the PCB is made by JOVE, a Chinese company.

The total estimated cost is just under $12 in full production.

It wasn’t terrible… after you hot glued down every USB connection point.

The first year of this system and the cell phone controls was not much fun. I second year was okay after you figured out the electronics quirks, but the REV system has been a lot more reliable.

Don’t get me started on hot gluing those… as a CSA at Champs in 17 I ran into a team that was absolutely convinced that the connections they hot glued 6 months ago could not be faulty. Only took them one more match of not moving to try reseating and re-gluing everything.

No.1 issue with that system wasn’t really dodgy USB connections rather the ability of Android and the FTC SDK to handle removal of some/many/all devices then seamlessly come back to operation again in a timely manner. Early FTC SDK versions were utterly atrocious in handling USB device removal often bombing out with some weird errors depending on when the data stream cut out. We made a serial to USB host adapter for NZ teams which worked in with the USB hub controller to detect and manage these disconnections. Hooked the serial port up to VEX Cortex controllers and created a super reliable system.

Really weird choice of USB mini-B on devices though. Never could figure that one out when micro-B had pretty much displaced it in other applications.

Keen to know which PCBA you’re using for $12 though. Got a spread sheet with ALL costs on it? Or maybe that’s just a total for some parts and true production costs aren’t considered.

Funny thing is that we had one FTC robot that played almost 60 matches that year without an electronics failure until lag got them bad at Houston. That one wasn’t hot glued down, but had everything zip tied down firmly and all the wires tied to polycarbonate or running through plastic conduit to keep them off the frame. That robot is still used as a demo robot, with the flywheels cranked up to double whatever the shot height limit was for that game.

But I definitely saw some hot glue jobs as well. And in 2016 (first year for MR electronics), there were a lot of robots that never moved at all.

Most of the problems I see with FTC control systems now seem to be either faulty wiring (which is a team issue), wires getting damaged from poor placement, or (still) wifi interference. I’m hoping that the new REV driver station will help with that if it ever becomes legal for FTC.

Here are the costs to manufacture the whole PCBA: 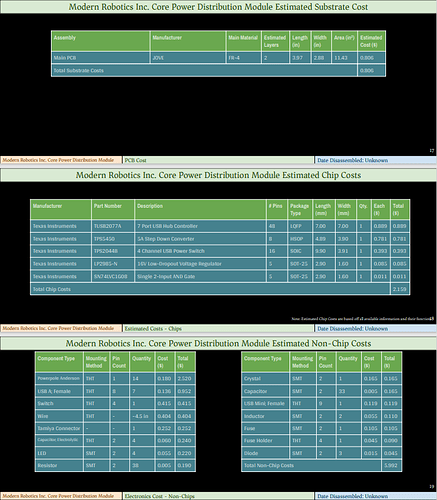 Ah, you mean here’s the raw component costs before PCBA and after all the design work is paid for. I think it’s fair to say the “$12 in full production” misses many expenses that aren’t components such as amortized R&D costs, testing and failures. Also not all USB connectors are created equal and one would hope the MRI sources weren’t the cheapest available.