A Physics Quiz of a different type

Last night, the neighbors came over for a visit, and (somehow) we got on the topic of Relativity. One neighbor, a non-science kind of guy (but very intelligent) wanted to know why you can’t go faster than the speed of light.

My response was that at one end of E=MC^2 you have pure mass, and at the other end you have pure energy. You can’t go past the endpoints. As you go closer to C, M decreases and E increases, since C is decreasing*

OK, he accepted that as reasonable , but in my mind, that’s not right.

So, in one or two sentences, why is there a limit to the speed of light?

**Upper limit on speeds
**According to special relativity, the energy of an object with rest mass m and speed v is given by γmc2, where γ is the Lorentz factor defined above. When v is zero, γ is equal to one, giving rise to the famous E = mc2 formula for mass-energy equivalence. Since the γ factor approaches infinity as v approaches c, it would take an infinite amount of energy to accelerate an object with mass to the speed of light. The speed of light is the upper limit for the speeds of objects with positive rest mass.[31]

More generally, it is normally impossible for information or energy to travel faster than c. One argument for this follows from the counter-intuitive implication of special relativity known as the relativity of simultaneity. If the spatial distance between two events A and B is greater than the time interval between them multiplied by c then there are frames of reference in which A precedes B, others in which B precedes A, and others in which they are simultaneous. As a result, if something were travelling faster than c relative to an inertial frame of reference, it would be travelling backwards in time relative to another frame, and causality would be violated.[Note 4][33] In such a frame of reference, an “effect” could be observed before its “cause”. Such a violation of causality has never been recorded,[15] and would lead to paradoxes such as the tachyonic antitelephone.[34]

A particle accelerator in Europe actually detected what they believe to be partials that can travel faster than the speed of light.

Are you talking about the neutrinos a month or so back? There was a lot of healthy speculation about that. I heard that was finally shown to be false, they got the timing between the start and endpoints wrong. They had used GPS for the timing and their error was something like they had forgot to completely take general relativity into account for calculating the time (the relative time was different because the satellites were moving fast)
Someone please correct me if I’m wrong or show a link or reference if I’m right. I can’t find where I heard that.

I find the Wikipedia explanation pretty good. It should be noted what the gamma factor is (the funny y). The Wikipedia article refers to how it approaches infinity, etc., so it may be helpful to see what it actually is. It often (or almost always) pops up in the math for these types of equations, so they made a variable for it.

Oh, here’s a joke. The tachyon is a hypothetical particle that would move faster than light. So…
The barkeeper says, “Hey, we don’t serve tachyons here,” and a tachyon walks into the bar.

It’s fine to believe something, if you have a good reason for it. Here you just need to be a little more careful adding up the facts. Even the experimenters who published those results are skeptical, and are calling for independent replication of the results. (Wikipedia has a fantastic article on those results and their implications.) I wouldn’t bet on the original results being upheld.

Besides, any application of faster-than-light anything is still firmly within the realm of speculation (or daydreaming)—in other words, I don’t think there’s any good reason to believe “it will be possible to go faster than the speed of light in the future”.

Also, “only a theory” doesn’t really mean what you imply. Wikipedia has a dense article on theories, but the important concept is that “theories are collections of hypotheses that are logically linked together into a coherent explanation of some aspect of reality and which have individually or jointly received some empirical support”. In other words, calling something a theory doesn’t call it into question so much as it indicates that there has been systematic scientific inquiry into the subject.

Aside: 4 citations to Wikipedia in 4 replies? That must be a record. (And it’s not a bad thing.)

I’m no expert mathematician, but I believe Don said he wanted an answer in “one or two sentences”, and nobody has provided anything less than a paragraph related to the subject.

Being a high school student that has not taken physics yet, this question is very interesting, and I would also appreciate a short and concise answer, instead of having to read 4 long paragraphs.

In conclusion, I would very much be interested in a short answer as to WHY it isn’t possible to go faster than the speed of light.

“In order for knowledge to be understandable, it must be accessible. We live in a world today where people don’t want to read long books to learn things. Bring the knowledge to the people, and they will learn it”. - Sal Khan, Khan Academy

Yeah, you’re right on the simplification part.
The Wikipedia article mentioned this, I’ll try to sum it up. 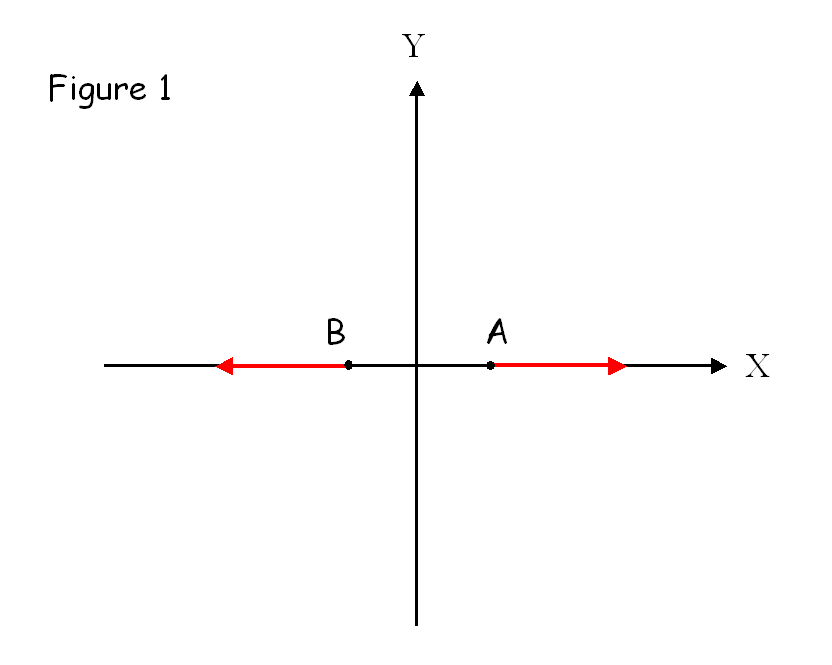 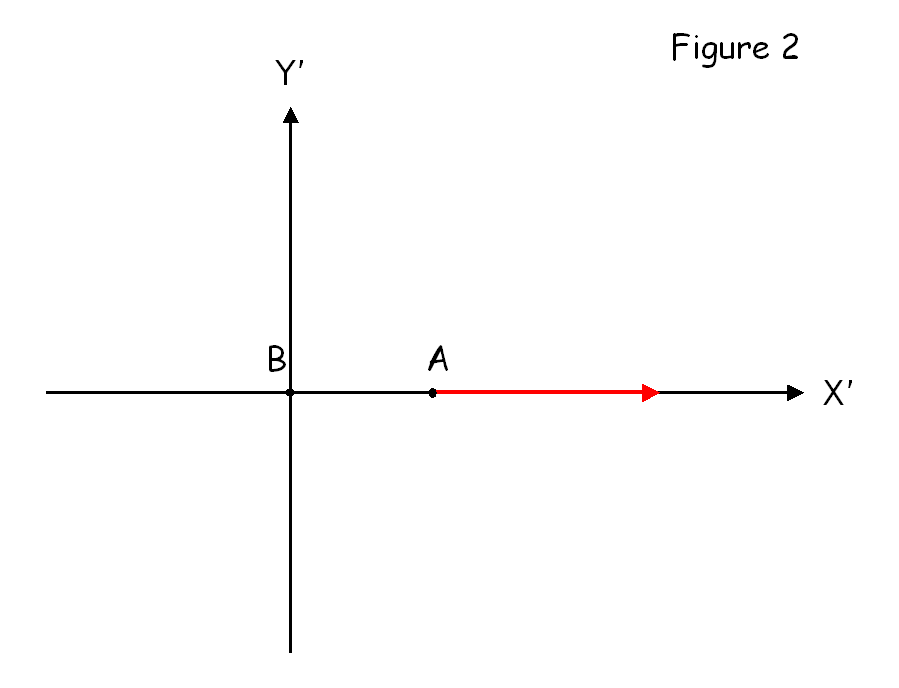 See answers in embedded in red below:

The answer to your question hinges on the same principle as the answer to the question posted here one hour previously.

Wouldn’t it be slightly slower than c because of the air and lens of the flash light. :yikes:

Wouldn’t it be slightly slower than c because of the air and lens of the flash light. :yikes:

I thought Al was in outer space where there is no air.

Still has a flash light with a lens, although I suppose he could remove it.

Of course you still have the glass of the bulb…

Of course you still have the glass of the bulb…

The speed of the light is slower only while it is in the glass. Once it leaves passes through the glass it resumes its normal speed.

I’ll take a stab at your problem, Ether.

System 1 (XY): The relative speed of the two particles is c/2-(-c/2) [speed of A - speed of B], which results in 2*c/2 or c, relative to each other, as viewed from a neutral position.
System 2 (X’Y’): In this case, the system is fixed onto Particle B in the above problem, which is assumed to be moving at -c/2 (from the reference point in System 1’s point of view). The relative speed remains the same, as the motion did not change (if viewed from System 1’s reference point), so observers on Particle B see Particle A leaving at speed c.

Which brings up the question: Do observers on Particle B really see Particle A, or does it just vanish as it moves?

Because all of the math and conclusions about various relativistic phenomena are drawn from these, this is the two sentence answer sought by the OP.

msimon’s original Wikipedia quote basically sums up the theoretical implications of superluminal speeds and why it is generally dismissed as impossible. For more blood and gore, read on.

To Al, because light travels at the same speed (in vacuum) in all reference frames, no matter how fast you are going, light will always emanate from a source you are carrying in all directions at the speed of light. To a stationary observer you are passing, the same is true. This is related to the fact that light has no medium (there is no ether), so an source’s motion cannot be measured relative to anything meaningful. This was observed in the Michelson-Morley experiment and was a driving force behind Einstein’s insight.

The increasing mass concept is something I feel is not quite accurate. It exists to reconcile conceptually whats going on with Newtonian physics. Really, the momentum that is conserved is with respect to a proper velocity (because no one can agree on a common clock anymore), and this screws up all our nice F = ma tools (but F is still dp/dt !). As you go faster and faster, space-time is distorted such that the extra acceleration is accounting for more and more energy. Calculating the Energy of a relativistic particle (again from Lorentz transforms) gives K= (y-1)mc^2, where m is always just the rest mass, and the quickly diverging behavior is due to y as opposed to m getting bigger. E = mc^2 is just a statement about the rest mass of particles, since when v = 0, y = 1, so K = 0. The total energy is E = ymc^2.

Well that was fun.

System 2 (X’Y’): In this case, the system is fixed onto Particle B in the above problem, which is assumed to be moving at -c/2 (from the reference point in System 1’s point of view). The relative speed remains the same, as the motion did not change (if viewed from System 1’s reference point), so observers on Particle B see Particle A leaving at speed c.

Surprisingly, the above answer is not correct. It is the heart of Einstein’s theory of relativity and why it was so profound a discovery that changed the face of physics.

An observer sitting on Particle B (i.e., in reference frame X’Y’) will observe Particle A’s speed to be