The site contracts for Detroit and Houston end in 2020 and I suspect that FIRST HQ is negotiating new offers and contracts at places unknown. I hope that my proposal isn’t too late in the process, but that it might get consideration.

Instead of paying for two separate venues with two different setup and tear down costs, and the added stress of moving and housing staff in two locations in consecutive weeks, FIRST should stage the two championships on consecutive weekends in the same city. The cost savings, including staff travel, likely would pay for any additional facility rental costs (and there might even be savings there.)

Previous analyses posted on CD show that while having two sites benefits a small number of local teams, in general the travel distance and costs for the vast majority of teams are indifferent to the two locations, or in fact a range of other cities in the middle of the U.S. FIRST could target these cities with similar overall travel distance as Detroit and Houston. The city chosen should not have a winter/spring sport use of its large stadium venue (i.e., MLB/NBA) then. It should also be large enough to have sufficient hotel space, so >500,000 population. A prime example is Indianapolis (which is also home to the NCAA offices).

Along with cost savings, FIRST also gains flexibility in how it assigns teams to each Champs. It would no longer need to be a fix geographic basis. FIRST could mix up states/provinces, e.g., Michigan and California at one and Texas/Ontario at the other. It could focus on balance by selecting different districts and groups of regionals. It could focus on what types of awards are emphasized, e.g., all of the Chairman’s at one, and EI at the other. Or it could open up to either random assignment, or some sort of (non monetary) bid basis.

Teams could now open up to more experiences with a wider range of teams. As it stands, California teams will never encounter Michigan teams except in an odd off-season event with two Champs and California still using Regionals. And that can be said about other pairings. We all have joyful stories about meeting and befriending teams from other places that we will now not see under the current format. Let’s try to fix that and save money too!

(PS, I have to credit Glenn Lee with this original idea.)

This is a great idea, assuming we keep the 2champ thing going.

We can also go back to just one championship.

While they’re at it, they can save a ton of cost by renting just one venue for FRC, and not moving an entire robotics competition to a completely different venue for just a couple of matches.

Can we have championship fields in a dome instead of a convention center again please.

You guys are funny thinking FIRST HQ wants your input in things!

Good laughs had by all.

I’d like to add my support for this proposal. FIRST could stand to save a good deal of money doing this, and saving money = a better event (or perhaps, gasp, lowered entry fees)

Selfishly I hope that the post 2020 champs location is no further from Ontario than Indianapolis. Having champs in Detroit last year was amazing for our travel budget.

This is a great idea, assuming we keep the 2champ thing going.

We can also go back to just one championship.

My prediction: Multiple championships isn’t going away. It serves FIRST’s purpose of giving more teams that impressive experience way too well to cut out half the teams that attend champs each year. Instead, I expect we’ll see 3 champs, and then 4 champs over the next ~10 years - including championships hosted outside the US.

Honestly, the only real difference is that a few high-profile teams that wow’d us on webcasts weren’t there to see in person. There were still plenty of other great teams to see and talk to.

I remember someone on our team suggesting this kind of idea at some point, the problem is if you have two champs one after the other a lot of teams will probably attend both (one as participants, one as spectators), which might cause some overpopulation

I would support Indianapolis as a 2021 site, it has about the same setup as St. Louis and would allow FRC to have all matches in the football stadium. It also has a tunnel back to the convention center where the pits could be. 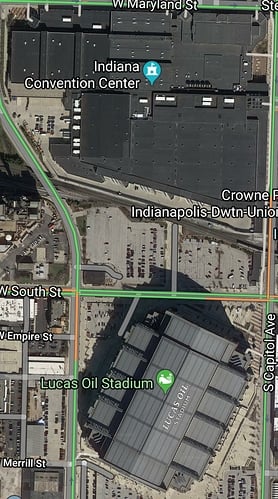 Instead, I expect we’ll see 3 champs, and then 4 champs over the next ~10 years - including championships hosted outside the US.

So im hearing aim for DCMP’s as champs will just be DCMP 2, electric boogaloo, but with more diluted competition than we see now at champs. sounds inspiring, sign me up!

At that point, the name needs to be changed. Calling it a “Robotics Convention” is more up the alley of what that is. Hand out participation medals while we’re at it, I hear the kids love that.

Sounds inspiring to me, more matches for more teams.
If my students got a chance to go to a championship it would blow their minds.

If my students got a chance to go to a championship it would blow their minds.

If you have 4 events called a championship, are they really championships, or just another level in a system without a real championship?

Im not saying it isint inspiring, but it boils down to these just more regional events, which is what the divisions are already. A “Championship” shouldnt feel like a regional event.

Anecdotally, I have always found DCMP to be more inspiring. It actually felt like you earned a spot there and you deserved to be recognized as a top team, and you got treated as such. The production value was higher, the matches were tougher, everything seemed like care was taken to make it “better.” We even met new teams too and got more matches!

So, if you constrain to consecutive weeks at one venue, in theory, the multi-champs issue can go away a bit more easily. Here’s how you do it:

Each team (different regions) has a set of days guaranteed when they will be playing. This will be the same as existing champs. For planning purposes, teams only have to know they’re at the regional for that duration, and will (more than likely) travel home later. Each region plays down to a single winning alliance. All non-winners go home.

There’s one final period when the winners of each region come together to do the festival-of-champions thing to play off toward the single winner. FIRST could maybe front the extra hotel & food & robot storage cost for the top N teams that compete in the final final rounds. Basically it’s the “Einstein tournament” now.

Im not saying it isint inspiring, but it boils down to these just more regional events, which is what the divisions are already. A “Championship” shouldnt feel like a regional event.

Maybe not to someone who has spent years in FRC and been to these events before, but for me and my team (who has never been to a World Champs (Until this year (Dont jinx me pls))), it could be one of those events that you remember for the rest of your life.

For most teams, they aren’t looking for Champs to continuously blow their minds with its size and scale. Most teams don’t even get to go to world champs, let alone on a regular basis. Just the fact that we might be able to spend a week across the country surrounded by hundreds of teams at the largest robotics event we’ve ever attended, that would be incredible enough.

Sadly, FIRST can’t please everyone though.

Maybe not to someone who has spent years in FRC and been to these events before,

Ive gone once. Do I want to go again? Definitely! I made tons of friends and I’d love to see them again. I just didn’t get the same inspiration as I did going to my first DCMP back in 2015. The event itself just didnt feel that special at all and reminded me way too much of a district event.

I would support Indianapolis as a 2021 site, it has about the same setup as St. Louis and would allow FRC to have all matches in the football stadium. It also has a tunnel back to the convention center where the pits could be.

Sadly the tunnel could not be navigated by robots.

So, if you constrain to consecutive weeks at one venue, in theory, the multi-champs issue can go away a bit more easily. Here’s how you do it:

So those winning teams miss another week of school with no notice (that would NOT fly with my team’s school)? What if the team flew in - does everyone have to make sure the airline is willing to move 20-50 plane tickets to a different week with less than 24 hours notice? If the team took a bus in, is the bus company supposed to extend the contract by an extra week with no notice? Is the team supposed to change hotels with no notice, or is the hotel expected to be able to free up those rooms with no notice?

The logistics of asking 4 teams to stick around for an extra week on a Saturday night are not small, and for many (maybe even most) are probably not possible.

Honestly, the only real difference is that a few high-profile teams that wow’d us on webcasts weren’t there to see in person. There were still plenty of other great teams to see and talk to.

#1: That’s not what Richard was talking about. W all understand that there will always be more teams to create a relationship with. The whole point of having a champs at all is to see who is the best, and to have a place/event for teams to create relationships with teams around the world.

#2: With having more and more championships, being the champion of one means a lot less. Having 2/3 of FRC at a championship of their own is more or less the same as having district championships. I’ve heard of the idea that having many teams experiencing a district championship type thing and that will be the extent that most teams will experience. Then having one championship that encompasses the best of the best competing against one another. This would allow teams to still learn from these seminars and still feel accomplished from earning their way to their local championship and also helping to create the competitiveness that worlds used to be known for.

The biggest problem with going to more and more “champs” is that FRC will extend further into the year. It already goes into late April which is pushing college’s dead and finals weeks. If FIRST of to push FRC towards a more FTC Super Regional sort of model that will then funnel into a new World’s Champ comp, it would be best to make the Super Regionals the week(s) and have Champs the week or two afterwards.

Personally, I am a fan of expanding to a Super Regional style of comps. I believe it would allow more teams to compete with teams from similar areas while still being more than just a district or regional event. It’ll help get the best of the best to a new World’s event. Say for example, instead of the top teams from Michigan, Indiana, Ontario, and New England all going to Detroit for their Champs, I’d they all go to a Super Regional and the best of these teams go on to a World’s event, it’ll still give the teams that make it out of District Champs another competition before having them compete against teams from around the world.

TL;DR I think FIRST should expand more then bring back a larger version of FOC