I always love finding the simplest good solution to a given challenge. It usually informs my “what we should have built” for future year’s reference. From using various shot calculators, I could not find a set of velocities at a single given angle to hit the 3 point goal from every accuracy challenge zone. As such, we built a 2-position hood this year, but I was wondering if anyone figured it out.

Is there a way to hit 3’s from every accuracy challenge zone with a single hood angle?

Take a sharp angle relative to the 2D goal and you may be able to hit it. You can try going outside the zone too laterally (I think) to make sure your angle works.

We used a single position shooter and were able to hit the 3 point shot with at least one of the three shots from the farthest zone in the video we submitted. The other two were close. Pretty much lobbing it up there from that furthest spot. We used the 2D goal and ended up getting a score of 42.

Edit: Based on the CAD, the exit angle of the ball would have been around 44 degrees.

It usually informs my “what we should have built”

You mean the W-8 ™ strategy right?

Yeah, green zone is a no-go for us with a non-adjustable hood angle. But we also never intended to shoot from that close last year… and we’re using the same robot.

You can try going outside the zone too laterally (I think) to make sure your angle works.

Need bumpers completely within the zone for shots to count.

We can just barely make 2-point shots from the green zone by nudging the robot to the side as far as possible, but still carefully keeping it in the narrow space available (and using the Power Cells from the 2021 KOP which we only started using last week, brand new balls give such good compression behavior). Same thing with us never designing to shoot from there.

Last years bot had the opposite problem from most other people in the thread, it could only shoot from the first zone. This year we designed a two wheeled shooter that could hit all 4 zones by altering the speeds of the wheels relative to each other.

(Problem is we could only meet once after we finished the bot so we didn’t have time to fix the elevator gearbox which was struggling, added a lot of inconsistencies in feeding)

Is there a picture of this setup somewhere?

I wonder which is easier to implement - a pneumatic 2-position hooded shooter or a two-wheeled shooter?

We did still have to have a different shot speed for each zone to hit 3’s from every accuracy challenge zone. 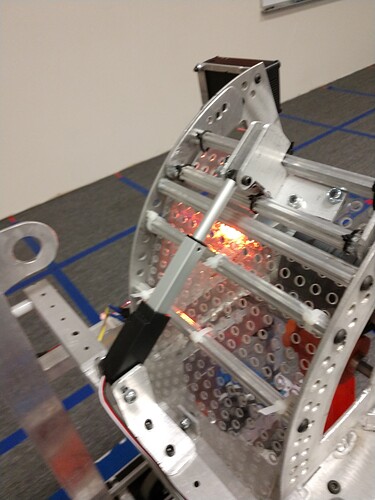 We didn’t have pneumatics, so we cut our hood and used an andymark electric linear actuator. We were able to have one shot from green and one from everywhere else.

We did adjust rpm, but were able to score 45 pts. 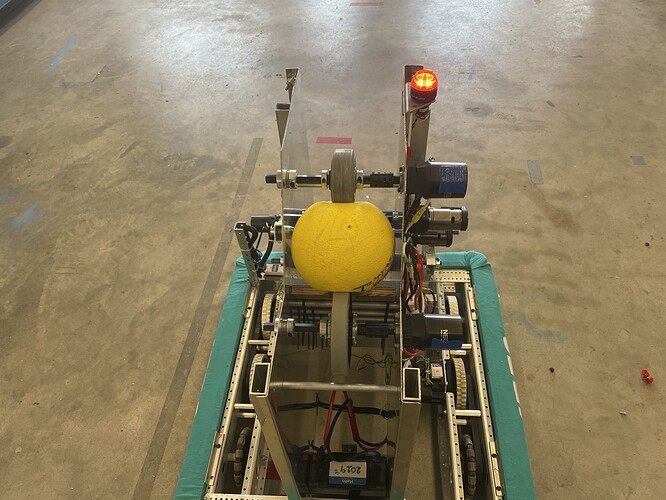 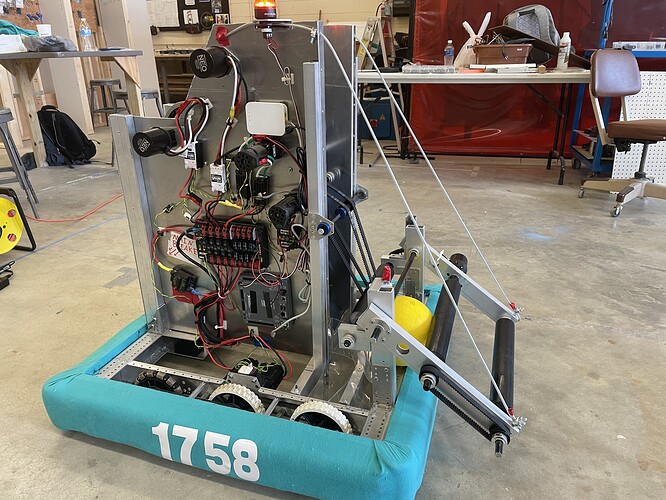 We got all of ours to hit with a set of rpm calculations from our engineering department (thanks Bill!).

Our launcher was designed to shoot from about 25-30 feet away for last year and we had to remove one bar to change the angle. It took a little fine tuning to miss the ceiling on a few shots but after a few tries, or 20, we got all of them in.

you could set it onto a PID loop so that you can control the flywheel rpm to get different distances. we did this with our last two zone.

Bit late to the tread, but we also had some problems with the green zone and a fixed hood.

We managed to get over these with a few adjustments/robot design quirks:

A tad late. But team 3452 got a perfect score with a fixed hood. https://youtu.be/FJCsCeVMvyc all we changed were the RPM speed the wheels shoot at. We used a single Falcon500 direct drive.

We used a large flywheel. Had to maximize that space in the green zone. Not perfect but it got the job done. 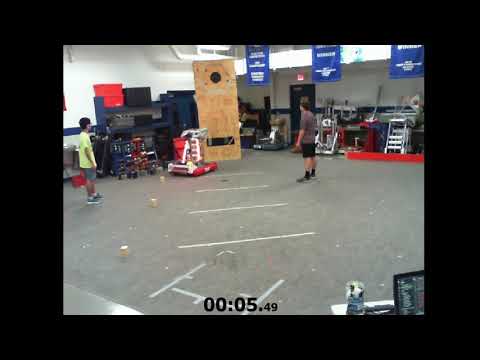 We had a (younger) local team that borrowed our practice space to record their challenges that had a rather interesting fixed shooter with dual horizontal wheels (side-by-side, rather than top-and-bottom). They positioned the shooter angle so it could shoot directly at the target from the closest position (high upward angle), then for the other positions, varied the RPM and hit the target on the far/down side of the shot arc.

It wasn’t terribly accurate (the wheels were direct-driven off of CIM motors, and there was no closed-loop control, vision, or even voltage compensation), but after playing around with their presets a bit, they were able to hit the target (mostly 2pts, but still) fairly consistently from every position. It was probably one of the more impressive “low-tech” shooters I’ve seen in a while, and especially impressive for this particular team to be able to pull off with such success.