Any thoughts or previous experience with using a large (1 gallon) air tank as opposed to using many KOP air tanks for storage? As far as we can find, the volume of air stored on your robot or the size of an air tank is not regulated in any of the Pneumatics rules.

No, there are no regulations about that. But there is a (new) rule this year that says all the pressurized air in your robot needs to come from the onboard compressor.

How long will it take to fill that tank, to the desired pressure?

do you have this much time between matches?

Yes, the time to refill is a concern. We are aware that we can only use the onoard compressor and the thought was to fill the tank prior to the start of the match. We will definitely get some documentation on the output of the air compressor. Thanks for making us think some more.

But there is a (new) rule this year

it’s not entirely new. All air on the robot has always had to come from one and only one legal compressor, powered and controlled by the robot. The only “new” part this year is that the compressor can’t be off-board, it must be on-board. Time to fill is certainly a concern if you have a lot of air storage. Another is weight and space - a lot of the larger tanks are going to be heavier than having several smaller plastic tanks, and as they are larger they can be more difficult to fit into a design. Smaller plastic tanks can be spread out anywhere they fit on the robot, they don’t have to all be clustered in the same location!

My personal feeling after being involved in this for over a decade, is that having a small storage tank on the robot is the way to go. That means, designing the robot to use little air, which you do by using only small pneumatic cylinders. The reason this is beneficial, is that so many weird things happen during competition, you don’t always have much time to refill the tanks. And if something happens that you have to actuate the mechanisms more than planned, there is no way for the compressor to “catch up” if you have a lot of air storage. With only one small tank, the compressor can fill it in time for you to use it again during the match.

But each team has it’s own tolerance level for this stuff.

I know that…but I think we’ll see many teams having to change their approach to pneumatics this year. I think it’s a good change, others probably hate it.

It’s all up to your specific robot’s needs. If you use a lot of large pistons, then the extra air is nice to have. However if you’re running out of weight switching to a smaller tank would give you some room. Just practice with a smaller tank and if you have issues running out of air you can play with how many tanks you have.

Last year our robot went to competition with seven Clippard tanks from Andymark. They weigh .64 of pound each and they all have two hoses that can leak. We competed well in KC, but had leaks the whole time. We wanted to add a mechanism, but were at 115 lbs.

So I went in search of another air tank. Found an automotive air tank designed for those cars that go up and down. 2.5 gallons, 3.1 pounds, expensive at $110, but looks like a million bucks. People remember our robot.

Wasn’t able to find a one-gallon, but this fit. Inspectors made us install it completely as received–even though we didn’t actually use the mounting legs, they’re still on there (facing up). Really glad we did it. Takes about five minutes to fill before a match using a Thomas. 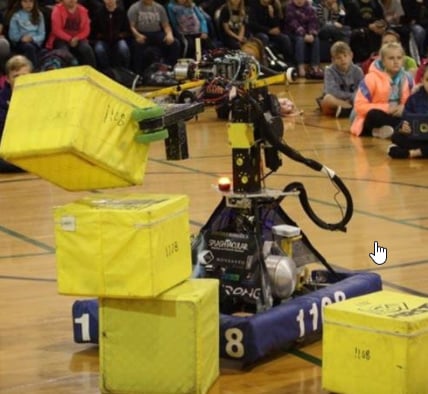 What we have ordered is 6 lbs and yes we had looked at the weight of the smaller tanks. We had the same thoughts of less tanks = less connections = less likely to have leaks. Weight is not going to be an issue for us this year, space will be tight. I am glad you said it only took 5 mins to fill yours. However, we are anxious to get it and test the time it takes using the KOP air compressor.

Did you guys had an onboard air compressors ? if so, did you rely on that compressor to refill or did you found out that just having this tank was enough to handle most of your match?

Last year, with our pneumatic shifter and pneumatic intake (obviously used throughout the whole match) with four black clippard air tanks our compressor turned on once every match about 3/4 of the way through.

Assuming this question is for me…yes, we kept the onboard Thomas–it was already there. We had a 2"dia air cylinder with 24" stroke in the middle of the robot that served both as our elevator and as our end-game lift. Going up and down, it used lots of air.
We don’t empty the tank, but use it down to below 60psi.

Later, for off-season, we decreased it to 1.75 bore and still lifted the 'bot fine, using about 2/3 of the air.

We used a 3 gallon air tank last year with an on board compressor and didn’t have issues airing up in between. Sometimes it was done in queue as well, but even for elims we were okay.

It takes about 7-8 mins to go from 0 to full. After a match we’d be down to around 65-70psi so that would take about 4 mins to refill.
Only issue is we had to have a fan on the compressor or it would get so hot it could melt the pneumatic tubing.

You can see our tank in the pic here: 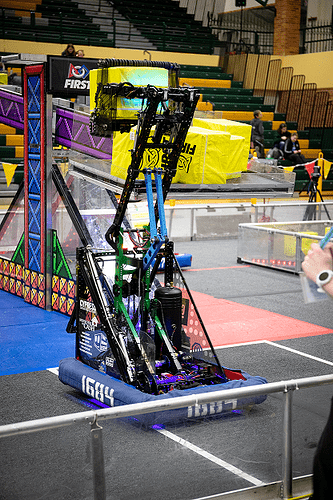 Only issue is we had to have a fan on the compressor or it would get so hot it could melt the pneumatic tubing.

We had that problem on our 2014 practice robot. The tubing ruptured explosively a couple of times. The expanding air coming out the tube cooled the tubing to the extent that we didn’t realize it had been hot; we thought we had faulty tubing and switched to a different batch. We finally mitigated the issue by connecting as many of the high-pressure components directly to the compressor, and putting the first piece of tubing as far away from the compressor as possible on that “Christmas tree”, and checking the temperature every few minutes with an IR thermometer.

Where did you buy your tank?

We got ours from here.