After some investigation it appears that our failures may have been caused by overtightening. The student that assembled the wheels used an impact driver and inspection of the wheels noted heavily deformed or even partially torn out threads in some holes. We do not yet have enough time on the replacement wheels that were assembled with hand tools to be sure that they won’t also back out, but a visual inspection of the fasteners is going to take place after every match this weekend. 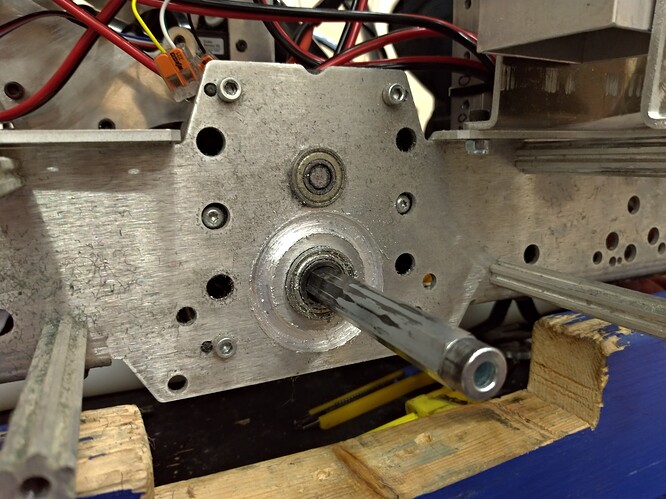 We had this happen during practice at home.

After we found that it had compromised one of the drive rails, we were able to swap that rail out with an old leftover (luckily) and reassemble with old screws (and replacement leftover wheels). This was also lucky – we had a huge bag of screws sitting around and a bunch of lightly-used HiGrips. It did also make us realize that we had out-of-spec hubs, and gave us a chance to replace the partially-worn center wheels before competition, so it wasn’t all bad. The opposite side’s inner rail was starting to show superficial scratches, so we didn’t swap it.

I was initially happy with the screws that came in the kit this year, since they had 1/4" heads, and thus didn’t require a specially-modified 5/16" socket, ground down to clear the pockets in the pulleys. However, after this incident…yeah

We first started driving the chassis around 2/20 for practice/testing on carpet (~2/3 size field), and one side of the robot stopped moving on 3/13. At that point, we had probably done about 15x 1v0 practices (match-length) and 8x 1v1 practices with heavy defense and ramming. The matches immediately before the failure became noticeable were 1v1 with T-boning. Earlier in the day, we had done some full-speed back-and-forth runs across the cable protector as well. Robot weighed about 102 lbs. for the latter 20 of those matches, plus bumpers at 10 lbs. and battery. Wheel assembly was originally done with hand tools: ratchets and sockets.

I have noticed in the past that the screws have plenty of thread engagement when used to hold the pulleys directly to the HiGrip wheels, but the addition of the hubs to this stackup reduces the thread engagement to the point that they are easy to strip out, even by hand. We stripped out 2 holes in a wheel on the hub side when making a new center wheel assembly (using old screws). One of those holes had been previously threaded with an old-style screw, and we did do the “backward-until-it-clicks” trick while threading it in. 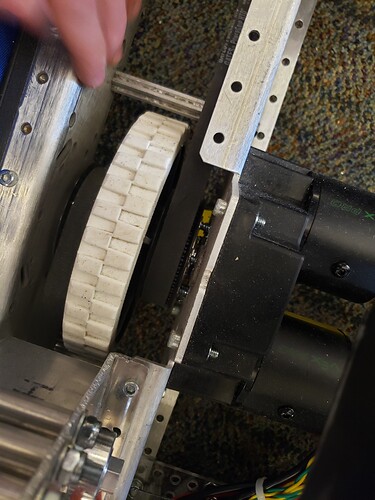 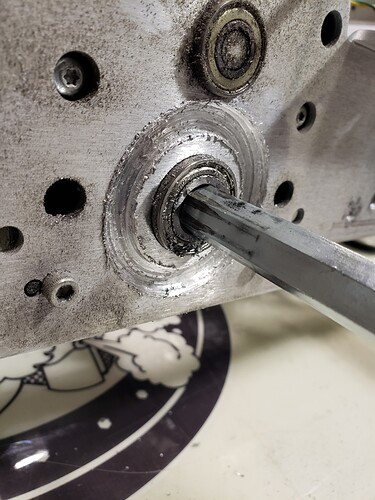 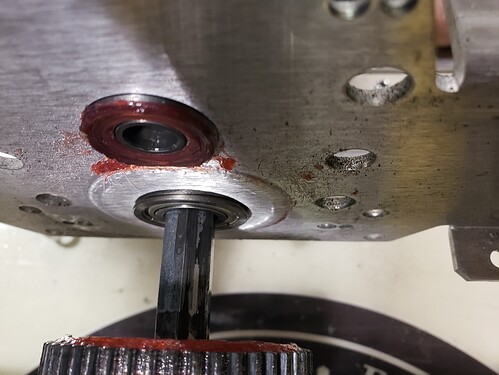 Does anyone know where we can buy the old screws? I’d like to swap out some spares before our competition next week.

Screws continued backing out during our district event this weekend. Inspecting after every match allowed us to catch the screws backing out and snug them up each time, preventing further damage. The drivetrain will get a full teardown before the next event for a proper replacement and hopefully prevention of further issues

It may not be a good idea to use them in the same holes, since they will have to form new threads of a different pitch and geometry. If you choose to use epoxy to bond/strengthen what remains, my recommendation would be G/flex, as most epoxies don’t bond strongly to polycarbonate.

It may also be possible to thru-bolt instead, using locknuts on the spacer side of the wheel, but I have never done this for drivetrain wheels, only intake/shooter wheels.

Sometimes we have used longer wood screws for this.

But we so far haven’t had them back out again after epoxying in place through our first event.

This thread forming screw is 1.25 in. long and features a 10-24 thread. The head of the screw is a hex profile with an integrated washer.

Adding this to the “check list” for our next meeting.

Saw this on our drivetrain too.

Dug into the plate decently deep. Not impressed.

Thanks for sharing and letting us address this.

Not a great year for the kit drive with the non-concentric hubs and missing belts issue as well.

We just completed our second district tournament and playoffs.

All drive time has been on carpet.
Had nut driver to mount pulleys to hub.

I wanted to take the time to also say that this problem occurred to us as well. We had total failure on one side of the drive train, with the wheels locking up, and then we discovered shallow grooves on the other side. We were fortunate to have a kitbot sitting around, so we stole its side plate to make it work. I also want to thank @Nick_Lawrence and Andymark for quickly picking up the phone, and helping us out with this issue and setting up a replacement. I just hope everyone’s becomes familiar with this issue so that they can watch for it.

Yesterday, I helped a team out at the practice field we’re practicing at. They were concerned their drivetrain wasn’t driving straight very well.

These screws were backed out on both sides, but digging in pretty good on the side it was veering to.

Quick tighten (needle nose pliers) and it was good to go.

Maybe Andymark can come up with a 3D printed or ship a tool (thinking like an offset wrench with a boss feature) that can help teams fix this quickly?

We replaced our center wheels last night (outer wheels are vex omnis). The hub side screws only took about 1 rotation before I could pull them out by hand. The pulley-only side was only slightly better at 2-3 turns. None of the screws had backed out yet however. We replaced the wheels with new ones assembled with the 10-24 thread forming screws that were previously included in the kit drivetrain. If you can, I would definitely recommend doing this.

Thanks to all of you for feedback about drive configurations and experiences you’ve all had. It has been immensely helpful to narrow down root causes and fixes.

Today we are releasing a whitepaper that describes this issue, and our recommended fixes. Please feel free to reach out to the email in the paper if you need replacement parts. We’re working on other communication pathways besides this CD post to ensure all are aware.

We’re extremely sorry for the issues that we’ve had with the AM14U5 chassis this year. It’s been a perfect storm of quality issues and supply chain difficulties that we should have navigated better. We will work to improve these things for the future as we all navigate a post-pandemic world, and we appreciate all of your continued patience as we improve. 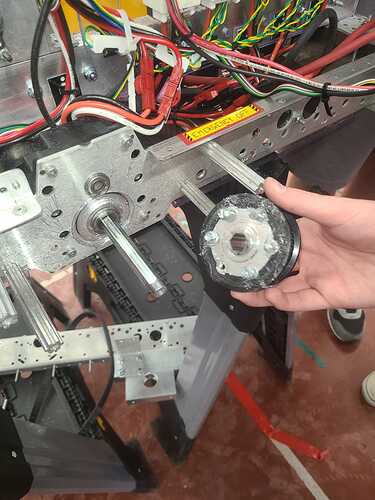 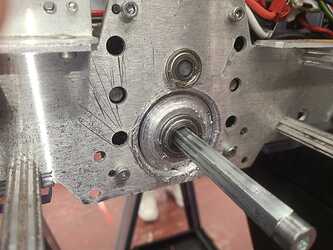 This was what we found after our first competition.

We knew it was a problem when our robot started driving crooked during one of our qualification matches. We took apart the drivetrain then and a screw fell out - at first we thought it was from another team, then realized what it was. After we reassembled the drivetrain (we missed one match) we started checking the screws after each match and re-tightening. We even used some hot glue to try to keep them in. We were able to keep it together to get through finals, but when we got back to our shop after competition this is what we found. (I’m glad I didn’t know it during our matches!)

Our team had similar issues last year, and we didn’t realize it until the screws had nearly cut a hole in our chassis. I would recommend checking your kit for 1 1/4 inch 10 24 machine screws, and if you don’t have access to any of them, be sure to tighten your screws after every time you drive your robot.

The new kit chassis kits for this season should not have this problem. If you assemble a 2023 kit chassis with the 2023 kit chassis screws, there should be no need to tighten the screws frequently, and I would not recommend substituting them for another screw.

This is correct. This thread is from last year. While the screws in this years chassis look similar to the problem screws from 2022, these are longer, and have been extensively tested for backout.
We prefer the new screws because the course pitch allows them to be installed easier by hand, and the 1/4" hex head allows more common drivers to fit into the cavity of the pulley, which allows them to be properly tightened.

Old topic that seems to be resolved with the 2023 KoP chassis. If this needs to be reopened please contact the moderation team.