Quarantine has left me with a good amount of time on my hands, and I spent some of that time working on my design spreadsheet. I’m now ready to release version 5.0.

The equations paper has also been updated with the new calculations. As always, if you have questions on how to use the spreadsheet, if you find any bugs, or if you have an idea for future improvements, feel free to post here or message me privately.

Glad this is a project you’re keeping up to date.

Our team used this on a weekly basis this year.

This is such a helpful tool, and it keeps getting better. Thanks for your commitment to helping FRC.

One thing I’ve been debating recently is going on one of the various video seminar programs that have been popping up recently and doing a video on how to use the spreadsheet as a part of your design workflow. I’d like to gauge people’s interest in this before I spend time on it (especially because if it’s live it would be at ungodly hours of the morning local time).

So, would this be something you would be interested in?

I’ll be honest: I’m not 100% confident in the equation the current version uses to calculate Magnus force. Tldr: I’m looking for someone experienced with advanced fluid dynamics to let me know if it’s right or not.

The current calculation is based on this paper by the University of Illinois Physics Department quantifying the Magnus effect on baseballs. Basically they determined that the force could be expressed as:

This formula matches that in @Ether’s whitepaper and it’s similar to the formula for drag (to which Magnus effect is directly related). The Illinois paper then takes their analysis one step further than Ether’s paper, characterizing the relationship between C_L and a new non-dimensional quantity called the spin factor:

They provided this graph of the relationship: 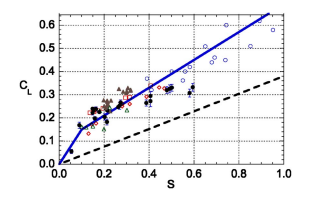 Which approximately corresponds to the function:

This is a much easier function to implement, so I was able to calculate it internally (as opposed to calculating the drag coefficient from the Reynolds number, which is highly non-linear and has to be done manually).

Something still seems off to me though. There’s no accounting for the surface finish of the balls, or whether the ball is in laminar vs. turbulent flow. I would assume both of those would make a significant difference, since they significantly affect the air drag and at the end of the day the Magnus effect is just the difference in drag on either side of the ball due to different surface velocities.

I found a few other formulas that also claimed to calculate Magnus effect, but none of them seemed very promising. The next best was this from NASA, which integrates the Kutta-Joukowski force (lift on a rotating cylinder) across the length of the ball with varying radius. But at the bottom of the page it says that this doesn’t account for fluid viscocity, boundary layers, or any of that important stuff. So it also needs to be multiplied by some arbitrary coefficient to get the true value, and they don’t say how to calculate it other than it’s about 0.15 for a baseball curveball.

I’ve already taken undergraduate fluid dynamics so I have a decent basis in air drag and that kind of stuff. But we didn’t cover the Magnus effect in the course other than mentioning it in passing. I’m hoping someone who has some more experience with this can help set me straight. Thanks

Great Idea.
Is it possible to add a calculator for 3 pulley belt systems? In addition to the 2 pulley calculator already there - it would be very useful
Thanks