An unexpected output of TalonSRX in Swerve 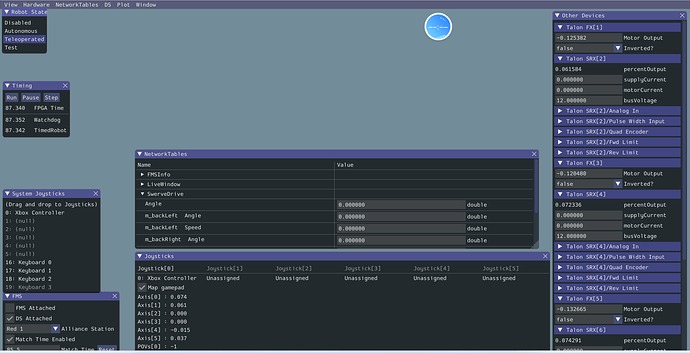 Any answer is appreciated.

Hi @mendax1234! I first want to say I really appreciate you enthusiasm to learn! Having seen the multiple threads you’ve been asking about have been pretty insightful.

You may want to consider changing the thread title to more appropriately address the problem you are having. I read the title “The problem when using TalonSRX in Swerve” and presumed you were saying there was some fundamental issue CTRE had to fix or Swerve and Talons wouldn’t play nicely. Being able to have a clear title explaining your issue will not only help the right people find you, but all help others with similar issues in the future!

Keep up the great work!
(Unfortunately I don’t know about your problem, but I thought I would chime in)

So generally, I like to frame questions in this format:

Looking at your post, here’s what I’m parsing out of it:

For context, for others looking here, in the provided .zip file, I do not see any modeling of azimuth motor/gearbox/encoder behavior. Code appears to be running “open-loop”.

@mendax1234 - can you confirm I’ve accurately summarized your situation and question?

Yes , that is true! l want to make a video to better explain my issue , but it seems that l can’t insert it in this thread.

For context, for others looking here, in the provided .zip file, I do not see any modeling of azimuth motor/gearbox/encoder behavior. Code appears to be running “open-loop”.

l use PIDController when calculating the output of drive and turning swerve.

Thanks for your advice , l will try to avoid this ambiguity.

So when I say “closed loop” versus “open loop”, here’s what I’m describing:

On the real robot, your code is designed to interact with the hardware in a fashion similar to this:

The electronics and hardware influence each other in a way which forms (literally) a closed loop of information. The code outputs (motor commands) are indeed connected back to the inputs (sensor readings).

Of course, the connection isn’t direct, and there’s no lines of code for it. But, indirectly, they are connected.

However, when you run in simulation, the picture looks more like this:

Here, there is no connection at all from the software outputs to the software inputs. No direct or indirect connection. The code is now running in an “open loop” fashion.

For any closed-loop controller (PID included) to function “normally”, it is assumed that some relationship exists between its outputs and its inputs. In simulation, this would not be the case.

I know this doesn’t quite directly answer your question… but hopefully it starts you down a path of resolving the difference between what you expect, and what you see?