My team is using the KOP drivetrain but we want to upgrade our gearbox for a faster speed with a lower amperage using 2 CIM motors. I have used the JVN Calc before, but our team has never done a gearbox upgrade before we do not have that many machining options so we are looking at a COTS item that interphases the KOP drivetrain. Thanks

If you look at the assembly instructions on AM website the the KOP drivebase, it gives you different gear options to change your speed so you just need to buy four gears (2 for each side).

We looked at those and they are not much better we are looking for a different gearbox with more options.

My team is using the KOP drivetrain but we want to upgrade our gearbox for a faster speed with a lower amperage using 2 CIM motors.

You’re kind of asking for everything here. To go faster, you need to gear for it–but that increases torque needs, which means you’re choosing between higher current draw, more motors, and shifting gearboxes to achieve the desired combination.

AndyMark’s EVO Shifter is designed to plunk into the AM14U4. (Full disclosure before going further: I used to work for them.) There is also the EVO Slim, which would allow you to add a third motor (whether CIM or Mini CIM) to the system. Fair warning, three-motor drive gearboxes are capable of causing a robot to brown out if you push too hard with a drivetrain too grippy.

There are also changes that aren’t gearboxes that could cut your currents down.

Is there an EVO shifter kit for two cim, the one you linked says 3 cim, I can’t seem to find one?

Thanks for your help!

AndyMark sells them in 2-motor and 3-motor versions; the main EVO Shifter and EVO Slim product pages will let you select. The main difference is in the input plate; the 3-motor versions have a bigger plate to fit everything in. You can leave one (or two, I guess) of the motor inputs empty without affecting the gearbox operation.

Also, be sure to read their note about motors; you’ll need to come up with a way to get that pinion pressed on, whether finding a suitable press yourself or ordering their motors with the pinions pressed on. (Some teams do other methods of securing them, like filing down the CIM shaft a little and using retaining compound, but I’m not familiar with that process. I recall 829 used it last year.)

Given the current lack of availability of the EVO shifters, you could also take a look at the VexPro 2-CIM Ball Shifter (3-stage version). It’s pretty easy to mount to the Kit Chassis and works great (I think it’s also a bit lighter and more compact than the EVO shifters). I’ve used Vex shifting gearboxes since they came out a few years ago and never had any issues with them.

We are currently testing our own

This will allow us some flexibility between changing planets an suns and the flexibility of using a belt from the output HTD pulley to a printed pulley of pretty much any size that allows mounting it to the wheel and is smaller than the O.D. of the wheel

We are currently testing our own

It’s worth noting that planetary gearboxes are notoriously inefficient and will probably make poor drive gearboxes.

I really don’t think there’s any reason for the vast majority of teams not to use a COTS drive gearbox in FRC right now.

Im just going to post this here, I added the NEO motor to JVN Calculator and from that it looks like it solves a lot of our issues with high amps! We are playing around with other gear ratios as well. 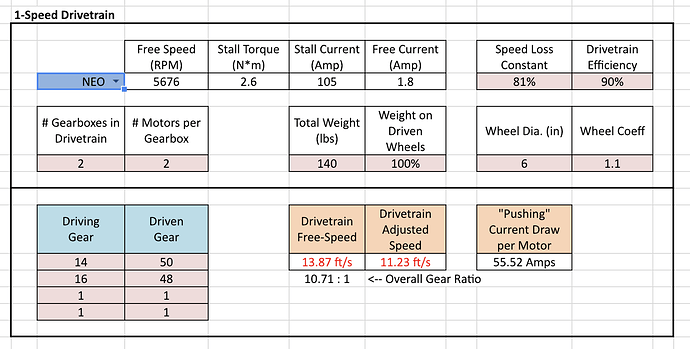 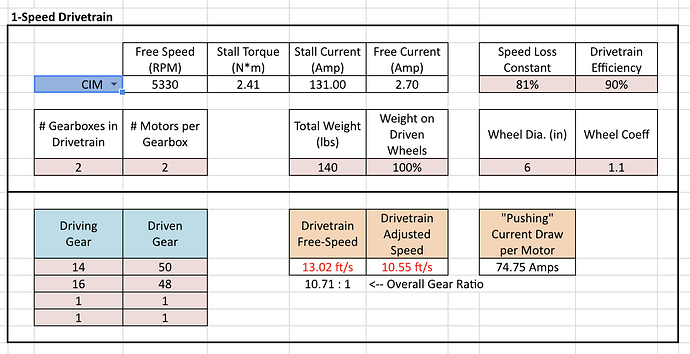 That is certainly an improvement, though still a bit on the high-end (would probably drain your battery faster than you’d want). Also worth noting that we still don’t have stall duration data for the NEOs so using them in a non traction-limited scenario (like this likely would be) might be problematic.

We never had an issue before with battery death and we used the KOP bot with 2cims for years but with not highly technical mechanisms. But this year we are designing/planning much more than we have ever and batteries may become a problem What would be a better solution then this that we can order and build quickly? I also don’t know how much we can trust NEO’s at this moment so I do not want to pull any triggers yet. This is also another option we can do with gears in our shop. 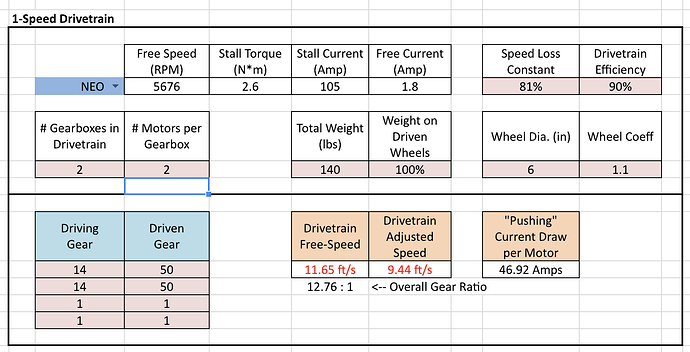 That looks more reasonable, and is a pretty average speed (maybe a bit on the slow end, but still, it would work).

That said, if you also want a high-speed option, then you’d be looking at a 2-speed gearbox again, like the one’s we mentioned earlier. Any of those gearbox options are pretty easy to drop-in to the Kit Chassis.

Note also that going from 6" wheels to 4" or 8" wheels is an easy way for “gearing” down or up another 33% beyond the options of any given gearbox. (You may need to get more belts, too!).

I would advise you look into the tests 1678 did on the neo tinyurl.com/1678NeoTest, I am not saying you should not use them but you should have a backup plan if this testing is accurate and realistic. Because Driving a robot with a 0.8 second response time would be extremely challenging and likely limit how well you could do in competition.

I forget what the ratios are but on andymark.com you can get gears for what ever you want. right now were messing around with about 13 FPS to see how it does.

Keep in mind that, while this is a great way to affect your robot’s final speed, it also affects ground clearance. The platform last year was similar to this year, and posed a risk of high-centering for robots with 4" wheels. I wouldn’t use 4" wheels without examining this potential issue first!

I would advise you look into the tests 1678 did on the neo tinyurl.com/1678NeoTest, I am not saying you should not use them but you should have a backup plan if this testing is accurate and realistic. Because Driving a robot with a 0.8 second response time would be extremely challenging and likely limit how well you could do in competition.

Just thought I’d give this thread an update: The delay that was seen in these tests has been fixed in the latest SPARK MAX Firmware Update.