I watched a ton of Week 1 matches and have noticed a general trend in the gameplay that is probably pretty obvious: Most, if not all teams, go for the high port with the points being doubled. However, I’m thinking that maybe the low port could be the way to go. It would make it easier for alliances to unlock the Control Panel while perhaps getting power cells in at a faster and more reliable rate than the high port (lots of teams miss lots of their high port shots).

I guess my question is what do you guys think about going exclusively low port as a possible strategy going forward? Were there any teams Week 1 that I didn’t see who leaned on Low Port and were successful with it? (I watched mostly NE matches as that is where my team resides) 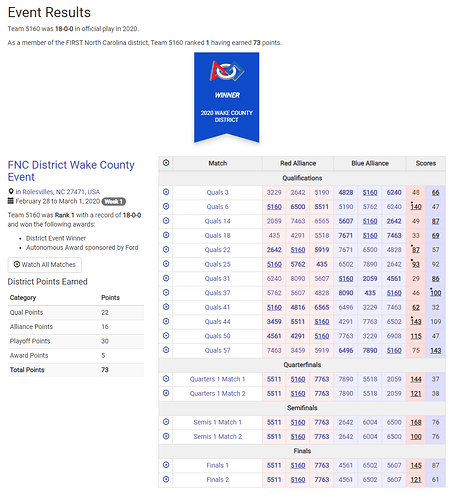 My team is a low port only bot, and we did pretty well in our district this past weekend. We finished 6 overall, we were an alliance captain, and made it all the way to the Semi-Finals. It could definitely be a strategy that works, for sure. At least in my opinion and based on our performance.

I think it’s going to show up as a viable strategy, a few teams will have success with the idea. I know of one pretty good team that is going this route, we’ll see how they do in a little while.

In our strategy discussions, we decided that making balls fly through the air is just so much fun, that we had to go for the high goal.

Low port will have long cycles if they have to go back to the loading station to get power cells however if they are teamed with a long shooter that forces teams to dump balls to avoid the hoarding penalty then it is a great strategy as they can pick up the opponent team cells.

I have a feeling that the low port this year will be like the low goal in 2016. At some of the early events in 2016 fast low cyclers were able to find success since they could rush the RP and end up out cycling high shooters.

Teams like 2122 (before champs) and 1011 were especially successful winning AZ North and Colorado that year respectively doing only low goal.

However, as the season progressed the low cyclers were no longer able to out value their high shooting counterparts and either had to adapt or risk losing out to other robots. This was I’m pretty sure the motivating factor that had 2122 switch over to high goal mid season and ended up winning their division at champs.

I think low teams in 2020 will find something similar as time goes on but I think it may happen even faster than in 2016 since extremely quick high shooters are already doing very well at most events.

I largely agree with everything you said. I think the biggest differences are the large high goal target in Infinite Recharge, and holding multiple game objects makes shooting high less risky that it was in 2016.

Low goal bots in 2016 were definitely very strong for ranking, and I think its possible low goal bots might find a similar niche this year, but the second RP is much harder to attain.

However, these teams all struggled in the playoffs, when the good high goal shooters paired up and readily outscored them. Low goal scoring particularly suffers in auto, where dumping three instead of shooting three puts you six points in the hole even before you account for inner-goal shots and extra ball autos.

Totally agree with your observations. The differences you pointed out only seem to make the situation worse for low teams this year. I think with the much higher threshold for the second RP and with no RP bonus in elims (unlike 2016) it doesn’t seem like low goal robots have much of a chance in eliminations.

So I haven’t really been watching but friends competing at the Ontario District Durham College event say that there were a number of Everybots, or variants. For an event with 36 teams, to have 4-5 Everybots seems significant.

I’m pleased to see that Bottom Port scoring is more viable this year than, say, the low efficiency goal in 2017 or the lowest basket in 2012. That being said, it doesn’t seem to be as viable as low goal scoring in 2016. That year, you could seed #1 at a DCMP or in your division at Worlds with a low goal bot.

I’m not sure where the 2014 low goal fits in to all of this. With three assists, it was worth about 3/4 of a high goal shot, which means it was relatively valuable. However, not that many alliances used the low goal as their primary target because usually at least one robot on each alliance was able to shoot high.

Our team decided to make a low port scorer, but we made sure to have a good working color wheel spinner, and climber. We are competing in week 2 so we will see how it works out for us.

I’m guessing most of the bottom port teams don’t design with the intention of becoming #1 seeds.
In our case, it’s much more feasible to design to be the 24th best team at an event than the 1st best.

Supply them with balls through trench cycles or score in the low port. We dont want to play defense because we believe the best defense is trench cycles.

Spin the wheel and quick hang

3 high shooters or 2 high and a low

We had some debate on our team on kickoff weekend on what would be the best strategy for us. I personally would have advocated for a quick low port cycler (I use the term “dump truck”) with a climber and maybe a control panel mechanism. However, the students really wanted to build a shooter, and I can’t really blame them (it’s fun, we’ve never done it, it looks cool, there’s lots to learn, etc).

As a result of our focus on the shooter we have not yet got a climb, and I’m not sure we will have one in time for our first competition. We may have given up some game strategy in favour of team and individual learning opportunities. I’m OK with that.

A low bot that can feed a shooter in autonomous and climb consistently will have a lot of value to alliances, especially early on. I expect if they can also get the control panel spin consistently too they’ll be even more value too as they’d keep the high goal shooters focused on shooting.

My team has a low port bot and we did decent in our week 1 competition. I will say cycle times for us (primarily due to little driver practice) were extremely slow and we were really only ranked so high (5th) because of climbing. We were the 3rd seed alliance captain and ended making it to the final and only lost by 10ish points both times. During playoffs, we solely grabbed power cells from the human player station and dumped them in the trench for our high shooter bots. This strategy seemed to work pretty well. That being said, I completely agree that low port teams can do well at the beginning of the season but the probability of seeing low port teams preforming well at competitions like worlds are very low in my opinion.