50 more minutes at work then drive home pick up stuff, head to school to pack up and hopefully on the road by 6:00! 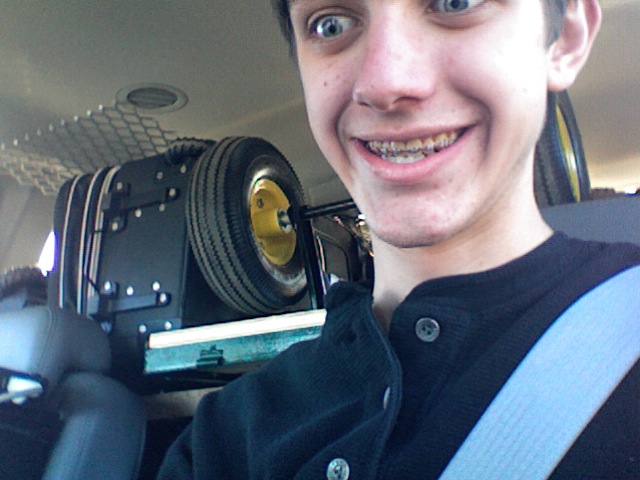 That would make a great WAI.
Have a blast!

How are you in the car? Do you have Wifi or something?

An advance group of TechnoKats (eight students, a handful of mentors) is on the way from Kokomo to St. Louis right now. The trailer full of pit paraphernalia started out very early today and should have gotten there a few hours ago. The rest of the team will be leaving tomorrow morning, to arrive a bit before noon.

My old team (830) should be arriving in st Louis in a few hours. Good Luck Rat Pack.

Well, it seems like all the St. Louis teams are on the move. PantherTech left early this morning and are now in St. Louis, I’m not sure why they(I can’t go because of class :() left so early. Best of luck to all you teams at St. Louis!!

A few 587 members who don’t like driving/waking up really early in the morning are leaving today. Very early tomorrow, the core build team, programmers, and drivers are heading up to be there by the time the pits open. Later tomorrow, the rest of the team (PR, animation, etc) is leaving to arrive late afternoon.

753 leaves in about 40 minutes!
Its only a 3.5 hour drive to Portland Oregon, but were cramped!
To much luggage and the mascot suit is HUGE!
We can’t wait, were getting here early so we can swim in the pool and contemplate game strategy…

How are you in the car? Do you have Wifi or something?

It’s nice living 20 minutes away from where the competition is held at.

It’s nice living 20 minutes away from where the competition is held at.

We are about 2.5 hours from manchester, about 2.5 minutes from UTC regional (we are a hartford team…)

I plan to leave around 6:45 tomorrow morning, take the bus to school, walk 2 blocks to the Siegel Center and arrive at about 8:30

217 is on its way by bus to the St. Louis Regional. Spoke to Paul earlier, they were passing through Indiana and debating about making a stop at their favorite farm. I should be into NJ by the early afternoon tomorrow.
-wayne

Team 1250 is leaving at 7:45 pm for St. Louis. All night bus ride and then showing up at the arena right off of it. It should be interesting.

172 is carpooling down to Manchester, leaving 6:30 in the morning.

…we planned on taking a bus this year, but it seems that all the school bus drivers in the state are sick this week…

i’m in the hotel in portland