Anyone else finding Cargo not being scored?

Is it me or is the number of cargo that the field is missing is quite excessive? Like we had a couple of matches where the field didn’t count our cargo.

Hope FIRST fixes it with an update or something. 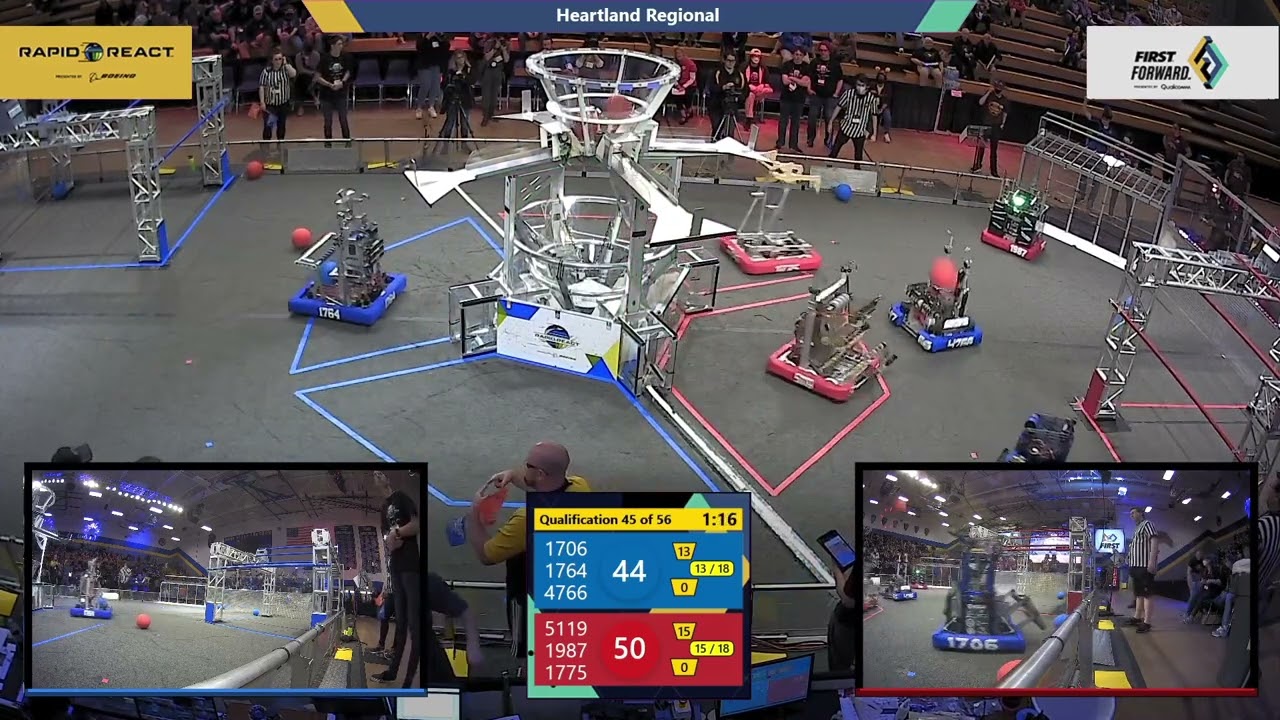 Qual 45 of Heartland the field stopped counting points for the last 1:30 of the match.

The field staff and referees determined there was no field fault as the issue could not be replicated and there was “no evidence” of an issue with the field. Atleast that’s what students from both alliances reported from the question box.

The FTA did check the ball sensor calibration afterwards but it seems like it may of been a potential software hangup in the FMS, not sure but I am curious if it’s something FIRST can take a look at for future events.

Both alliances wanted to replay the match as we both missed out on Cargo RP, but unfortunately this was not granted.

Overall don’t think there was significant effect to the outcome of quals but definitely an interesting thing to keep an eye on.

First Updates Now also did a video not that long ago and talked about this issue across FIRST. It seems that the FTAs (Thank you @EricH ) needed to add black tape on the other side of the sensors on the top hub at the Orange County Regional though

We had the opposite issue happen at FiT Fort Worth District Event. Qual match 43, the opposing alliance was given somewhere on the order of 50 autonomous points due to a sensor error (I assume?).
The referees didn’t correct this after an extensive review and Blue Alliance still shows 12 shots made in autonomous, which I would assume is a world record. Cost us a couple ranking points which really didn’t matter for us, but it really had people questioning the accuracy of the scoring at that tournament from what I heard around the pits.
Lots of issues this year, not sure what exactly is going on…

We had the same issue at OK Regional week 2. Refs allowed us to replay the match. Came up again at the Heartland Regionals week 3. Sent our team captain to the ref, watched the video, 20 balls went in, only 19 counted. They declined to do anything about it, diagnostics before and after match was clear and there is no official video review allowed. Cost us a cargo ranking point… we later found out it was the same physical field at the OK event and Heartland event. It will be at our event for the Central Missouri Regional week 5. Makes me wonder how many miscored events there have been…

As the other alliance in this match, can confirm that our students went to the box and were told the same thing. We agree that ultimately it didn’t have an impact on the final outcome of the event, but it very well could have.

Also we want to give a huge shout out and thanks to our alliance partners for Elims, 1706 Ratchet Rockers, and 5098 Stinger. It was great playing with you guys and look forward to seeing you in Houston.

As a AB PLC programmer (Which is what the FMS system is as far as I know.) I can tell you the match video show is not a sensor/sensor calibration issue. Each ball exit uses at least one sensor. (I would think they would use 2 one for detection and one for color.) For all 4/8 even 2 exits sensors to stop working completely for that long is basically impossible.

It is the same field that was up at Lake Superior, as well. Field delays every 10 matches or so as they checked the dang hub.

On FRC Roundup Episode one and two, we talked about this issue from weeks one and two.

It was awesome playing with you guys as well, such a fun event hope to see you in Houston and other events in future years as well!

In addition to cargo not being counted or scored, sometimes the cargo counts recorded by the API are inconsistent with the cargo scores. Here are all the instances I found of this occurring in week 1 and week 2.

At CIR l, all the cargo i counted was scored.

It did affect us since our record in qualification matches could have been 7-5 instead of 6-6. Such a common problem that FIRST needs to solve.

Back at a week 1 event, Kokomo District in Indiana, quals match 13 had some issues.

Blue alliance scored 25 cargo total in the upper and lower hub, but the system only counted 15. Red’s counter stopped at 14 and should have gone to 16.

A team student went to the question box for clarification. Field crew tried to look for evidence of any miscounting, but could not find any.

Field crew tried to look for evidence of any miscounting, but could not find any.

As someone who has set up the field I can say that there are 3 sensors for detecting cargo at every hub port, so 24 sensors total. I am not 100% sure if it’s 2 distance + 1 color, or 2 color + 1 distance, but this is the setup. Given the accuracy of these sensors and how much the hub gets beat up during matches, I can’t say that I am surprised when there are errors in counting. And if there is not a ref/fta comparing the automatic scoring to what’s actually happening and there’s no video review… again not surprised that there are errors that are not easily verifiable.

I am waiting for an important match to be decided by a scoring error to see what HQ’s response to all this is.

When each team is paying upwards of 250 bucks a match all matches should be important as far as HQ is concerned. Very disappointed this hasn’t been addressed, at least as a “we’re looking into it” blog post.

I used to be completely against video review, but after qualification match 45 at Heartland that Emerson linked above, I’m starting to wonder if a ‘sky judge’ type system may be beneficial for field faults. It was extremely frustrating to witness a match where nearly everyone in the arena knew something went wrong with the field – none of the ~16 cargo scored in the final 90 seconds counted – but nothing could be done to fix the situation. Perhaps it would make sense for the HR/FTA to notify FIRST HQ about a potential issue and they can review the video and if a field fault is found, replay the match at the end of qualifications.

I know other events have replayed matches due to field issues such as counting cargo. What strategies did those team use to get their matches replayed? Is there anything teams can do in these situations?

If you can get a ref/fta’s attention during the match that’s probably your best bet. If nobody on the crew is paying close attention to the score it can be difficult to verify these types of things imo.