AR/VR use in FIRST

Can anyone tell me about your experience with FIRST utilizing AR/VR? What are the issues and constraints?

I am a former coach, teacher and school administrator. I started a private school and would love to include FIRST robotics in our STEM programs. Unfortunately, like many other industries, leaders are dealing with COVID and the aftermath.

We are avid proponents of VR/AR and would love to see it utilized more in FIRST.

Can anyone point me to threads concerning the topic? I would appreciate it.

On-field, there was a Hololens trial a couple years back. Can’t say that there’s been any progress on including that since then.

Off-field, there’s a VR field every year, provided by FIRST, but I can’t say that there’s been anything beyond that.

I missed the chance to reply to your earlier thread. I’m interested in learning more about your ideas.

The extent of my team’s experience using VR/AR in FRC has been:
– playing around with the VR playing field assets produced by various sponsors Playing Field | FIRST
– learning about FRC 900’s “Zebreality” work as documented in their whitepaper during our visit to their space in fall 2018 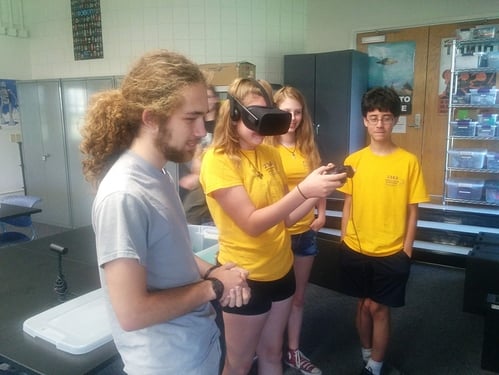 Hello, thank you for sharing. All I can really say here is that in times like these, the future is written by those willing to take a risk on it.

The first community is vast and if this became the mission, for the times we are in, it would not only move us forward, but will excite the community in ways only seen during the height of competition.

That would be 2017, sponsored by JPL iirc; a few other NASA/JPL teams were included so they may chime in.

Tl/dr: Dumb rules made it useless.

We were planning a heads-up display for a few states (gear possessed, climb mode, no air pressure, etc), but were told it was treated the same as a joystick for LAR, so no wearing or being plugged in during auto. Naturally yeeted that idea right out the window and just used it to show off robot CAD in the pits.
For Arizona we were specifically permitted to have the headset on the whole match, but only during qualifications matches. That’s like telling your driver to swap from flight sticks to a game pad halfway through comp, so yeeted as well.

I’m sorry, but whoever made that call was either terribly informed or actively working against developing anything. This mini-series is part of a much larger rant Troy may some day go on regarding various things at every level of FRC

You want AR development on the field? Driver gets to wear the headset, plugged in and ready to go, for the whole match. No stupid, nonsensical exceptions.