Hi there so I have decided to pursue building a 1 joint arm with 2 beams that extends out and up like rotating a pen from south to north from the point of rotation. I will be using a chain and 2 gears 1 large attached to the point of rotation and a smaller one attached to the gear box which is attached to 2 CIM motors. I am having trouble finding gears big enough to be 4 in diameter and was wondering if anyone knows where to buy one. Also any suggestions on gear box that can lift 100lb with 2 cim motors? 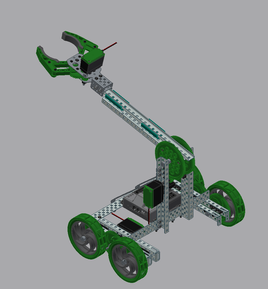 Not really answering your question but I know WCP sells a arm gearbox. You can look to the gears they use.

Vexpro sells gears that have an OD of 4 inches.

In terms of the gearbox, I recommend using a design tool of some sort like JVN’s calculator to determine gear ratios and which gearbox will perform best for you.

Home of the JVN DesignCalc sometimes called the JVN Spreadsheet for FRC Motor and Gearing Calculations.

I don’t know how to use the calculator. Can I input the ratio I want to get the recommended gear box? I don’t want to build a gear box I just need one that can lift 100lbs…

I’m not sure what exactly you’re intending, but 973 Ramp has a video on arm motor sizing.

I’m not sure how easy it will be to understand depending on your experience.

gears big enough to be 4 in diameter

My team has never built an arm, but typically in FRC you don’t want to power a large arm off a large gear (though teams have successfully done so). it might be better to replace the shoulder joint in the Vex clawbot with a sprocket run using chain. Diameter is one issue, but another is that chain does a better job of absorbing shock loads (e.g. when you run your arm into something). VexPro sells #25 sprockets up to ~6 in and #35 sprockets up to ~8 in.

One example of a sprocket arm is 254’s robot last year.

As an aside, I see also that you’re a rookie team. Have you reached out to an experienced team nearby you? They may be able to help you with this problem (and more problems you might not realize you have). One thing I wish that our team had done more as rookies was use existing teams around us. Part of the ethos of FIRST is helping out other teams, so other teams will be generally be glad you reached out.

sorry i put the vex image in to show the arm movement. it will be a gear attatched to the motor at the base of the arm which is attatched to a fixed gear at the rotating point of the moving arm and the base arm. It will move via chain but i know that that will not be strong enough on its own to lift the robot off the ground which is why i was looking for input on a gear box that would be strong enough…

The video that Zucker linked along with the rest of the series is a great resource. Remember that you need to consider the length of the arm. 100lbs on the end of a 36 inch arm is going to be twice as hard to lift as 100lbs on the end of a 18 inch arm. I would use either JVN’s calculator or make your own spreadsheet to find a gear ratio that works for you. Find a cots gearbox that is close to the desired ratio, and then you can use an external reduction from there.

nobody on my team is that xperienced to use these calculators. Are you able to send me an example with the 18 in arm?

You really need to use a tool like the JVN Calculator that @Nick_Kieft provided the link for. There are several videos on how to use the calculator on YouTube.

You also need to set up the problem properly, in terms of the physics involved. This means you have to determine what positions of the arm you need to use when doing the calculations.

The JVN Calculator might show that your proposal to lift 100 lb. with 2 CIM motors will work and take something like 4 1/2 minutes to do it.

It’s nice to see another rookie team from my home town.

You want to use the rotary tab in JVNs calculator. It’s setup exactly for what you want.

As you can see here CIMs have peak efficiency around 10-20A, so usually want to run them in that range.

If the is still confusing, you really ought to seek help from a nearby team. They will be able to help you in ways we can’t.