Our intake was raised and lowered with these pneumatics on either side. (4" stroke,
6498K636) At an offseason comp, we got hit from the side with the intake down, which bent the piston rod a bit and got stuck. 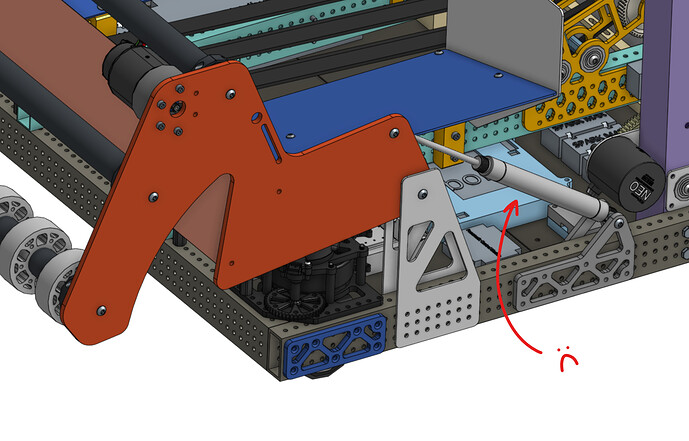 What are some ideas for making sure our cylinders don’t take load in undesired directions? We’ve been thinking about a future redesign with a four-bar instead, but wanted to ask here as well

Also, if anyone has any tips for bending pneumatics straight again, it would be very appreciated

If you have the weight, a piece of lexan on the outside of that mechanism might do the trick to deflect an impact.

In general, that’s the real strategy we try to use: make sure, on a weird impact, the rod for the cylinder isn’t taking the brunt of the impact. We’ve missed this as a requirement plenty of times though.

The secrets of pneumatics bending were lost when the Fire Nation attacked.

Protecting the piston is key. If it’s impacted by another robot… we’ll, it’s only attached at the ends, which makes it easy to bend in the “middle”. Protection may mean a panel of some sort outside of it. It may mean adding some structure (1x1 tubing, for example) above or below it to absorb most expected impacts.

Depending on requirements, you can think about using a larger bore cylinder. Larger cylinders typically mean a thicker rod. More material = harder to bend. Of course, that comes at a cost of weight and air - a greater diameter means greater volume! You may be able to lower the pressure to help with that. 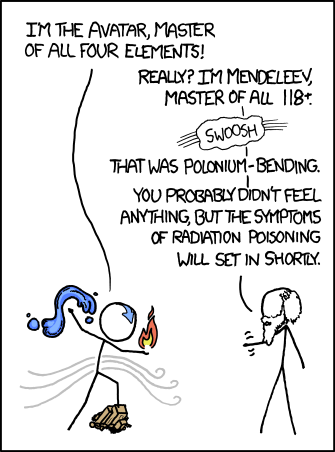 Of all the nations, the armies of the ununoctium-benders are probably the least intimidating. The xenon-benders come close, but their flickery signs are at least effective for propaganda.

We had an interesting design pop up due to little space being left to mount our 2020 intake. We ended up aiming the cylinders backwards from usual and having the intake out while the cylinder was in. This makes it pretty difficult to damage the cylinder. Hopefully this picture makes things clear enough but happy to answer any questions. We ended up using this intake on our IR@home robot as well which is the partial bot shown in this picture. 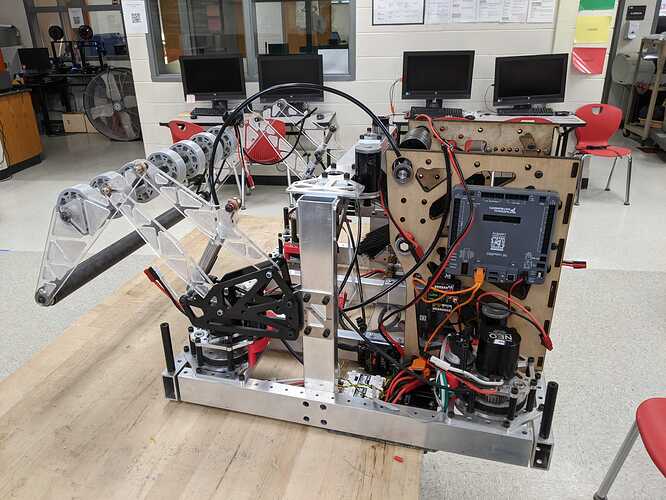 For comparison, here is the intake in it’s stored state. 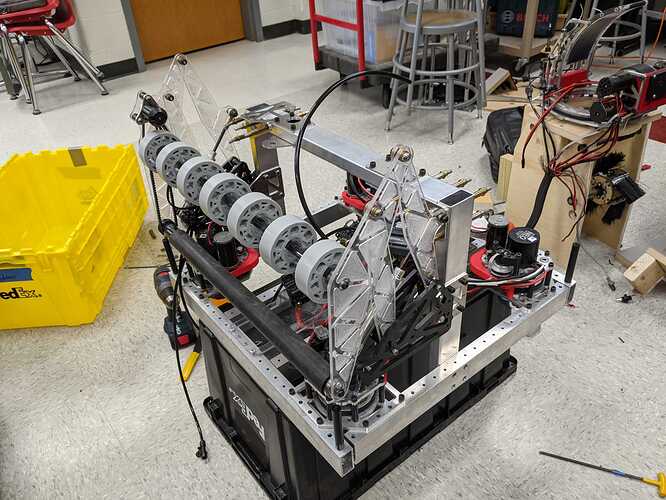 Given the geometry shown in your CAD picture, it looks like you would have the space to add a new attachment point to the intake side plate below the hinge point such that the cylinder would be very low and close to the frame rail. This would protect the cylinder behind the bumper. Obviously, the action would be reversed in this arrangement (cylinder extended to retract the intake and retracted to extend the intake). But it still should have adequate lever arm to provide the necessary force.

Another option would be to use some sort of frangible attachment so that the cylinder would break away from the intake before bending. We have used nylon bolts (from Home Depot) to attach things that we wanted to break away before they could be damaged. That worked pretty well. You will want to have enough replacement nylon bolts to be able to replace them after they break away. Hopefully they don’t break from the force of the cylinder itself.

Straightening a bent rod is nearly impossible. We had similar issues of bending rods in 2019 and tried straightening several. We were only able to get one to work after straightening and it was leaky. Your best bet if you can’t protect the cylinder would be to have plenty of spare cylinders.

Two best strategies as stated are:
#1 protection, a guard or getting the cylinder inside the robot as far as possible.
#2 design it so that the cylinder is retracted when the venerable mechanism is deployed.

Repairing a bent cylinder rod hard is very difficult. I have managed in the past to get one working but it always had a part in the travel of the rod where you could feel resistance.

I will also add a simple potential fix - put a spherical ball joint on one or both ends of the cylinders. Short of getting physically hit, or buckling, this will eliminate side loading on the cylinders when the mechanism is deflected to the side.

This is a decently clean solution

I was going to go on at length about relocating the cylinder and using a linkage. Especially when you only care about stowed and deployed position, vs the displacement vs time path it takes to get there (i.e. linear movement vs sinusoidal). This layout looks pretty good to me.

Also, if anyone has any tips for bending pneumatics straight again, it would be very appreciated

Tappy tap tap with a dead blow. If it’s any more than 5* or so it’s probably a waste of time. We got our floor intake in 2017 probably once an event; a couple minutes of wacking and a straight edge would get it close enough.

They’re never quite the same and you’ll be able to feel the rough spots if it’s not in the robot, but usually not an issue if the bore is a bit oversized for what it’s doing.

I agree, there is a sort of zen satisfaction in straightening them sufficiently. But they are never really the same afterward.

Protection for your pneumatic cylinders (and other mission critical components) is a good design goal to have.

Our Arial Assault robot had an intake system similar to the one @bkim posted the CAD for. In one match it would not open fully. After the match, we found a small dent in the body of the cylinder. It would extend smoothly until the piston inside encountered the dent and stopped. It was something like 5 to 6 inches inside our frame perimeter but another robot still managed to hit it.

Larger cylinders typically mean a thicker rod. More material = harder to bend. Of course, that comes at a cost of weight and air - a greater diameter means greater volume!

Not necessarily! You can use a shorter cylinder (though it does mean moving the pivot points). 3946 has a couple of Bimba FO 502’s (2½" bore, 2" stroke flat mount) which have been used on at least two different robots, buried deep inside where they weren’t going to get hit anyway. On the 2018 post-season robot, it was so well hidden a mentor from another team came over to investigate the “magic” arm. It does roughly the same work as a 12" stroke, 1-1/16" bore cylinder, with a MUCH smaller chance of getting bent.