I was watching the stream, and just watched this match:

During autonomous, team 3581 backed away from the hub and stopped. During teleop, they moved back towards the hub, their intake fell down and they appeared to be dead after that (they did move once more, pushing briefly against the hub). During the remainder of the match they were stationary. twice they were brushed by the bumper of a blue robot. That was the extent of their action during the match. After the match, they were issued a red card for damaging another robot to the point that the robot “couldn’t run”.

**G205 This isn’t combat robotics. A ROBOT may not damage or functionally impair an opponent
ROBOT in either of the following ways:
A. deliberately, as perceived by a REFEREE.
B. regardless of intent, by initiating contact inside the vertical projection of an opponent
ROBOT’S FRAME PERIMETER. Contact between the ROBOT’S BUMPERS or COMPONENTS
inside the ROBOT’S FRAME PERIMETER and COMPONENTS inside an opening of an
opponent’s BUMPERS is an exception to this rule.
Violation: TECH FOUL and YELLOW CARD. If opponent ROBOT is unable to drive, TECH FOUL and
RED CARD

While the rule is clear, if you initiate contact inside the frame perimeter of an opponent robot, and that robot is damaged such that it can no longer drive, the penalty is a tech foul and a red card.
I can only guess that he referee just got the team number wrong. There was a dead blue robot at the end of the match, but there is no way that damage was caused by a robot that was basically dead itself the whole match.

You are talking about why 4188 got a yellow right? That makes sense to me. Why 3581 got a red…nobody knows

I don’t see a single blue robot unable to drive at any point during the match. Being caught on your opponents Hangar doesn’t count as being inoperable last time I checked.

Unless they got called in the last 2 seconds of the match when there was contact initiated by blue on 3581 who was parked, I can’t see a single other time when all 3 robots aren’t able to move in some way.

3581 Appeared to have run into a blue robot during the last 5 seconds of autonomous. After that point the blue robot they ran into only played defense. Is it possible that blue robot had something damaged that caused them to not function (other than their drivetrain)?

3581 is not the red robot that crossed the centerline in autonomous, and it never contacted any other robot during autonomous at all. 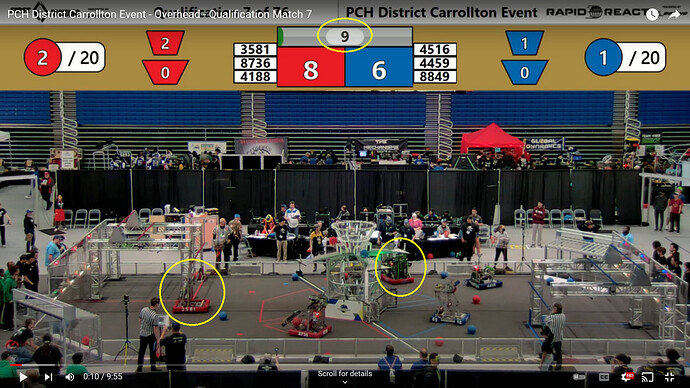 Update: I think they retracted this card. Neither TBA nor FIRST Official is showing them with a DQ. FIRST Official is behind, but it shows a result for Qual 7 and a different team DQed in their next match, but no problem for them now:

NO, I was talking about the red on 3581. I could not see what was happening between the blue bots playing defense on 4188 and 4188, but it looked intense. The ref was right there, so I guess she saw something.

Did you see who I was replying to? It was Alex_Y who removed his posts. I agree with you…