Banners are up at school

Support for FIRST Robotics from school administrators, or the lack thereof, seems to always be a topic, so we want to hold up the great support we enjoy from our school and district. The new principal at Lee’s Summit West High School insisted that our banners be up for the new school year, and paid to have duplicates made so that the originals could remain in our build site (newly provided by the district last year.) They are prominently dispayed in the most public location in the building. Thanks Dr. Sharp! 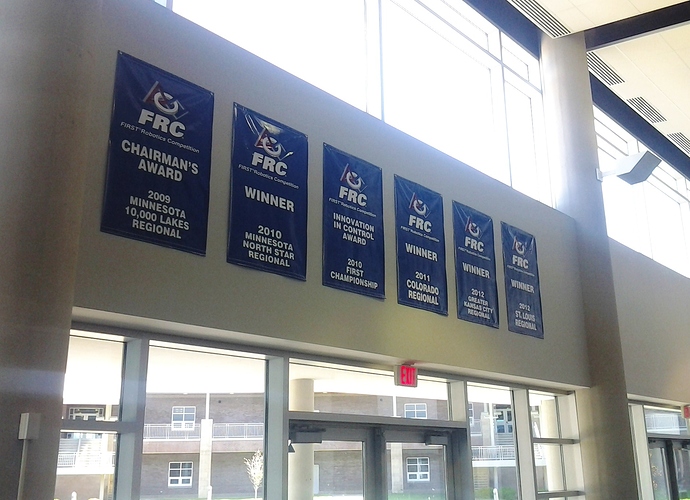 What an awesome administration! I personally would love to have our banners hang in the front of the school instead of them being placed next to our physics classroom, but hey, at least they’re hung up

Both of the high schools administration staff in our district have refuted hanging banners 3081 got their Regional and State trophies in a case but both 3081 and 2470 did not get their banners hung. 2470 has been trying since 10k lakes in 09

Good to see school admin with their priorities balanced.

Our Schools admin lost ours from 2006…its still a sore spot with me.
Its supposed to be in the school somewhere, but no one knows where it
is. For all i know it might have accidently gotten thrown out.

Both of the high schools administration staff in our district have refuted hanging banners 3081 got their Regional and State trophies in a case but both 3081 and 2470 did not get their banners hung. 2470 has been trying since 10k lakes in 09

To clairfy, our administration said they would put our banner up… In the basement where no one would see it.

They are also making us pay to put up our trophy from 2009!

Wow its awesome that you have that level of support from your school and its clear you have more than enough banners to hang. I can agree with the above posts in that I’m still trying to convince my school administrators to lets us display our trophies in the school. We’re more decorated then most sports teams and in a shorter period of time, why can’t we get our space!

All the awards our school wins in any sport is put on display in the front office for atleast 1 year after the award was won. This is pretty cool because we have Regional Winners, Engineering Excellence, Industrial Design, Innovation in Control Award, Entrepreneurship Award, and Division Finalist trophies all next to our school’s State Basketball championship and 3 State Football championships.

We have our single banner hanging in the front hall, next to the banner from our school’s state 2010 wrestling champion. Our two trophies were put into a trophy case outside of the main cafeteria, with all of the sports trophies.

We hung our banner up in our room, because it seems like nobody from our school supports us. But our trophies are in our own trophy case outside our room, in the hall way. Pretty cool I guess

They look awesome up there! Every team should be able to do this, the sports teams all get to hang their fancy banners why can’t we! We’re working to get all of our banners hung up in all the school we have students from, but thats pretty difficult. Oh the woes of having students from 5 school. :rolleyes: Someday they’ll all be up!

We have some trophies in a classroom at our main high school, but our banners and the trophies for USC are displayed prominently in the atrium of USC’s Swearingen Engineering Center: 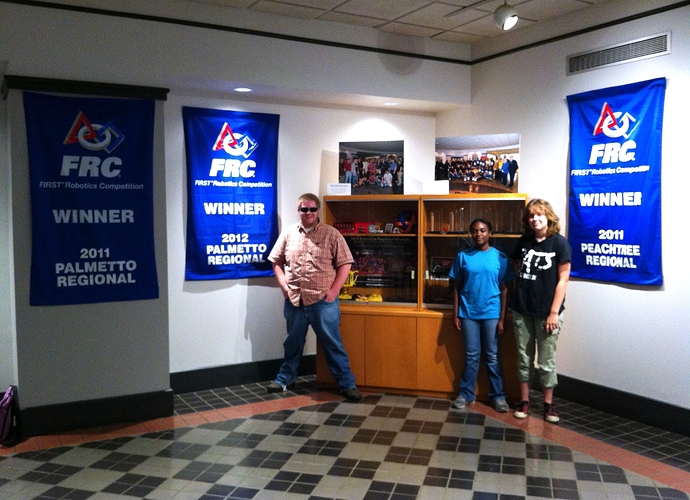 With discussion of the banner arrangement, I thought I’d share 2815’s arrangement. While not at the kids’ school, they are on display at a school–one of the main atriums of Swearingen Engineering Center at the University of South Carolina. On display are all three regional banners we’ve won (unless they’re traveling with us), and the case contains some 2815 memorabilia and trophies from USC’s FIRST activities. Most of them are from 2815, but there are also some FLL trophies given to the College and 1398’s 2010 Palmetto trophy when they collaborated and built with us at USC.

As the athletics team posters say around here, it’s great to be a Gamecock.

We don’t have any banners (yet), but our Rookie All-Star trophy is sitting on our principal’s desk.

We don’t have any banners yet… but we have a lot of trophies. In our school the trophies are not displayed, the principal has all of the school trophies in her office. (99% precent of them are from FIRST)

Good to see school admin with their priorities balanced.

Our high school football team played on ESPN yesterday, defeating the reigning state champions 23-0. In typical ESPN fashion their website had an article previewing the match-up. Check it out here.

When searching for an interesting tid-bit to mention about the school the reporter remembered talking to the head football coach a year ago about the robotics team and included this in the article.

Bet you didn’t know: As good as Lee’s Summit West is in football, the school’s robotics team is considered one of the nation’s elite.

I’m not sure the rest of the robotics world would consider us one of the nation’s elite yet… but having our school and head football coach publicly mention it certainly helps with recruiting and demonstrates the cultural status the team has earned in our school. Thanks coach Boehm.

Edit: Just realized that there was nothing in this thread that used the key words Team Titanium or FRC 1986 and wanted to help our new team members searching our history on Delphi find this thread.

Ssshhhhh!!! I’m hoping you guys fly under the radar for Fantasy FIRST!

Ssshhhhh!!! I’m hoping you guys fly under the radar for Fantasy FIRST!

They’ve been regional winners and Championship first round picks for three years running. They’re elite in my book.

(Though it wasn’t as successful, I still love their 2009 robot)

They’ve been regional winners and Championship first round picks for three years running. They’re elite in my book.

(Though it wasn’t as successful, I still love their 2009 robot)

Are they extremely good, yes. I wouldnt consider them elite until they win and be consistent early picks at champs for 5 years. There are alot of teams that are regional winners and early picks for trends of 2-3 years at a time; but it is a select few who can do it after the “changing of the guard” after sending off those 4 year students.

Anyways, back to the original post, very cool display! Our team has a small trophy case and we don’t have anywhere to display our banners in the school. Congrats guys!