Battery Cart
7457 Just finished its first season, and we are trying to up our quality.

I had a lot of help from some other teams and I wanted to make something that could last our team a long time. Unfortunatly our team doesn’t have access to a CNC machine or welding, so making it would be more costly. I had to make it with brackets and things.

Features:
It is made primarily of 2 x 1 x 1/8 inch aluminum tubing
It has two wood bases
It can hold ten batteries
When equipped with our chargers it can charge 4 at a time
A power strip will be added
Can be tipped back like a dolly for easier transport

Haven’t had the opportunity to prototype it, so I posted here for some first glance feedback.
Here’s the link to the Onshape.
It isn’t accurate to what it would be in reality, but my job was to make a functional for seasons to come battery cart. The combination of all the materials would be ~$580. A lot of this is due to the brackets prices and things. In the final unwelded version I would make some gussets as well.

Took some inspiration from 6090’s cart.

Please let me know any design changes you would see as useful.

I can’t see a lot in what you posted, but you would probably find better service in charging your batteries closer to upright. I don’t mind using a battery in nearly any orientation (though I try to avoid terminals down), but I’d rather charge with the terminals pointing at least somewhat upwards to let gas exhaust. (To be totally honest, the charger stations I’ve designed had the batteries totally upright.)

We have charged our batteries in this orientation for 8 years with no issues. Takes less space than vertical and provides retention while traveling. We have only had one battery try to work it’s way out of our cart in 8 years, and that was when the trailer got a little sideways on some icy roads.

@Keenan, if you want to lower the price consider using all wood. Ours is built from old practice field elements, a harbor freight hand truck, charger, and some surplus SB50s from Ebay. Our total for the whole cart is under $600 including the charger.

Also, is the open space behind the batteries for the chargers? If not, every inch of depth is an inch of pit you give up.

Outside of that it looks good to me.

Thanks for all the suggestions! My thought was if the batteries could be slanted it would make them more vertical during transport and they would be quicker to switch out. The space behind the rack is where the battery chargers would go. I may make some adjustments to its thickness after I add them into the CAD.

Making it out of cheaper materials should be a real possibility, thanks for the feedback.

I may change their resting angle from 30 to something closer to 40, and add straps. I haven’t seen any indication that the orientation of the batteries when they are charged has a serious impact, and I based this off of countless team designs with similar orientations on theirs. Thanks for the feedback!

You may want to add a storage compartment. The little cabinet on our cart contains a battery spill kit, battery beak, log book, cordless tool chargers, SB50 flags, and a bunch of other random junk that would otherwise be easily lost.

Just make sure not to make it so compact that the chargers can’t cool or can’t be serviced if something happens.

This battery cart looks great and my team has charged batteries in this orientation for years with no problem. One suggestion I would make as our cart is very similar to yours, is to remove the front two castors and just put rubber stops in their place. Think of it like a hand truck. With the weight of the cart you dont want it rolling around in transportation and/or your pit every time you lean on it. Also I would suggest on the front of every battery you model in the SB50 connector and route it underneath the batteries so you have nice cable management as well as an easy check to see if everything is plugged in. I would also suggest adding your battery charger in CAD so you can accommodate mounting it. We also added a 6 plug power strip to our cart so we can plug in drills and other items when in the pit. I second the shelf for storage already presented as we have a shelf where our battery beak is kept so we always know where it is.

Here is a picture of our cart for reference 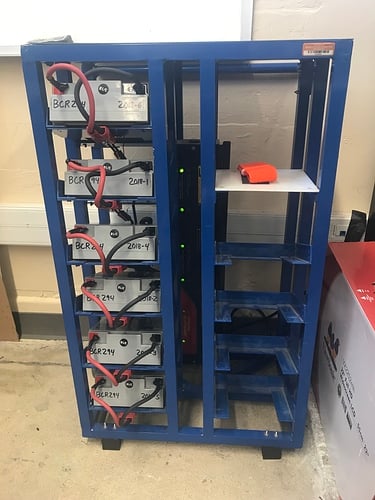 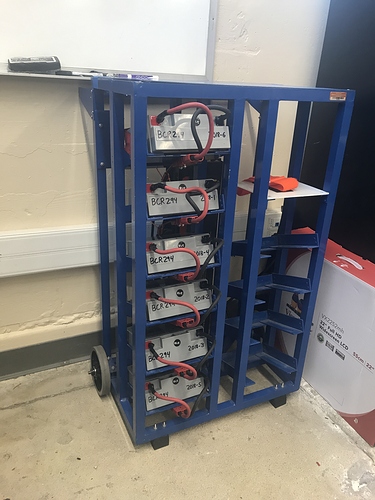 I would suggest checking the center of gravity. Our’s is designed fairly similarly and we have serious tipping problems. I think it should be ok but you should take it into consideration

Unless your trying to keep two teams in batteries, (like an international team) I can’t see a need for that many. Also, ten chargers would be a huge draw on a pit power system if they were all charging. You’ll need a plan to unplug some of them to keep from blowing the breaker in the venue.

Also ten batteries is alot of weight to carry around in your trailer. Alot of expense to buy every year (or two?).

Also, as other’s have mentioned, keeping batteries low is much safer. We’ve actually been told to get batteries lower by safety monitors in a regional. If your batteries were occupying only the bottom of the cart, possibly you could use the top half to store your driver’s station while in the pit? Or a shelf/workbench?

I may change their resting angle from 30 to something closer to 40, and add straps.

Sorry, the rendering I looked at last night looked like it just had horizontal shelves. 30 degrees should be fine.

Unless your trying to keep two teams in batteries, (like an international team) I can’t see a need for that many.

10-12 battery’s is a pretty standard amount. Assuming your playing in however many quals matches per day, plus time at the practice field and elements field. A good standard is to only run one battery one time per day.

We typically travel with around 14. We get 10 new batteries each year and take 4 old ones with us for prematch pressurization and for powering our soldering iron. Having only 4 batteries for elimination rounds can be quite risky as your batteries may not charge back up in time especially during the final rounds.

You’ll need a plan to unplug some of them to keep from blowing the breaker in the venue.

How undersized are your venue fuses?

Assuming a set of 10 modern chargers, no more than 1-2 in the array will be pushing more than 6A at once, a whoppping 72W each - rounding to 100W for efficiency, that’s two lightbulbs. The rest of the array will be running maintenance charges, 1-2A, maybe 20W each, cumulatively a third and fourth lightbulb. 400W of charging on a 120Vrms circuit is a little over 3A.

We run 10 chargers plus drill batteries & laptops and have never had venue limit issues.

I think @hrench was talking about the venue fuses at competitions. One team charging 10 robot batteries plus drill batteries, laptops, and phones probably isn’t a problem. 50 teams doing that is a lot harder on the venue’s electric distribution system. I’ve been to a number of events where pit power fell because teams were collectively pulling too much power. They had to ask teams to limit the number of batteries they’re charging at a time.

That being said, bringing 10 batteries isn’t excessive in my opinion. You want to make sure you have enough to cycle through them without rushing, plus extras for charging pneumatics, practice field, lending to alliance partners, etc. I couldn’t imagine bringing only 4 batteries to an event. You certainly won’t be giving them enough time to properly rest after being used, be fully charged, and then rest again before being used.

I’ve been to a number of events where pit power fell because teams were collectively pulling too much power.

Ah, I see. I haven’t experienced that.

Does FIRST publish guidelines for pit power consumption? I couldn’t find anything in this year’s rules.

#1 We have been charging our batteries at a 15 degrees angle for 10 years and have never had a problem.

#3 There are rarely more than 2 batteries on fast charge, most are on trickle. Power have never been a problem.

#4 Why use only new batteries for comp? Some of our best batteries this year were 1-2 years old.

Why use only new batteries for comp? Some of our best batteries this year were 1-2 years old.

For some teams, 200-300 bucks is a small price to pay to know your batteries will be good for the season. We were very, very hard on our batteries in 2018 with the swerve drive and it showed when we started testing this year. With the MK Batteries discount, we picked up 8 new ones and had no issues all season. I think it just depends on the robot you ran in the previous season and how quickly it drained your batteries though.

This is too few batteries, especially for district teams. If you plan to make a deep run in elimination rounds, 6 is the bare minimum and I’d recommend having 8 if you can swing it. Factor in tie-breaker matches and you can easily be playing 9 matches in the span of about 3 hours for a full elimination tournament run.

The last regional we went to, we were the last team in a row, back to back with another veteran team. The two of us were expected to share one 14ga extension cord. I interpret that as 7.5 amps per team.

We have overhead (LED) lights, we have power tool batteries, we have a 40-inch TV running videos from a laptop. Driver’s station. Then we have four robot battery chargers. Didn’t blow, but we didn’t run about 80 percent of our overhead lights. Didn’t charge the power tools. The team behind us had overhead fluorescent light.

Saying that you’re bringing ten batteries, but only doing the math for two charging means you could’ve gotten by with two batteries. Also, I don’t know the efficiency of the chargers, but charging 6 amps on three batteries isn’t 72 watts. Chargers create alot of heat–I expect they’re something like 75 percent efficient at best. And if every team had ten chargers, that would be a disaster for the venue.

I realize that people commenting on CD are likely to be from veteran teams and apparently ones with alot of money (ten batteries is about $500). Many many teams compete with two or three batteries at best. Bring ten batteries if you like. I don’t think that many are necessary.

ten batteries is about $500

10 batteries are not $500. Call MK Battery, tell them you’re with an FRC team. The price is $34 dollars per battery, free shipping and if you have a tax exempt form they’ll accept that. The battery is arguably the most important part of your robot. If your batteries are garbage your robot will not perform, period. Buy new batteries folks.

You’re also not factoring in district teams that sometimes have 3-4 qualification matches within a 90 minute window. 7457 is a district team in Indiana. I understand 1108 is in the regional system, but I still wouldn’t go any lower than 6 for that event style primarily because of the elimination tournament.