Hello all. Our team has decided this year that our battery cart is too bulky for pit use; so we would like to have something smaller that is more mobile. Do you guys have any ideas/pictures of a possible setup? Thanks!

Have a look at this:

It’s very sturdy and uses vertical space in your pit. It’s also on wheels so you can cart it out like a dolly.

Would you be able to give us a picture or description of your battery cart? That would really help us to give you tips and ideas.

Addition:
finally got around to adding the pics of the carts, so here they are:
note: we only use one at a time, we’ve just made two of them
PS, sorry they’re sideways 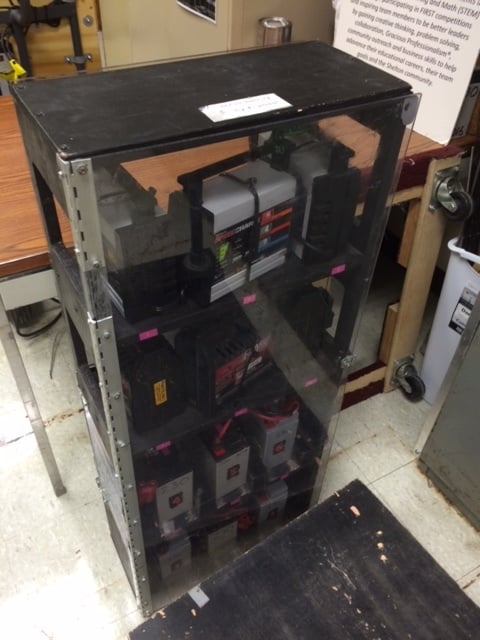 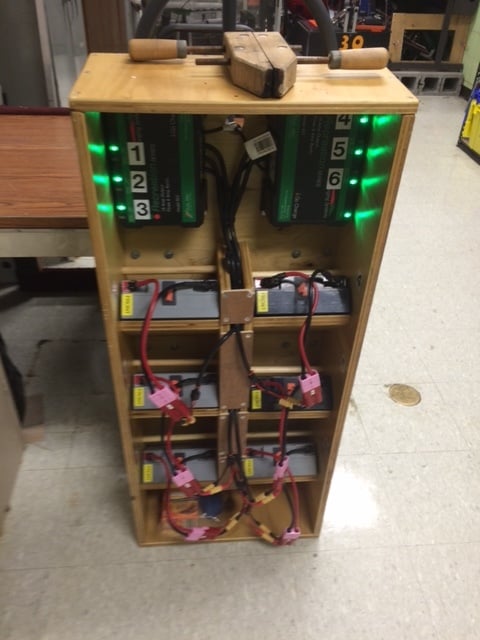 My previous team had a battery cart that was small and compact. It held the batteries horizontally in 2 columns of four batteries each. It looked like a tiny little bookcase with tiny little shelves. It was about 24" wide, 20" tall, 16" deep (I’m guessing from memory here). Each “shelf” was about 4" tall, 9" wide, and 10" deep, e.g. the footprint of a battery laying on its side. Two four-bank NOCO G4 chargers sat on the top of the cabinet so you could access the controls.

It was a squat, stout little thing. You could roll it under a table. The disadvantage of this setup is that it is very heavy. Also, the NOCO G4 only charges at 1.1 amps so it was a little slow.

Our team built a battery cart based off of this one by team 3572. It uses this charger, which I highly recommend if you have the budget for it.

Whatever your team does, make sure that the contents of the cart are secure when moving the cart. Our current cart does not anything to restrain the batteries and chargers. One team member got a bit too enthusiastic when moving the cart and caused several brand new batteries to fall out, cracking their cases, rendering them unsafe to use. I have seen teams using a front cover, Velcro straps or pieces of all-thread running across the cart to restrain the contents.

It held the batteries horizontally in 2 columns of four batteries each.

While storing and using batteries horizontally is not a problem AFAIK, batteries should be **charged **in an upright orientation to allow gasses to vent.

Last year, my team made our own sort of battery “shelf” out of plywood. The front was completely open, and the back had open spaces to run the charger end of the cable through the back where it was secured for easy plugging and unplugging.

It was wide enough to hold three chargers on the bottom shelf and three batteries on the top shelf, and screws were put into it for a power strip to be slid on. We made rope handles to carry it with. Granted, it wasn’t the most structurally sound, but that was more of a team error. Luckily it lasted through competition before breaking.

Our team built a battery cart based off of this one by team 3572. It uses this charger, which I highly recommend if you have the budget for it.

If you go this route, check your local Batteries Plus. We got our for a steal from them.

We personally built one this year using the second shelf of an old tv cart. It houses not only our robot batteries in an upright position but also holds our power tool batteries. The entire thing costed us $5.00 for some 1x2 wood, and wood glue. The cart was found for free in ours schools basement. The nice thing about it is its a great laptop workstaton and there is extra storage for our drill bit box, drills, and chargers underneath.

While storing and using batteries horizontally is not a problem AFAIK, batteries should be **charged **in an upright orientation to allow gasses to vent.

While I agree that it is better to charge batteries upright, it is not an actual requirement. Case in point one the the SLA batteries in my office UPC is mounted upside down. The FRC style batteries should not vent in normal operation or charging using a FRC legal charger. It your SLA batteries are venting during charging, you should replace your battery or charger.

I don’t have a picture of ours right now, but definitely make sure you allow for space for chargers for all of your cordless tools as well. We also have an extra, empty power strip mounted on the cart in addition to the one that feeds the chargers, which makes for a really convenient place to plug stuff in in the already busy and crowded pits.