I need to grab the software and try that too…

Yeah, I’d really like to get where we have something cheap that does stored energy!

I love when my actual day job is relevant to FRC

So I’m a battery engineer, one of the big parts of my job is running performance tests on battery packs. Typically you want to use a reasonably low amperage draw when testing capacity of a battery, and a high amperage when testing performance/max output of batteries. The reason testers like the CBA one take forever is because they do the former, discharge your battery at a low current to measure capacity. Because we use SLA packs, performance is less of a concern because you can draw a stupid amount of amps out of them during a match and the battery will be more or less fine. The bigger issue we’ve seen is batteries with bad capacity being used in matches and causing brownouts and other performance issues.

Tl;dr when looking at battery testers, low and slow is generally a good call if you want to accurately measure capacity

What we need is capacity at an operational current level. A screening and comparison tool. We don’t actually care about the low current capacity!

I think the ideal tool would pull 50 Amps (the Anderson rating), but it doesn’t exist yet.

I’ve been using a 12 Amp rate tester, which allows two tests per robotics meeting vs one for the CBA!

Wouldn’t pulling that much current for an extended period of time damage the battery?

@swurl Yes, normal match operations do permanent damage to our batteries. However, if you don’t deep discharge them it’s not very much damage per cycle, and you get a hundred or so cycles.

So far the BD250 looks promising. I’ve got two tests on it. The display changes from mAhrs to Ahrs at 9999. Annoyingly, it defaults the decimal point in the middle, so you need some knowledge to tell if its battery Voltage or Ahrs as it toggles. Made more complicated by Voktage recovery after the test… Plugging USB power into it means it won’t shut down, even with a wonky battery.

Comparing BD250 data (column 3) and my other tester. No significant difference! 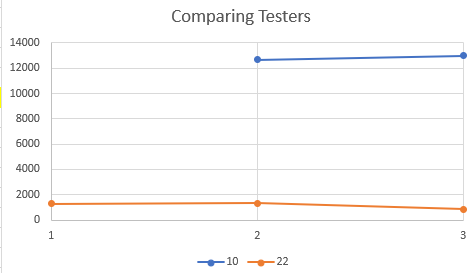 You can also use old parts from storage to make a cheap or free controllable load for testing. Mechanically couple together the shafts of pairs of CIM motors: one with the wires shorted together to act as a brake, and the other hooked up to an old motor controller. I would probably also wire up a 120mm fan for some cooling. With a little bit of code in an Arduino or RoboRIO and some sensors for voltage/current you have a nice variable load tester.

Having acquired 12, 100 Watt rated resistors and scrounged a honkin’ heat sink, I’m under way on a high current tester. Laid out, 26 4-40 holes threaded, plus another half dozen for other goodies.
Stuffing, crimping, and soldering. Player is tired…

I got it buttoned up last night! I’m really happy with how it came out. I need to come up with a nice labelling scheme. Maybe instructions on the cover for the cooling chimney… I need to think up a way to make it look nice. And a good “R” logo in the corner.

Not that anybody besides y’all will ever see it.

I was worried that the heat sink was excessively large… It gets blazing hot when you dump 583 Watts in it! Ok, -I- can touch it, so its not crazy high. I need to think about it and see if I could get the fan to go across more of the fins. Hmm.

The first test was quick, as expected. At about 54 Amp load I got 8.12 Amp Hours of capacity for battery number 10. About a 9 minute test! At a 12 Amp rate (my other two testers) I got 12.7 to 13 Amp Hours. This looks like a good tool for pre-competition battery testing. Its not something other teams are going to replicate easily, though. A less complex tester might use the coloumb meter I got, a 600 Watt 12V water heater element in a water pot, and a 100 Amp relay. I’m pretty happy with that meter (DCM9040); it has a LOT of parameters that must be set right, but once you have that then controls wise you get a clear “start/stop test” button (the middle one), and re-setting the count is just press and hold the A/Ah button. Being able to look at Voltage, Amperage, Wattage, Ahrs, and hrs is nice too. The low voltage stop is a nice and crisp setting. One thing I’m unhappy with is that the “relay on” LED on mine is dead. It took a while to work that out…

I need to get some solid data to go with it, but my “10% capacity” cruddy cell crashed almost immediately at 50 Amps. I’m suspicious that you could do a short term test with a classic automotive battery tester to weed out “shorted cell” batteries. I might have to test that too.

Any opinions on the idea of converting a classis 100 Amp load tester to Anderson connectors? The instructions say to load the battery for 10 seconds and read the meter under load. A good battery will have delivered 0.28 Amp Hours during that test and will pull down by 2-2.3 Volts or so. Based on my very quick first test that might be enough to completely crash a shorted cell/junk battery. 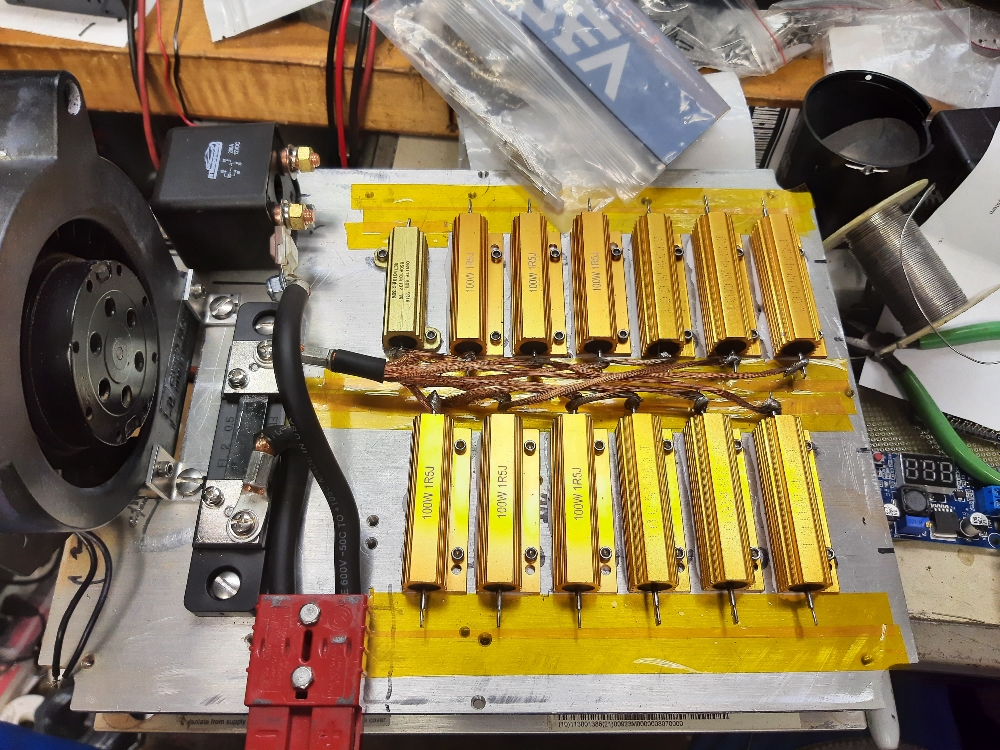 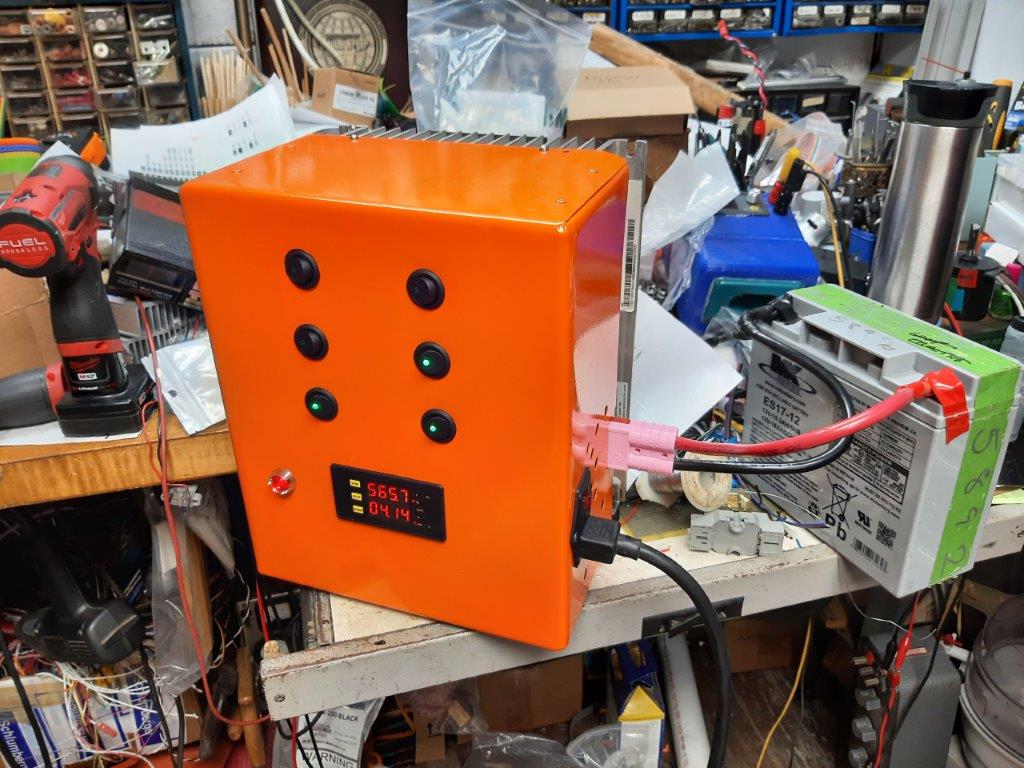 Any opinions on the idea of converting a classis 100 Amp load tester to Anderson connectors? The instructions say to load the battery for 10 seconds and read the meter under load. A good battery will have delivered 0.28 Amp Hours during that test and will pull down by 2-2.3 Volts or so. Based on my very quick first test that might be enough to completely crash a shorted cell/junk battery.

Yes that will quickly indicate a dead/shorted cell. I just use mine with the factory installed clamps and use an old battery connector, a chunk of plywood and a couple of bolts to have something to clamp on.

There’s this thing which is kind of like a larger Battery Beak. SB-300; Technician Grade Intelligent Handheld Battery Tester For 6V & 12 Applications. Not sure how good it would be for FRC applications.

After I recharged it for an hour, I hooked it to my 100 Amp tester. -4- seconds brought it down to 8 Volts where it stayed for the next 6 seconds!! I need to repeat this test with a decent battery…
Here’s the video: https://youtu.be/q2sYL4yIWxg

This seems to be their model more suitable for use with FRC sized batteries. RC-300; Technician Grade Intelligent Handheld SLA and STANDBY Battery Tester For 6V & 12 Applications

Huh. I remember reading that discharge rate didn’t have a significant effect on our battery capacity, so I could extrapolate from low-current CBA readings. Your results suggest otherwise!

I would definitely like to know if there is a bigger difference between high-current and low-current test results for “bad” vs “good” batteries. If there is, we’ll have to rethink our testing regime.

Huh. I remember reading that discharge rate didn’t have a significant effect on our battery capacity, so I could extrapolate from low-current CBA readings.

As mentioned the rated capacity does depend significantly on the discharge rate. What everyone fails to mention though is that testing is based on a single continuous drain to a cut off voltage. Take battery A and discharge it at the 20hr rate, remove the load let is sit and the battery voltage will stay pretty stable and you won’t be able to get any more energy out of it. Take battery B and discharge it at the 3C rate, remove the load, let it sit, the voltage will rebound and you will be able to get more energy out of it.

Essentially a high discharge rate creates a surface discharge since the reactants can’t move to the plate surface fast enough. Once the load is removed the reactants can get themselves to where they can react and release more of that stored energy.

There certainly is some correlation between the different rates and you can expect that if the low current capacity is reduced X % the high current capacity will be reduced even more. One of the things that occurs as lead acid batteries age is sulfation, which basically reduces the available surface area for reactions. That means the high discharge capacity reduction will be higher than the low discharge rate capacity reduction.

So a low discharge test isn’t irrelevant but it can hide a battery that can’t reliably provide the type of discharge current that today’s FRC robots can demand.

One of the challenging bits about a high current test is that the internal resistance produces a significant voltage drop; the effective terminating voltage is higher than you would have at lower current.

I was able to see the voltage recovery described above on all of my tests; its definitely a big factor with high currents.

Looking at the battery tester linked above, its got to be working similarly to the Battery Beak and the classic car battery testers: very short term. There’s no heat transfer surfaces… The Amp-hour rating it gives you has to be assuming a LOT about the battery.

Looking at the battery tester linked above, its got to be working similarly to the Battery Beak and the classic car battery testers: very short term. There’s no heat transfer surfaces… The Amp-hour rating it gives you has to be assuming a LOT about the battery.

The descriptions for the testers linked by sanddrag and I state that they use a pulsed 40a load. Unlike the battery beak it does multiple pulses and evaluates the voltage rebound curve. Like the Battery Beak, the results are based on knowledge of the published specifications of battery being tested. With the BB it is programed to test the FRC battery, in the case of the RC-300 I linked it requires the user to tell the tester the original specifications of the battery being tested. It even allows you to save the profile of a battery (hopefully a brand new one) and then compare against that to give the most accurate state of health and capacity readings.

Based on the description, for what that is worth, the RC-300 is far and away the best tester I’ve seen that is designed to test the batteries used in FRC. Unlike the CBA it doesn’t do a deep discharge and reduce the battery life, so it is safe to use frequently. Plus it is much cheaper than the CBA once you add in the cost of the amplifier needed to do a high current drain. Unfortunately with a street price of over $400 it still isn’t cheap.